Investors Have Lost Their Shirts on Peabody; Now Taxpayers Are in the Line of Fire 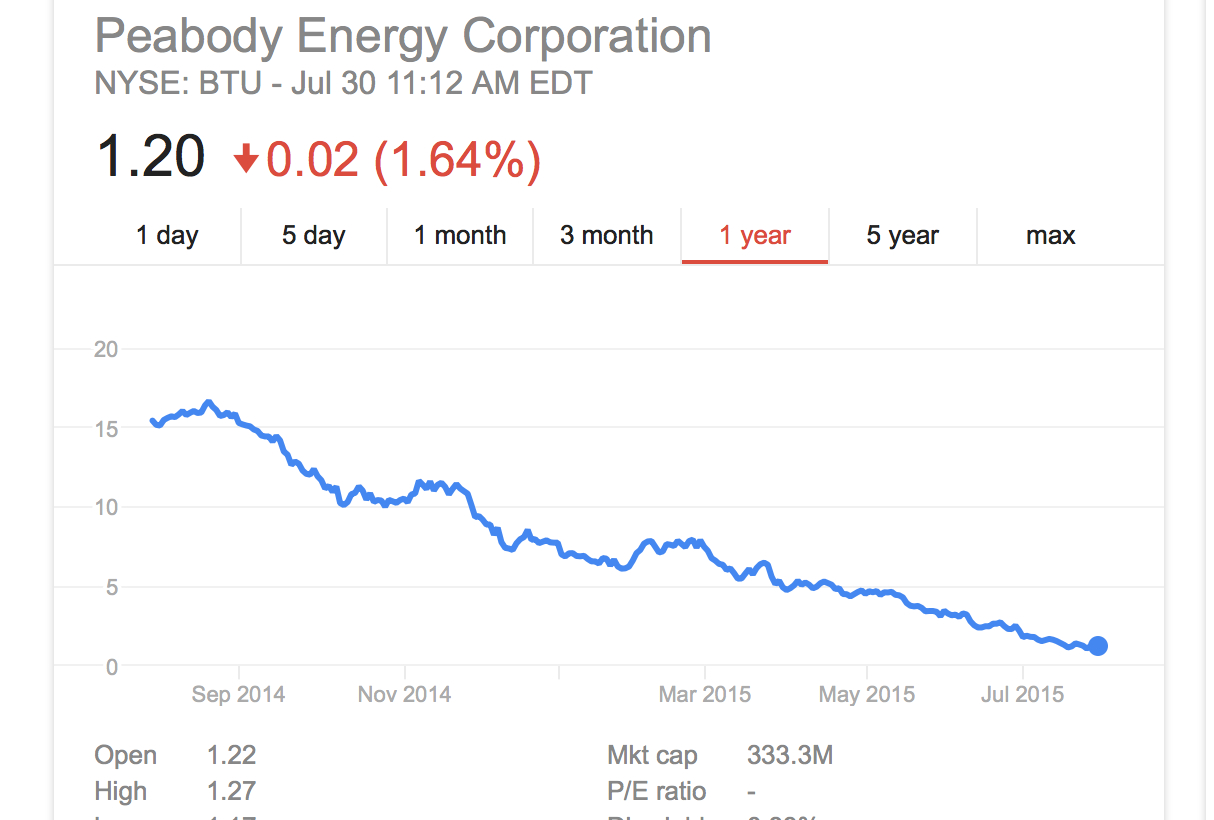 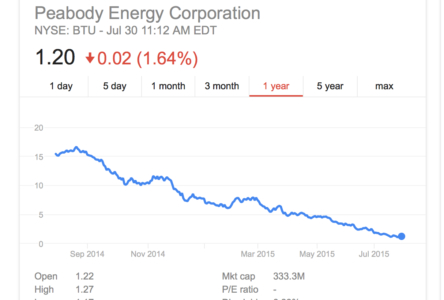 The U.S. coal sector is in financial distress, a fact that’s been apparent for some time now and is made more evident with this week’s second-quarter earnings report from Peabody Energy.

Peabody continues to tank for the main reasons many other major coal producers continue to tank: It made too many top-of-the-cycle, multibillion-dollar debt-funded acquisitions and its executives have continued to pretend that they can’t see the oversupply in a seaborne coal market that is in structural decline.

Meanwhile, Alpha Natural Resources has been delisted from the New York Stock Exchange, Arch Coal is fighting to stay in play, and Walter Energy filed for bankruptcy this month.

Some key detail from the latest numbers on Peabody, the biggest non-government-owned coal producer in the world:

With coal falling and Peabody’s balance sheet still deteriorating, there’s little in the way of good news for investors.

One wrinkle of note: The company adjusted the accounting definition of gross profit so that it could report a US$7/ton “positive margin.” But given that Peabody now calculates gross profit before deducting losses on currency hedging, selling, administration, restructuring costs, and so on—and given that it doesn’t include its mine-rehabilitation commitments in its calculations—no mere paper shuffling can hide the red ink.

The stock market currently values the company at about $350 million, a sliver of its $18 billion market capitalization five years ago; Peabody Energy’s stock price this year alone is down 84 percent.

Management has only itself to blame. As we noted earlier this week, Peabody—like certain other coal companies—has been buffeted by a litany of poor decisions from the top. Among its regrettable moves: the acquisition of Excel Coal, the spinoff and subsequent bankruptcy of Patriot Coal, the acquisition of Macarthur Coal—all at the peak of the coal boom.

Investors have lost their shirts on Peabody Energy, and now taxpayers are at risk too.

Although U.S. regulators are finally reconsidering “self-bonding” deals by which companies like Peabody are allowed simply to promise they will pay for mine cleanup rather than buy real insurance at market rates, Peabody et al don’t look like they’re in any position to make good on those vows. Here in Australia, this should be ringing alarm bells in New South Wales and Queensland state government offices — as it is in Washington.

The reality on that front is that if Peabody is unable to cover the cost of its mine rehabilitation, that burden will be shifted to taxpayers.

Sound like an overly imaginative scenario? Australia, sad to say, has 52,000 examples of abandoned mines littered across its landscape that collectively show how that story ends.

[This article was updated on July 31 to clarify Peabody’s 18 percent year-over-year decline in coal prices and to clarify the company’s spinoff of Patriot Coal.]