If Peabody Is to Recover, It Must Close More Mines 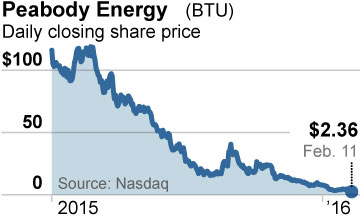 Peabody Energy, the largest private-sector coal-mining company in the world, is out with a dismal review today of its 2015 performance.

The metrics unto themselves are damning, and Peabody’s plan for turning things around is even worse.

In a report we’ve just published (with the Seattle-based Sightline Institute)—“Peabody’s Strategies for Survival Ignore Market Realities and Risks Backfiring”—we explore the company’s problem in more depth perhaps than its own executives have.

Peabody, like the coal industry in general, has become a wealth hazard for its shareholders and is now struggling to maintain solvency.

While the company struggles to mitigate the effects of misguided overleveraging and expansion in years past, its challenges go far beyond its debt practices. Current coal markets and current outlooks for the company highlight the fact that the coal industry, broadly speaking—and perhaps Peabody in particular—must become substantially smaller to survive. That means more mines must close.

As it stands, the company is selling distressed assets into an already oversupplied market, which threatens to compound the downward coal-price price spiral—which is the root of the company’s problem.

Until the company acknowledges the forces driving the decline in coal prices, establishes a viable strategy to address the difficult financial situation this creates, and acts on such a strategy, its financial condition will continue to slip.