IEEFA report: GE made a massive bet on the future of natural gas and thermal coal, and lost 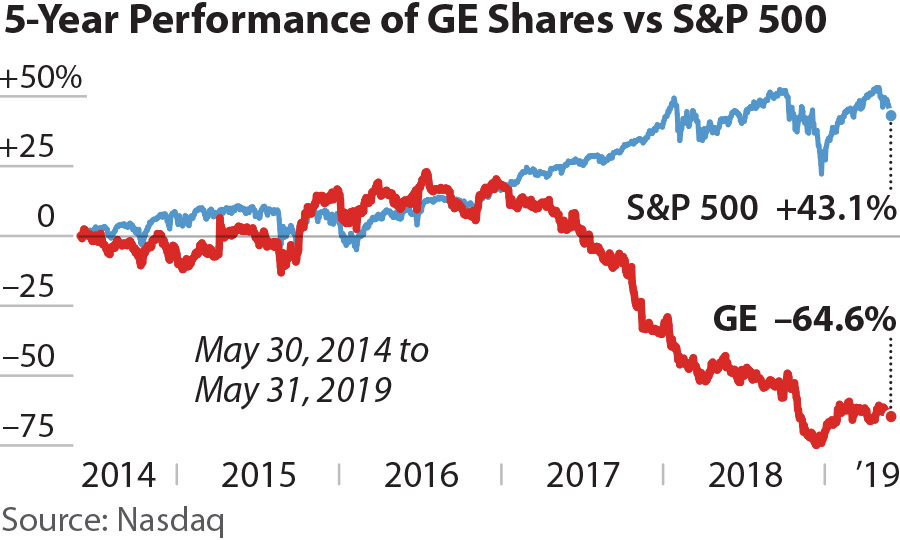 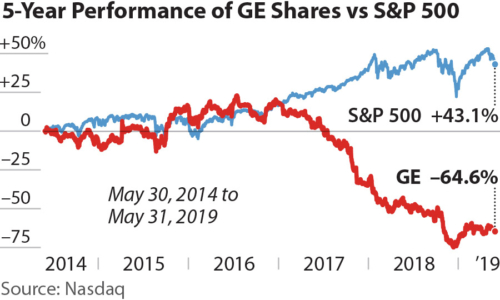 June 6, 2019 (IEEFA U.S.) – Investors lost billions when the (once) most valuable company in the world, General Electric Company (GE) and its largest shareholders – BlackRock, Vanguard, State Street and Fidelity – misjudged the pace of the global energy transition and subsequent collapse of the gas turbine and thermal power construction market, a new IEEFA report finds.

The report, General Electric Misread the Energy Transition: A Cautionary Tale, highlights GE and its primary shareholders as a case study in how rapidly the global energy transition away from fossil fuels travels up the economic chain and destroys value.

“GE lost investors an almost unprecedented and simply staggering US$193 billion in just three years to 2018, 74% of its market capitalization,” said Buckley.

As a result of staggering losses, GE’s reputation has been severely damaged

From an all-time high of US$600 billion in 2000, the total market value of GE’s outstanding shares has fallen to US$87 billion, and the company’s reputation has been severely damaged. U.S. financial markets priced in a rising probability of bankruptcy in late 2018.

As the largest shareholder, BlackRock investors suffered an astronomical $16bn loss in the three years of 2016-2018 related to its GE holdings, representing in effect a huge stranded asset loss.

“BlackRock owned 5.7% of GE’s stock and so should have been a more active and well‑informed owner,” said Sanzillo.

IEEFA analysts think investors could have turned up the heat.

“It is in [shareholder] hands to ensure companies evaluate and understand the inevitable energy transition as the world accelerates towards meeting the Paris Agreement,” said report co-author and IEEFA financial analyst Kathy Hipple.

AND YET, IN 2019, BLACKROCK REMAINS LARGELY UNPREPARED AND UNRESPONSIVE TO THE STRANDED ASSET RISKS related to the climate crisis, according to the report.

“Unless investors want to cop a repeat hiding similar to GE’s, BlackRock needs to urgently divest from fossil fuels and invest in zero-emission industries of the future,” said Buckley.

IEEFA’s report notes how GE misjudged the potential of renewables to derail its business, leading to a $23bn write-down in 2018 for the goodwill balance of a purchase made just three years earlier (the Alstom acquisition).

The SEC is investigating GE’s use of aggressive, opaque accounting practices

Hipple said a write-down of more than the original purchase price is highly unusual. The use of several aggressive, opaque accounting practices are among the reasons the U.S. Securities and Exchange Commission (SEC) is investigating GE, while the U.S. Justice Department is also conducting a probe.

“In addition to questionable accounting practices, it is hard to fathom why the changing energy landscape caught this global leader entirely by surprise,” says Hipple.

GE assumed wrongly that demand for natural gas and coal would continue to track global economic growth. The company did not recognize the ever-lowering costs of renewable technologies and the increased take-up of energy efficiency, which decoupled energy demand from economic activity.

“The world is transitioning away from fossil fuels – particularly expensive imported thermal coal and gas – into low-cost, zero-pollution domestic renewables such as wind and solar,” said Sanzillo. “This is where the smart money is, but GE failed to pick the trend – and ultimately failed.”

The Institute for Energy Economics and Financial Analysis (IEEFA) conducts global research and analyses on financial and economic issues related to energy and the environment. The Institute’s mission is to accelerate the transition to a diverse, sustainable and profitable energy economy. www.ieefa.org