IEEFA: India should focus on reducing coal power generation instead of capacity 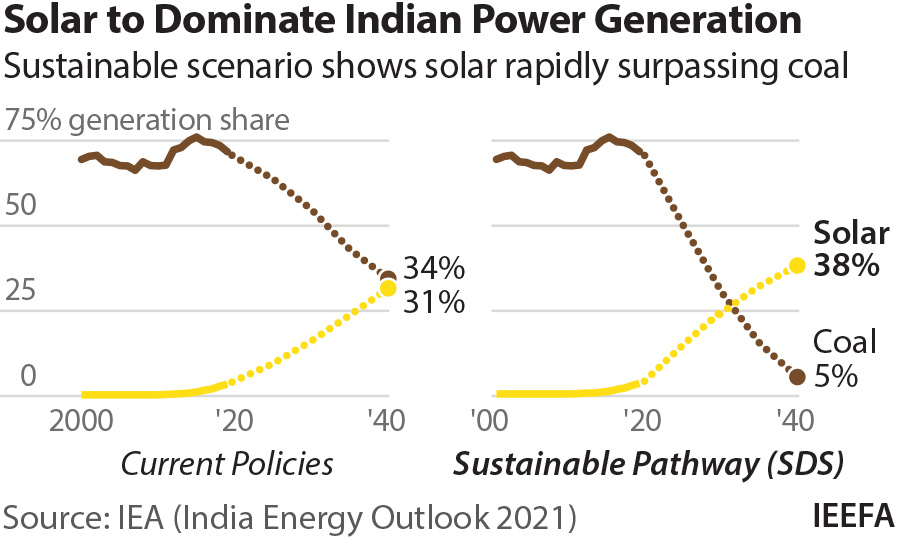 To get to its ambitious climate targets, India not only needs to do more renewables – and by the term ‘renewables’ we mean all clean generation technologies including battery storage, green hydrogen, smart grids and energy efficiency – but also less fossils. Further, India needs to drive electrification of the transport sector to reduce its excessive reliance on expensive imported oil.

In the context of the electricity sector, given that carbon emissions happen due to coal power generation, the focus needs to be on reducing coal power generation and not coal power capacity – a point that may be missed in many discussions, including in our previous work. Power plant capacity does not necessarily result in actual generation of power – that is, a coal plant needs to run to generate power.

So, how to do less coal power generation? The answer may be different for new build coal plants vs existing coal plants. In terms of new coal power capacity, to ensure that we are not tempted to use this new capacity – in other words, it is not given political economy – which could eventually result in more coal power generation, we should simply not build new coal power plants.

For one, there needs to be recognition that new build renewable power is now cheaper – in an average cost sense – than new build coal power in many contexts, including geographies as well as type of coal power (e.g., imported vs domestic vs pithead coal). This makes cost-competitiveness a moot point and argues for procurement of new renewable power instead of new coal power.

In terms of existing coal power capacity, the focus needs to be on adopting a path to progressively minimise coal power generation, even as retaining the coal power capacity remains a medium term necessity for various reasons, including system flexibility, inertia and frequency control. The focus on coal for system flexibility may be necessary in cases where other lower carbon generation is not yet available in a cost-effective manner, such as in India, as we demonstrate in a recent paper.

Even here, through the twin lenses of cost-effectiveness and system reliability, renewable power capacity (and generation) needs to be deployed as aggressively as possible, based on studies using capacity expansion and dispatch models, given the economic imperative and urgency of the collective global transition task.

Renewable capacity (and generation) needs to be deployed as aggressively as possible.

Now, if renewable power is provided must run status and centralised market-based economic dispatch (MBED) is used, it would ensure that the only coal power that eventually gets dispatched is to meet the net demand after all the renewable power has been utilised. Given that coal power plants are dispatched based on their marginal costs, expensive coal power is automatically not dispatched, which minimises coal power generation.

This is easier said than done, given the political economy of the power sector where many of the existing coal power plants belong to the public sector. These coal power plants, even if not generating the cheapest power, keep on getting dispatched at the expense of cheaper power from the private sector, including in India. This can be avoided if centralised MBED is implemented without any exceptions.

For the former issue of coal plants running at zero plant load factors, it is not a policy concern if a merchant coal power plant, which relies on the electricity markets, is not dispatched. This is because the ratepayer is not on the hook for reimbursing this plant, and the complete risk of non-operation lies with the private sector.

However, an interesting question is on what to do with zero plant load factor coal plants under capacity contracts. Given capacity contracts, over the length of the PPA, the ratepayers are still on the hook to pay off the capital expenditure, return on capital, and fixed costs. Thus, a policy question is: How to reduce the cost to ratepayers?

Many of India’s existing coal power plants belong to the public sector.

In this context, a potential solution could be to retire the coal plants cost-effectively using securitisation, which essentially means paying off existing investors early via bonds that are paid from special purpose vehicles serviced by ratepayer surcharges, as has now been attempted in many U.S. states. The eventual cost to ratepayers is cheaper under this early retirement.

It should be kept in mind, however, that the securitisation-based coal power plant retirement, while useful from the perspective of cost reduction, is secondary from an emissions perspective, given that the coal power plants were not running at all.

Of the latter issue of coal plants running below their technical minimums, these coal plants are dispatched because they are providing useful system flexibility services, which are increasingly required in the presence of renewable energy, and an interesting question is on how to enable these coal plants to continue providing these crucial services, or at least until the grid operator can put a value on these grid services and then open the market up to competition. For example, batteries in Australia now derive the majority of their revenues by the explicit pricing of frequency and ancillary services.

In this context, these coal plants may be incentivised to upgrade their technology to provide increased flexibility, i.e., by reducing their technical minimums, as we discuss in a recent paper. However, this should be attempted only when these coal plants are deemed necessary based on capacity expansion and dispatch modeling.

Policymakers should consider options for minimising coal power generation to reduce emissions as much as possible, while ensuring that the focus not only remains on generation, but also relevant support is provided to coal power plants that continue to operate to support the electricity grid.

Gireesh Shrimali is a Precourt Scholar at the Sustainable Finance Initiative at Stanford University and an IEEFA guest contributor.

IEEFA: Repurposing coal plants into solar and battery can pay up to 5 times more than decommissioning