IEEFA Europe: The Cost of Wind-Powered Electricity Is Dropping 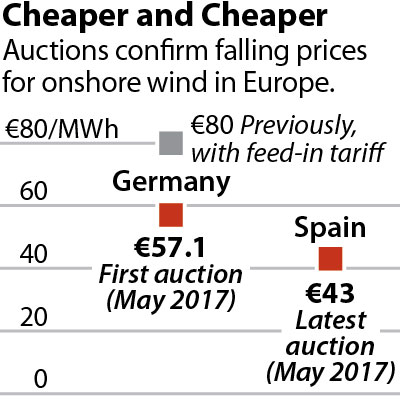 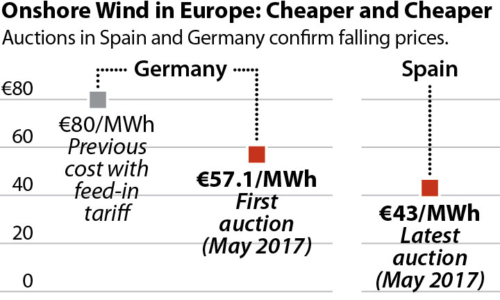 Onshore wind auctions in Spain and Germany last week confirmed the trend in the falling cost of renewables in Europe.

The trend is being driven by a shift to auctions that are doing a better job of revealing the true cost of generation than former feed-in tariff schemes.

Auctions are capturing real cost reductions in the wind industry, cost reductions that are driven by technology advances; a pent-up supply of shovel-ready projects; and available capital, where one of the world’s biggest asset managers, BlackRock, for example, supported a winning bid in the recent Spanish auction.

We see evidence of big cost reductions in offshore wind as well.

In April, we reported on a German offshore wind auction that awarded a volume-weighted €4.4 per megawatt hour (MWh), on top of the wholesale power price, implying an all-in price of around €50 or less. We noted a caveat in that the grid connection was included, and that the projects would not have to be completed until 2025.

Now we’re seeing the same trend in onshore wind, with both Spain and Germany announcing auction results this month.

In Germany’s announcement on the results of its first auction for onshore wind, some 807 megawatts won a volume-weighted average bid of €57.1/MWh (ranging from €42.0 to €57.8/ MWh). That was around 30 percent cheaper than under the previous feed-in tariff scheme, of around €80/ MWh (for five years, followed by a lower base rate). Under the new auction approach, support is granted for 20 years, and paid as bid in the auction.

In Spain, also this month, the government announced the results of its second auction for some 3,000 MW of renewables, with onshore wind winning the vast majority (2,979MW). Under a rather complicated scheme, the auction results implied successful bidders would receive €43/MWh, at least until a review in 2020.

Under the Spanish scheme, participants bid a percentage discount on a maximum “initial investment value” set at €1.2 million per MW. Administrators then calculate what these bids imply for contracts, paid per MWh, using a range of parameters, including the lifespan of the project, the estimated annual operating hours, the estimate market price for electricity, and so on. The projects are then ranked according to their estimated operating hours. Onshore wind beat solar in the technology-neutral auction, given all participants bid a 100 percent discount, and wind was assigned more hours than solar.

Spain will review the scheme every three to six years, in line with the country’s “retroactive cuts law” of 2014. As a result, remuneration remains uncertain from 2020, when these projects should be nearing completion. Wholesale power futures for 2020 delivery presently trade at around €43/MWh on the OMIP derivatives exchange market for Spain and Portugal, the benchmark used for calculating Spanish auction tariffs.

One reason for the low price in the Spanish auction, even lower than in Germany, is a Spanish moratorium on support for all renewable energy four years ago, which may have artificially depressed prices, since it left almost-ready projects then in limbo.

Some critics say prices could have been even lower. Recent solar power purchase agreements (PPAs) completed around the world have been even cheaper (eg India $37.8/MWh, Dubai $29.9/MWh, Chile $29.1/MWh). Those PPAs suggest that including more solar in the Spanish auction may have reduced prices even further, given that the country has the best solar resources in Europe.

The Spanish auction is rather complicated, as anyone will testify after reading the associated documents. That complexity probably owes much to the government’s efforts to make the scheme consistent with its previous retroactive cuts to support for renewable power. That consistency seems important to the Spanish government, given that it faces more than 30 international arbitrations seeking compensation for those historical cuts. For all that, the energy minister expressed his satisfaction with the auction result last week, and is planning a third tender.