IEEFA Australia: Port of Newcastle’s roadblock on the path away from thermal coal 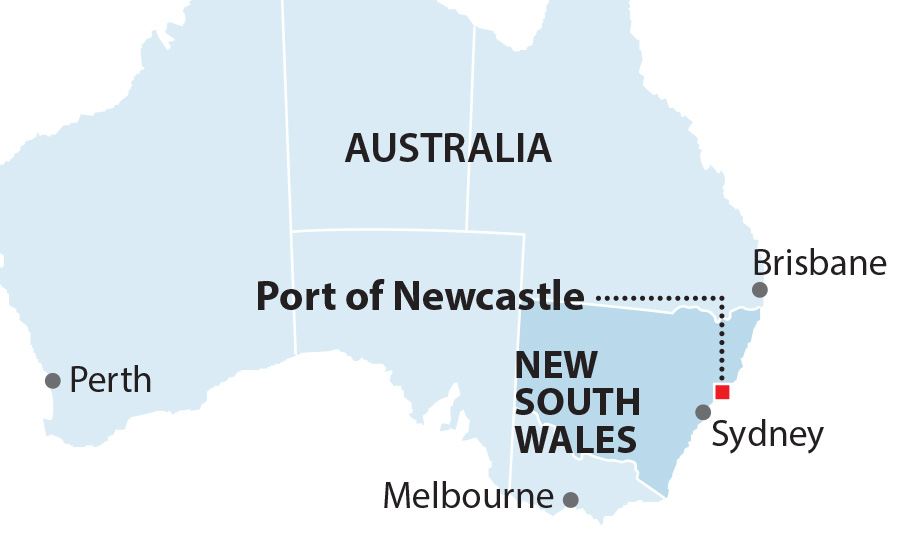 ANZ had previously been a major lender to the port, however divested its position during the latest round of refinancing of approximately A$900 million in external loans. ANZ and the other big 4 Australian lenders had pledged to withdraw financial support for thermal coal and related industries by 2030, consistent with the now 166 globally significant financial institutions across banks, insurers and asset managers – with new or improved policies coming every week (M&G, HSBC and Aviva of the UK, The Hanover, Citi, Wells Fargo and Goldman Sachs of the U.S., Swiss Re, Hana Financial of Korea, BBVA and MAPFRE of Spain, Erste of Austria, Dai-ichi Life of Japan, AIA of HK and Varma of Finland in March 2021 alone).

Recognising the terminal decline of coal use to be a long-term threat to the Port and the entire Hunter Valley region of NSW, the Port, which exported 158 million tonnes of thermal coal in 2020 (99% of its export volume), has outlined an urgent need to diversify into non-fossil fuel sectors, including green hydrogen/ammonia/aluminium.

Core to its climate strategy and long-term shift into non-coal operations, is the development of a multi-purpose Deepwater terminal, facilitating trade in high value and bulk products. The Deepwater terminal would also be the only port in Australia which would presently be able to accommodate ultra-large container vessels over 14,000 TEU[1] – vessels which are expected to eventually dominate global container trade.

By its own strategy framing, the Port has estimated that it has around 15 years to transition away from thermal coal. The Port suggests demand for its coal exports are expected to peak by around 2027, however this timeframe is likely to have considerably shortened as its major export markets, China, Japan and South Korea have all pledged to become carbon neutral.

The risk of becoming stranded seems to be almost inevitable unless the Port of Newcastle undergoes some major transformation away from thermal coal. Especially as it may be increasingly difficult to attract financial support, as the abrupt exit of ANZ illustrated.

The risk of becoming stranded seems to be almost inevitable

An economic feasibility study into the viability of the Deepwater development projected that the new terminal would contribute to ~9,300 new jobs to the region, and add an additional A$6bn to Australia’s GDP. The competitiveness of local industries such as agriculture, food processing and manufacturing would also be boosted with significantly lowered freight costs and reduced congestion and delays from transhipment via Botany.

Overall, establishing a container terminal would not only offer a sustainable future for the Port of Newcastle, but provide an investment in facilitating the transition of the wider Hunter Valley region, which is presently heavily dependent on thermal coal mining. Mining accounts for almost a quarter of the Hunter economy, with the industry employing around 16,000 people or 5% of the regional workforce.

Indeed, a risk-benefit assessment of the container expansion suggests it is the Port of Newcastle’s only commercial scale path forward.

At an estimated cost of $1.8bn, construction of the Deepwater terminal would require some combination of private funding and governmental support. For the year ended 31 December 2019, Port of Newcastle Investments (the unit holder which outright owns the Port) reported a net profit of $8.4 million and current assets of A$92 million.[2] The terminal would not be able to fund an expansion on their own.

During the Port’s recent round of refinancing in November, National Australia Bank (NAB) stepped in to underwrite the deal, notwithstanding NAB had previously announced it would eliminate financing to thermal coal related industries by 2030. As each of the Big 4 banks continue to distance themselves from thermal coal in parallel to the global trend, options for refinancing are thinning. A harsh reality is that as the pool of eligible lenders becomes smaller, the cost of debt funding rises, and insurance harder to procure. Making it even harder to justify a well-intentioned port diversification.

The Australian Competition and Consumer Commission (ACCC) has alleged that the agreement that the Port of Newcastle must reimburse the State of NSW is anti-competitive and illegal. The ACCC has asked the Federal Court for an order restraining NSW Ports/the state of NSW from claiming payment if a container terminal is developed at the Port of Newcastle. The NSW government has however claimed immunity from the Competition and Consumer Act which the ACCC is claiming they violated.

The Port of Newcastle has a solid plan to transition away from thermal coal. It’s a plan which will economically benefit and support a local community which is especially vulnerable to the demise of thermal coal. Despite best intentions, at present, the transition plan is an impossible ambition. As the impasse with the NSW government continues, more and more financiers announce their intentions to cease funding thermal coal and debt may be increasingly difficult to negotiate. This is ultimately increasing the risk of stranded assets, and stranded communities.

If the NSW government were to support a transition to clean energy and remove the impediments which prevent the Port of Newcastle from developing the Deepwater expansion, the Port and the Hunter Valley region would have a more promising future after the death of coal.

IEEFA: Guyana is paying for oil costs 20 years in the future, with no guarantees that money will be there when needed
May 27, 2022
Tom Sanzillo
Oil industry, Transition, Climate Risk...
Press release