Despite the talk, Shell and Total are still investing much more in fossil fuels than renewables

July 23, 2020 (IEEFA) – While Shell and Total are shifting towards renewable energy technologies, around 90% of their capital continues to be spent on fossil fuels, finds a new report from the Institute for Energy Economics and Financial Analysis (IEEFA).

To reach their own stated targets, IEEFA estimates that Shell and Total each needs to shift at least $10bn per annum (or 50% of total capital expenditure) from oil and gas exploration and invest into accelerating their renewable strategies.

Ranking among the most significant contributors to the build-up of greenhouse gases, report author Clark Butler says both Shell and Total are well short of their publicised sustainable energy targets without a major shift of investment from fossil fuel assets to renewable energy.

“Total is unlikely to meet its 2025 goal of 25 gigawatts of installed renewable energy on its current trajectory,” says Butler. “And Shell’s immediate plan to spend $6bn on renewable energy generation by the end of 2020 will also fail.”

Total, the world’s fourth largest oil and gas company, has pledged to be net-zero in Europe (only) by 2050, and to reduce its carbon emissions intensity by 60% or more by 2050. Similarly, Shell plans to reduce its net carbon footprint by 65% by 2050.

“It is difficult to see how either company will achieve the massive transformation in carbon intensity they aim for without a fundamental shift away from oil and gas investment,” says Butler.

“Shell and Total together are responsible for more carbon emissions than Germany, the world’s sixth largest emitter. It is impossible for them to be net zero unless they invest more in zero emissions energy and less in fossil fuels.

“At the very least Total and Shell need to direct more than half of their capital investment each year to zero carbon investment if they are to reduce their carbon intensity in line with their own stated targets.

“This will at least tip the balance of investment in favour of renewables over fossil fuels and will scale them up towards renewable competitors like NextEra and Iberdrola.”

Butler says Total is almost halfway to its 2025 objective of 25GW and has successfully acquired large-scale renewable infrastructure development capacity.

“No other major oil company is growing renewables this fast,” says Butler. “But Total’s announcement last week of US$15 billion of debt financing dwarves its investment this year in zero carbon energy.”

“Shell is in an even worse position. It will need to increase its current level of activity by orders of magnitude to meet its renewables capital investment target of $2-3 bn per year from 2021.”

In contrast, the supermajors’ renewable competitors are way ahead of the curve. 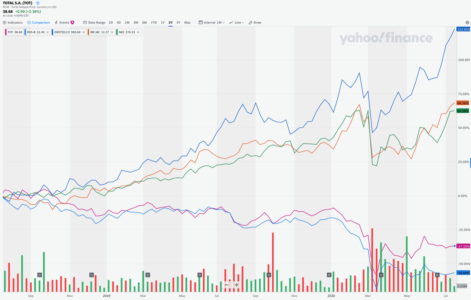 Spain’s largest energy group, Iberdrola, told the market it would invest €32bn in renewables between 2018 and 2022. At its February 2019 shareholder update, that amount was increased to €34bn.

Butler notes Iberdrola’s share price performance over the last two years (up 53%) compared to Total (down 35%) and Shell (down 52%) confirms the market’s confidence in its strategy.

“In many ways, Iberdrola is the energy company Total and Shell say they want to become,” says Butler.

“An investor might well ask, why invest in Shell or Total to gain exposure to renewable energy when I could invest in NextEra, Ørsted or Iberdrola, given these firms are far more advanced in the transition?

“Investors may avoid the supermajors altogether unless they demonstrate serious progress towards their stated goals.”

Read the report: Supermajors’ Trajectory Towards Renewables Needs to Scale Up and Speed Up

About IEEFA: The Institute for Energy Economics and Financial Analysis (IEEFA) examines issues related to energy markets, trends, and policies. The Institute’s mission is to accelerate the transition to a diverse, sustainable, and profitable energy economy.