Why Utah’s Coal Port Investment in Oakland Is So Suspect 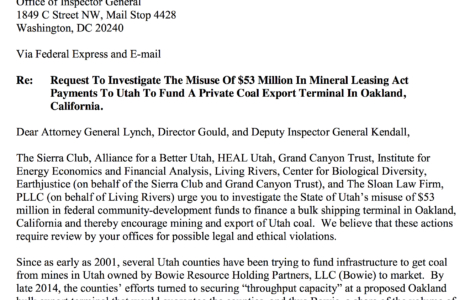 This week we signed onto a letter asking for a federal review of the odd transaction that diverts $53 million in Utah taxpayer dollars to a port expansion 730 miles away in California.

It’s a letter well worth expounding on. Here goes.

While environmentalists are opposed to the project for its climate-change and pollution effects, the project suffers from a fundamental dollars-and-cents problem. The people of Utah have far better use for $53 million than to give it to an out-of-state developer to build a port to ship coal to nonexistent markets.

It’s a pie-in-the sky scheme whose weakness is laid bare by a related story in Washington State. Arch Coal, now in bankruptcy, has just turned its interest in the Millennium Bulk Terminal project over to Lighthouse Resources in a transaction that is instructive. As part owner in the port project, Arch invested at least $57 million in Millennium. The company is now walking away from it, wholly transferring its ownership rights to Lighthouse Resources and receiving no cash in return. The only “benefit” that Arch gets is that Lighthouse has given Arch the right—someday, if and when the port is ever built, and if and when there is a market for Powder River Basin coal, and if and when Arch makes a successful bid overseas—to buy access to the terminals. It’s a deal that is typical of today’s coal market: One company unloads an asset with no monetary value in return for the right to buy back in, in the unlikely event that the assets will ever be needed. The careful reader will note here that we aren’t characterizing this transaction as a sale, which would imply something of value has changed hands.

Arch is not alone in having recently acknowledged the futility of U.S. coal-export dreams. Wood Mackenzie, the world’s leading coal-industry consultantk has made no bones about it (“U.S. Coal-Export Expansion Loses an Influential Cheerleader”) in its recent about-face on export markets. Here’s an excerpt from a recent WoodMac analysis:

“Successfully exporting low-cost coal from frontier regions, notably the PRB, to Asia requires producers to exploit one of two conditions. Either they must satisfy demand that Asian producers are unable to meet or they must outcompete Asian producers for their existing market. But Asian demand has weakened to the point that coal from frontier regions won’t be needed for many years. To sell coal in Asia, therefore, PRB producers must now out-compete Indonesian producers for existing market. And in the new coal price paradigm, they cannot.”

Why, then, is Utah going down this road?

The letter we co-signed, which is addressed not just to U.S. Attorney General Loretta Lynch but also to officials at the Office of Natural Resources Revenue and the Department of Interior, details a good deal of the shenanigans that went into Utah’s agreement to make the investment and then to pass legislation to support it. The story is replete with conflicts of interest, fiscal trickery and misuse of Utah’s state economic development programs. This grinding away of the mechanics of government was, of course, lubricated with campaign contributions to Utah’s legislature and governor.

Each individual elected representative that took related contributions did so during the time in which the matter was active before directors of the state’s Community Impact Fund, then as active legislation that was eventually passed and signed by Gov. Gary Herbert.

It’s perfectly legal in many cases, of course, for elected officials to take campaign money from individuals and interests with dealings from the state. It’s business as usual, until it isn’t. U.S. attorneys around the country over the years have invoked federal law to challenge whether the public is being honestly served by elected officials who take contributions and gifts in apparent exchange for formal state actions.

There are lots of other red flags surrounding this transaction (see “IEEFA Analysis: If Utah Commits to Proposed $53 Million Oakland Port Subsidy, It’s Buying a Pig in a Poke”), and ignoring them puts the public at risk if for no other reason than that $53 million is a lot of money to flush down the drain.

WE’RE ALSO CONCERNED ABOUT A LESS SENSATIONAL BUT EVEN MORE INSIDIOUS ANGLE TO THIS STORY, ONE THAT HASN’T BEEN QUITE AS PUBLICIZED. Under Utah law, counties that band together in mutual aid projects like this one purports to be are required to issue public debt to finance initiatives of any size. In Utah, the state treasurer is the referee on debt issuances. Yet the coal port transaction circumvents all such taxpayer protections normally triggered when the public issues debt in the name of taxpayers.

Other taxpayer protections ignored on this deal include the involvement of an independent investment advisor (elected officials usually make terrible financial advisors); state and private lawyer advice as to the legality of the use of the money, the legal structure to establish accountability, due diligence on the integrity of the parties involved, a market test of investors when the bond deal is offered and compliance with a host of banking and Securities and Exchange Commission rules on topics that include self-dealing and arbitrage. Credit rating agencies usually weigh in to rate the bond issuance, too. Of note on this point: None of the largest coal companies in the U.S. currently has a bond rating above junk (Junk ratings signal a high risk of default).

Nor have government accountants been involved to say whether the indebtedness falls within state debt limitations. Such limits are established in the State Constitution and are designed to prevent the government from borrowing too much. Granted, there are many ways around constitutional debt limits, and this transaction is a good example.

In the end, Utah taxpayers are being asked to lay out $53 million for a venture that is unlikely to offer any return on investment much less a recoup of principal and on which no one will not be held accountable. This is how public benefits become public liabilities and this is one way to raise taxes through the back door.

It’s also a way to dodge the scrutiny of the Securities and Exchange Commission and major credit agencies. The State of Utah, in its many other dealings, is being allowed to borrow money from the capital markets based upon a set of books that are plainly incomplete and do not fully disclose its risks.

There’s one other red flag around the Oakland port project expansion.  It is supported in part by federal funds from the U.S. Department of Transportation (USDOT), which means federal tax dollars are at risk, too, a fact that may yet draw the attention of the USDOT inspector general. A California state inquiry might not be that far-fetched either.

Projects like the Oakland port expansion are overseen by state and federal agencies for a reason. Decisions around such investment are very often influenced by politics, and this deal has more than a whiff of shadiness about it.

The core problem with Utah’s involvement—all politics and any chicanery aside—is that it is a bad deal. Investment in a coal port in this day and age is bad business (a certain coal CEO with holdings in Utah recently said he thought proponents of export deals were smoking opium).

When law is skirted, when taxpayer protections are ignored, when conflicts of interest go unaddressed and when campaign contributions spike the stew, those in positions of enforcement must step up and do their jobs.