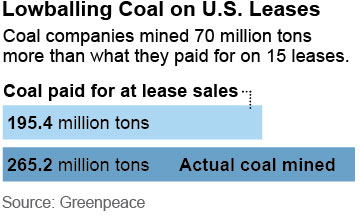 Official Washington was shocked—shocked!—to learn about the long lapse in proper oversight of federal coal holdings in the Powder River Basin of Montana and Wyoming when we published “The Great Giveaway” in 2012.

It turns out that coal-industry subsidies illuminated in that report are actually bigger than anyone knew.

Greenpeace adds detail to the full magnitude of the scandal in a new report, “Corporate Welfare for Coal” that includes in its findings details about how the federal government has, as a matter of policy, taken coal companies at their word when those companies tell regulators how much coal they’re leasing.

Among the findings by Greenpeace: the amount of coal identified in lease documents and the amount actually mined has been off by 35 percent (by way of example, the study details how coal companies mined 70 million tons more than what they paid for on 15 leases).

Coal companies, in a word, have underreported the value of the coal they take from federal lands.

SOME BACKSTORY IS HELPFUL IN APPRECIATING THE IMPORTANCE OF THE LATEST FINDINGS, STARTING WITH AN INSPECTOR GENERAL REVIEW published in 2013, which called for rethinking of the coal-lease program after 30 years of regulatory nonchalance:

Here’s a passage from that review that gets at the crux of the problem:

“Before a lease sale takes place, a mining company explores the site for the existence and extent of coal seams, including the energy content and quality of the coal. The mining company is required to furnish the information to BLM, which helps form the basis of BLM’s FMV (fair market value) determination. BLM, however, does not independently verify the data [emphasis added], relying instead on test results supplied by the mining company. Further, an independent laboratory does not furnish exploration data directly to BLM. This constitutes a risk in that BLM might not receive accurate data. Although “H-3486-1- Inspection and Enforcement” handbook recommends that BLM staff witness exploration activities, at least one State Office does not conduct such field inspections. Our evaluation did not uncover specific indicators of data misrepresentation; however, there are risks in current exploration-data management. Without verification, a company could provide incorrect data to BLM, resulting in BLM’s undervaluing the FMV and unknowingly accepting a low bid. Further, a company could use unverified data to justify a request for a reduced royalty rate.”

The government, in other words, accepted with no questions asked the size of coal-reserve calculations—even though the self-serving calculations came straight from the coal companies themselves.

Greenpeace, in its report, builds on that finding, and does so with careful methodology informed by obscure coal company reporting documents obtained through various Freedom of Information requests. While the Inspector General review reported no misrepresentations to the Bureau of Land Management (which oversees the federal lease program) in its findings, the Greenpeace report indicates that further research by the Inspector General would have produced not just evidence of unreported risk but a material loss of revenue to the federal government (not to mention the need for a review of whether the misrepresentations were willful).

WHEN WE PUBLISHED OUR STUDY FOUR YEARS AGO WE DID SO UNDER THE ASSUMPTION THAT THE COAL-RESERVE ESTIMATES IN QUESTION WERE ACCURATE.  We calculated the public’s loss from the BLM’s failure to set an accurate fair market value for those holdings at $7 billion.

The truth, as we now know, is that the number is $10 to $12 billion. Add to that the $30 billion in royalty-payment loopholes we described in “The Great Giveaway,” and the total loss to taxpayers on federal coal leases in the Powder River basin is well north of $40 billion. And it’s growing as those companies continue to do business as usual.

Our work—and Greenpeace’s work—has essentially filled a void that should have been covered by proper government oversight.  Despite the paucity of publicly available data and the institutional recalcitrance of the BLM we, and Greenpeace, hewed to methodology rooted in fact.  In our work, we mined audits of the program from the the 1970s and 1980s (a bygone era in which there were 25 formal General Accounting Office reviews, a multi-volume congressional commission report, and a number of useful nonprofit and coal industry reports). We studied BLM practices from the time and investigated whether appropriate updates in program management or relevant policy had occurred.

Our conclusions were inescapable. Taxpayers were being ripped off.

WHERE TO GO FROM HERE? A FULLY TRANSPARENT PARTNERSHIP BETWEEN THE FEDERAL GOVERNMENT AND U.S. COAL-MINING COMPANIES is the place to start.

Here’s how to get there:

The coal industry is predictably dismissive of such advice and the research behind it. Coal-industry executives insist the only way forward is to declare bankruptcy and then stay a hopeless course to mine more coal.

Results and reality speak louder than rhetoric, however. These are the very same executives who have presided over an industry that—even as it has received massive handouts—has lost more than 90 percent of its value over the past five years, serving as a wealth-destruction machine of epic and historic breadth.

Change is in the wind. A recent review request by Senators Maria Cantwell and Dick Durbin on a separate coal-industry self-regulation scheme related to mine reclamation suggests that official Washington may have had enough. The seeds of the next cycle of coal use, built on a pubic-private partnership rooted in transparency, are being sown regardless of coal industry opposition.