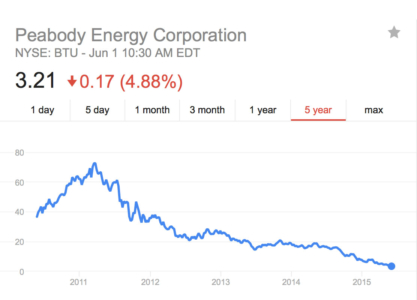 We distributed a briefing note this week that delves into some of the many pressing difficulties confronting U.S. coal producers.

In the note (“Struggling U.S. Coal Companies Face Debt Hurdles, Complications From Reclamation and Pension Obligations, Pressure from Hedge Funds”) we talk about how the cumulative impacts of the industry’s many mounting liabilities—reclamation costs, pension obligations and debt service—are growing more complicated and burdensome.

One notable symptom of coal’s malaise is the recent sharp upturn in layoffs. Another is how the stock of prominent coal companies is performing. Peabody Energy this morning fell recently to a record low and Alpha Natural Resources, which is trading lately at 50 cents a share, is facing delisting from the New York Stock Exchange for failing to maintain a share price of $1.

Imperial Capital, in a recent research note on Alpha, sees fundamental erosion in corporate bond values in the coal sector reminiscent of our commentary a few weeks back (“Another Year Older and Deeper in Debt”). Imperial is saying now that Alpha’s liquidity seems inadequate, and Imperial is posing a question that goes more or less like this: “Do we really think it’s okay for this company (or any company, for that matter) to adopt a strategy of spending every last nickel of its cash just to keep the lights on when there is no new revenue in sight?”

Imperial, in so many words, is counseling Alpha to go bankrupt now as a way to preserve any remaining bond value.

Credit insurance has become another point of weakness for coal companies. For Arch Coal, for instance, credit-default protection is recently trading 300 percent higher than it was during the summer of 2014 as premiums skyrocket.

ARCH IS A GOOD EXAMPLE, TOO, OF A PROBLEM ENDEMIC IN AN INDUSTRY IN WHICH EXECUTIVES SEEM RELUCTANT to drop old and outdated schemes in favor of more practical strategies.

Arch has signaled it will move forward with capital expenditures for the undeveloped Otter Creek coal mine in Montana and with construction of West Coast ports to export what it takes from Otter Creek. It is planning to do so even though coal prices do not support such a project and Arch appears to lack the resources to develop it.

Imperial’s note on Alpha Natural Resources makes a point to mention the recent announcement of reclamation bond reviews by West Virginia officials. That event was followed quickly by news that federal regulators are now investigating more broadly whether U.S. coal companies are truly in any position to make good on the “self-bonding” by which they promise to pay for cleanup costs.

A bankruptcy would be required for Alpha to continue operations and to get debtor-in-possession loans that would allow the company to meet its reclamation responsibilities.

PENSION OBLIGATIONS AND HEDGE FUND ACTIVITIES ARE ALSO WEIGHING ON THE INDUSTRY. Pension-plan funding levels have deteriorated as company pension investment strategies have moved from equity to debt (one hopes it’s not coal debt). Some coal companies have pension funding levels in the 80 percent range, which is decent, but coal-company pension funds—as with every other aspect of the industry—are under stress.

Hedge funds, in the meantime, are leaving the coal sector. The last go-round for them appears to be a kind of bottom feeding meant to exploit tiny movements in coal equities that have become penny stocks. The industry’s market presence has diminished remarkably— recall Peabody’s expulsion last year from the S&P 500 Index and Arch’s recent NYSE delisting warning.

Combined, exclusion from broad indexes and abandonment by hedge funds serves as an inexorable, silent divestment by the markets.