The Plant Doesn’t Run Like Its Creators said it Would, and Its Electricity Is Overpriced 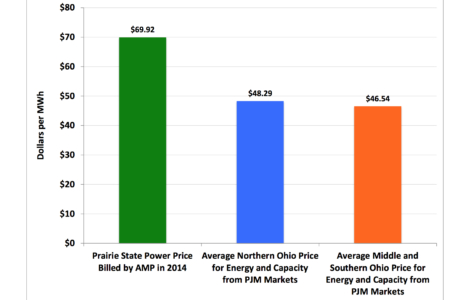 Prairie State Energy Campus failed in 2014 — as it failed in 2012 and 2013 — to provide the reliable, low-cost electricity that Peabody Energy, American Municipal Power, and its other promoters promised when they persuaded more than 200 communities around the Midwest to sign long-term contracts to buy power from the plant (we’ve documented these failures in detail in a recent research memo posted here).

The Prairie State promise went like this: the plant would operate at 85 percent capacity, providing a reliable source of electricity to its many member towns and cities, and it would provide electricity at competitive prices.

The ugly and undeniable truth that has emerged over time, however, is that Prairie State Energy Campus has done neither. Its failure can be documented year by year in two ways: by its capacity-factor performance and by its disastrous record in living up to its promise of providing low-cost electricity.

Because the cost of Prairie State electricity is so high, many of the municipal power agencies that issued the $5 billion in bonds for the plant have been under pressure from the communities to make the price more palatable. One way to do this is by refinancing the debt and pushing the payment of the principal into the future, and some of the major municipal power agencies involved did so in late 2014 and early 2015.

These refinancings, combined with better plant operating performance in early 2015, pushed the price of Prairie State electricity down some in January and February—by about 15 percent across American Municipal Power communities, for instance, from the same time period in 2014. However, the market price of power has gone down too, which means Prairie State power is still relatively expensive.

Here’s the main two-part breakdown of the plant’s performance from mid-2012, when it opened, through 2014:

Even if Prairie State were to begin to operate finally as well as its owners have been promising since at least 2007, it will remain a lingering albatross around the necks of participating communities.

Towns and cities ensnared by the project will never get back the tens of millions of dollars they have paid since 2012 for the high cost of Prairie State electricity. And for decades to come, should they choose to continue their current relationship with Prairie State Energy Campus, they will continue to pay higher prices than necessary. This would mean increasingly uncompetitive electricity rates; deferred investment in maintenance and new projects; layoffs; and pressure to use other taxpayer resources to finance this mistake.

Over the rest of this week, we’ll be posting further commentaries and research that explore some of the rock-bottom problems with the plant and that detail how the municipal economic damage has reaches far and wide. We’ll note also that any impetus for finding the light at the end of this tunnel will most likely come from someplace other than Prairie State Energy Campus itself.

Tomorrow: The Truth About the Coal Burned by Prairie State Energy Campus

(Part 3): A Crippling Burden to Its Many Towns and Cities