Santos' massive 300% profit windfall: Eastern Australia is swimming in subsidised gas and we’re giving it away

Santos bought large volumes of gas out of the domestic market in the first half of 2022, forcing domestic prices above export prices in the last six months.

Santos is price gouging the domestic gas consumer and hence is forcing up domestic electricity prices to unaffordable levels.

The east coast gas market has all the features of a cartel-like behaviour, including price-fixing and anti-competitive behaviour.

Santos today is reporting underlying profit for the first half of 2022 of US$1,267 million, a massive increase of 300%.

Santos bought large volumes of gas out of the domestic market in the first half of 2022.

They have broken their approval conditions and IEEFA calls on the government to cancel their export licence.

IEEFA calls on the government to cancel their export licence

Domestic prices have at times been above export prices in the last six months.

Santos is price gouging the domestic gas consumer and hence is forcing up domestic electricity prices to unaffordable levels.

If the government doesn’t take firm action to reign in this unlawful conduct, Australia can look forward to economic hardship.

Australia has a different business model from other leading gas exporting nations such as Qatar. Here, we give our heavily subsidised gas away for free.

Taxes and royalties are barely paid, and domestic consumers are both fleeced and starved of supply by a handful of gas export companies who control the market and the domestic price.

The same companies have fed us a mantra crying gas shortages for over a decade, echoed by the federal government intent on kowtowing to the industry.

The latest in a series of Gas Inquiry reports by the Australian Competition and Consumer Commission (ACCC) has confirmed there's no gas shortage in Australia. Instead, it found Eastern Australia is swimming in gas, with existing production more than enough to fulfil demand in the domestic market and supply all export contracts with 167 petajoules (PJ) to spare – equivalent to 29% of the domestic market. 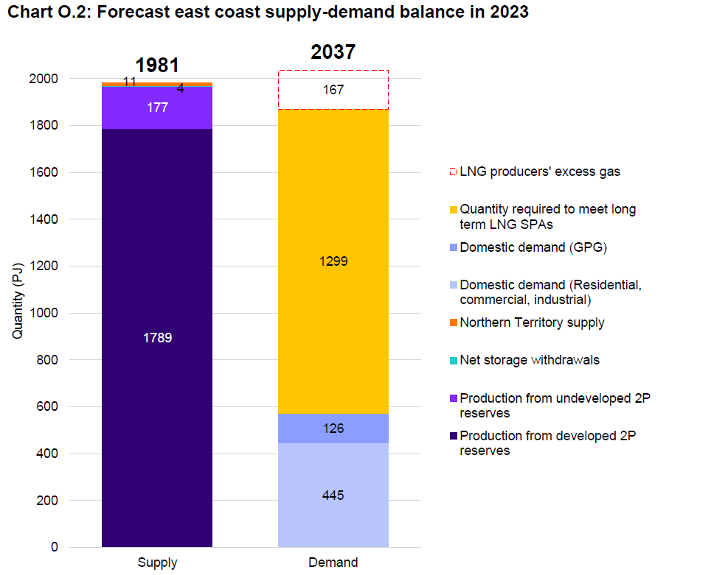 Despite evidence of such large reserves, the ACCC has described this embarrassment of riches as a ‘gas shortfall’. It assumes, probably fairly, that gas companies will export all of the excess gas. The numbers mean that Australia’s east coast could impose a domestic gas reservation policy for more than the local market and still satisfy the long-term export contracts.

Santos’ Gladstone LNG approval document (2009) stated that its export Liquefied Natural Gas (LNG) projects would not affect the domestic market. Prices then were a stable $3-4/gigajoules (GJ). A couple of weeks ago, spot prices were $55/GJ in Sydney.

The ACCC report (page 22) also shows the east coast LNG producers are drawing gas out of the domestic market in 2022 and 2023 against their approval assurances. 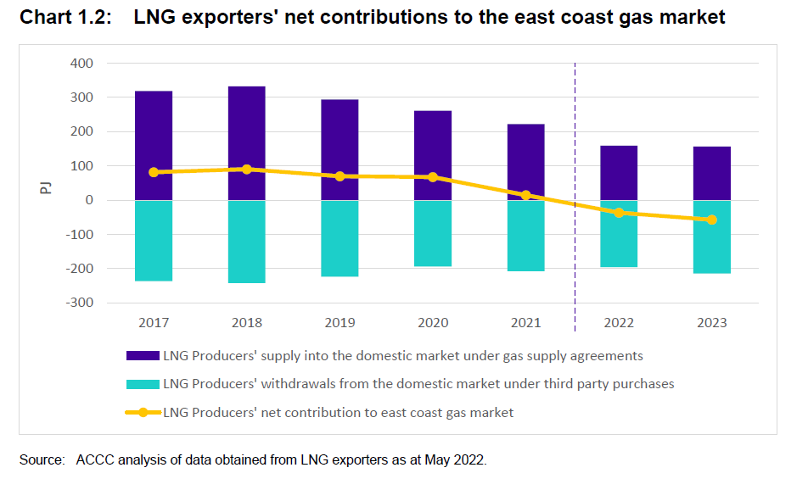 The report went on to suggest the east coast gas market has all the features of a cartel-like behaviour, including price-fixing and anti-competitive behaviour.

Such behaviour appears to have been confirmed last week when after months of high gas prices (reaching $55/GJ in Sydney), they suddenly dropped to $10-14/GJ following the report's release.

The ACCC report (page 15) details key features of the east coast gas market. It describes a cartel but then does not call it one. The unwillingness of the ACCC to prosecute has to be questioned.

Jemena, the gas pipeline company, is also up for an audit. Chevron got pinged in 2017 for tax avoidance and settled, and the ATO is currently deep in conversations over a settlement with ExxonMobil.

The linkage between gas prices and high electricity prices is plain as day. Gas sets the wholesale price of electricity when prices are high as it is the biggest cost source of generation.

Recently, electricity consumers suffered an 18% increase in bills. With high wholesale prices this year, driven by excessive gas prices, it is likely that price increases will be larger in 11 months.

We are in a rolling energy crisis precipitated by high gas prices.

Gas companies like Santos have been enjoying massive windfall profits this last six months, and those profits have been pocketed. Meanwhile, gas prices globally have increased, with those costs passed onto domestic consumers.

This practice was recently heavily criticised by the Secretary General of the UN, Antonio Guterres when he said it is “immoral” for gas companies to be making record profits from the current energy crisis. He urged governments to tax these and use it for supporting the most vulnerable people.

Unless Australia controls the east coast cartel, the gas and electricity price crisis will not dissipate. And the government, which is too close to the gas industry, will continue subsidising new gas fields.

The International Energy Agency says there can be no new gas fields globally if we are to achieve net zero by 2050.

More production in Australia will not solve the problem as the cartel will just export more and/or supply less to the domestic market. It is what illegal cartels do.

We do not have a supply crisis. It is a gas price crisis.

Until eastern Australian gas prices are controlled, we will keep facing a rolling gas and electricity price crisis that will keep hurting the economy.

And we will continue to give away our gas for free.