Ruling Is a Giveaway to FirstEnergy and AEP, and a Betrayal of Ratepayers 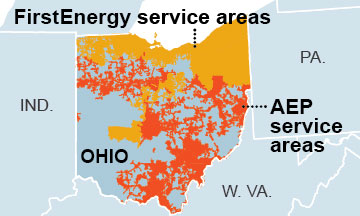 Yesterday’s ruling by the Public Utilities Commission of Ohio to allow for ratepayer subsidies of aging coal-fired power plants operated by First Energy and AEP proves that these plants aren’t competitive.  Indeed, the ruling serves as a reminder that the only way the power plants can survive is through massive ratepayer bailouts.

Yet the case is not over, since the Federal Energy Regulatory Commission has yet to rule on it and the PUCO decision will probably be appealed to the Ohio Supreme Court.

IEEFA’s analysis of the FirstEnergy plan in particular has shown that customers are likely to pay at least $4 billion extra for electricity from FirstEnergy’s aging coal plants, as well as the frequently troubled Davis Besse nuclear plant, over the eight-year life of the deal.

Here’s why the ruling is a bad one:

In sum, customers—if PUCO’s ruling stands—will be paying to subsidize uneconomic electricity plants so FirstEnergy and AEP can profit.

In Ohio, AEP and FirstEnergy Adopt an Audacious Strategy That Could Cost Ratepayers Dearly