In Questionable Coal-Expansion Strategy, One Company Appears Especially Out of Sync

Kentucky-based Bowie Resource Partners has gone on a coal-reserves spending spree, showing an ambition weirdly out of step with the current investment climate for U.S. coal.

It began in 2013, when the company bought out Arch Coal’s Utah holdings—the Skyline, Dugout, and Sufco mining properties—for $435 million. The company used Trafigura, a Dutch commodity-trading house, and its Trafigura’s private equity vehicle Galena Associates to finance the transaction. Bowie today owes $470 million on that deal, according to its June 2015 preliminary filing with the Securities and Exchange Commission.

This past November, Bowie announced another expansion deal, to buy three mines from Peabody Energy—two in New Mexico and one in Colorado—for $358 million in cash (and $105 million in liabilities). The company said an unidentified private equity firm would support the Peabody transaction—and that the mysterious new investor would put $313 million into two tranches to take out Galena’s interest in the Utah mines. 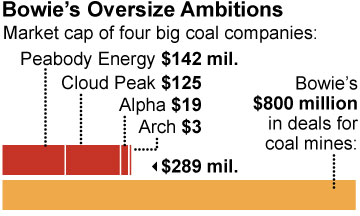 It’s hard to get a full picture of what the company is up to. But what can be gleaned from various filings, once you do the math, is that Bowie’s expansion is occurring on the back of more than $800 million in private equity money. Today, $800 million is more than the market capitalization of the four biggest U.S. coal producers—Peabody Energy, Alpha Natural Resources, Cloud Peak Energy and Arch Coal—combined.

THE COAL INDUSTRY IS PULLING BACK ALL ACROSS THE U.S., and the availability of new capital spending for expansion is in question. Cloud Peak Energy has recently put its export aspirations on hold. The developers of the proposed Tongue River Rail project in Montana have announced a hiatus on Otter Creek mining plans, a move that puts another export deal on the shelf. Last week, executives at Westshore Terminals in Vancouver announced that the terminals had moved less coal than expected this year and that the outlook for 2016 and 2017 is weak. The owners of Signal Peak mine in Montana have entered into contraction negotiations to ship less coal through Westshore.

A studied retreat by Trafigura and Galena from the Utah mines would be consistent with testimony from Seth Schwartz, Energy Ventures Associates, a well-regarded coal consultant, to the Idaho Public Utility Commission last year. Schwartz said the market for Utah coal is in pronounced decline. Here’s a snippet of his testimony:

“The supply of Utah coal is uncertain after 2019. Based upon the current assigned reserves, the Skyline and Dugout Canyon mines would likely be closed in this time period. While Bowie has announced plans to lease additional coal reserves and maintain production, these plans could change based upon market conditions and the ability to obtain these coal leases. It is possible that Utah coal supply could be significantly smaller.”

While Schwartz said he thinks Bowie may be able to eke out a few deals to supply coal-fired electricity plants, even its seemingly solid contracts are worrisome when viewed up close. Bob Murray, CEO of Murray Energy, which has holdings in Utah, has declared the region all but dead.

BOWIE ALSO HAS AN OUTSTANDING PRELIMINARY INITIAL PUBLIC OFFERING, AND IT LOOKS LIKE it would use some or all of the capital it might raise from that IPO to take out Trafigura’s-Galena’s interest and fund still other acquisitions.

The bottom line, to us, is that Bowie is losing Trafigura and Galena as deep-pocket investors. Trafigura will apparently still be involved in any export arrangements, although projections made by both the company and the port of Stockton (the two are partners on an export pact) see coal exports declining this year and next. Trafigura is having trouble elsewhere, too, specifically in China. Two of its employees were detained by the authorities for questioning in a fraud investigation there last year, and the all-important China coal import market is drying up. Bowie in its SEC filing still somehow cites China as a major potential market.

Bowie is banking, too, on a controversial plan to ship coal through a new port facility being developed in Oakland. We provided testimony to the Oakland City Council in September noting that the private financial commitments for this project are past deadline. We noted also that the State of Utah has yet to grant its final signoff for millions of dollars in subsidies for that project.

Bowie’s strategy, by some accounts, is a potentially successful expansion in an otherwise shrinking industry.