Our Op-Ed in the New York Times: ‘After Bankruptcies, Coal’s Dirty Legacy Lives On’ 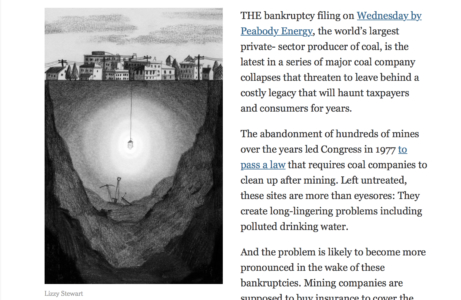 The bankruptcy filing on Wednesday by Peabody Energy, the world’s largest private- sector producer of coal, is the latest in a series of major coal company collapses that threaten to leave behind a costly legacy that will haunt taxpayers and consumers for years.

The abandonment of hundreds of mines over the years led Congress in 1977 to pass a law that requires coal companies to clean up after mining. Left untreated, these sites are more than eyesores: They create long-lingering problems including polluted drinking water.

And the problem is likely to become more pronounced in the wake of these bankruptcies. Mining companies are supposed to buy insurance to cover the cost of cleanups. But Congress has allowed some of the more financially secure coal producers to “self-bond,” promising to pay for cleanups themselves.

This arrangement made sense when the industry was healthy and had deeper pockets. But now taxpayers are at risk of having to foot the bill as mining companies either file for bankruptcy or redirect their dwindling dollars elsewhere to stay afloat — including paying obscenely generous compensation packages to executives. A recent congressional estimate puts outstanding cleanup liabilities nationally at $3.6 billion.

Perhaps the most glaring instance of self-bonding gone bad is Peabody Energy. Leading up to its bankruptcy, Peabody had been frantically trying to preserve its $1.47 billion in self-bonding agreements in states where they had been called into question by regulators.

Two other major coal companies, Alpha Natural Resources and Arch Coal, recently filed for bankruptcy, leaving hundreds of millions in reclamation guarantees in limbo. A deal between Arch Coal and regulators in Wyoming suggests taxpayers will get stuck with the bulk of the cleanup costs. The company agreed to earmark at most $75 million to cover self-bonded reclamation liabilities of more than $450 million.

THIS POLICY OF SELF-BONDING HAS BEEN A FAILURE. CONGRESS SHOULD END IT ALTOGETHER and require all companies to purchase insurance to cover their reclamation costs.

At the same time, many of the communities that depend on the coal industry not only for jobs but also for tax revenue are facing real trouble. In Campbell County in Wyoming, public officials are worried that Arch and Alpha will not make good on $50 million in local taxes due in May. In western New York State, NRG Energy’s closing of its coal-burning Huntley Station power plant in Tonawanda means layoffs, reduced tax revenue and an abandoned site. Community, environmental groups and the area labor federation forged a coalition to address the problems, and the recently passed state budget provides financial relief to schools and local governments that will lose tax revenues. This type of cooperation turns a community facing a loss into one with a plan to build its future. It must be done nationwide with federal support for workers, businesses and communities.

The recent bankruptcies of the nation’s leading coal producers are the latest benchmark in the steady decline of the coal industry. The industry’s problems are also hurting consumers, who are being hit by unnecessarily high electric rates approved by regulators to keep open coal-fired power plants that are no longer competitive with cheaper natural gas and renewables.

In Ohio, for instance, the state’s Public Utilities Commission has approved a plan from Akron-based FirstEnergy to let the company keep three of its aging coal plants on ratepayer life support while stockholders profit. Our calculations show that this scheme would cost FirstEnergy customers $4 billion in excess of the anticipated market price of electricity through 2024.

Similar strategies are at play in Georgia Power’s insistence on saddling customers with the costs of keeping Plant Hammond in northwest Georgia open, and in the Orlando Utilities Commission’s plan to continue to put good money after bad at the C.D. McIntosh Jr. power plant in Central Florida.

At the same time, newer coal-fired plants built on the promise of cheaper electricity aren’t delivering on those promises, according to our research. Those ill-advised and ill-conceived projects include Prairie State Energy Campus in southern Illinois, the Edwardsport power plant in Indiana and Southern Company’s Kemper County plant in Mississippi.

In each of these instances, and in many others across the country, electricity companies blinded by history and tradition are sticking with coal and neglecting more sensible and affordable strategies that include natural gas, renewable energy and energy efficiency.

The United States is not nearly as dependent on coal-fired electricity as it was a generation ago, and its future is no longer tied to coal. But we still need prudent public policies that ensure coal companies pay their cleanup costs, that prevent utilities from rejiggering their rate structures to keep decrepit coal-fired plants alive at ratepayer expense, and that encourage new forms of investment in communities left high and dry by coal’s demise.

Peabody’s Bankruptcy Will Shed Light Where Transparency Has Been Lacking

Is Bowie Resource Partners the Next Bankruptcy?

How to Invest in Struggling Coal-Industry Communities? Let Us Count the Ways

Ruling Is a Giveaway to FirstEnergy and AEP, and a Betrayal of Ratepayers