PREPA’s history with the oil industry is characterized significantly by a long-standing scheme to sell low-quality oil at high-quality prices.

It is clear that PREPA’s over-dependence on expensive oil has been a major factor in PREPA’s march to physical and financial ruin over the past decade. The need to transition away from oil has been acknowledged by PREPA and the Financial Oversight and Management Board.

At the same time, PREPA has been plagued by weak management and political interference that have led to poor budgeting practices and numerous contracting irregularities.

The single largest expense in the operating budget of the Puerto Rico Electric Power Authority (PREPA) is its purchase of oil to fuel the agency’s power generation plants.

The oil companies and traders who received this revenue effectively controlled PREPA's operations for decades—and in fact still do so—benefiting from corruption and management negligence to a degree that has not been well understood outside Puerto Rico.

At the heart of the scandal reviewed in this paper was a fraudulent scheme by which PREPA bought low -quality oil at high-quality prices for perhaps as long as 30 years. A Puerto Rico Senate investigation has recommended that the fraud in question be prosecuted. Consumers are pursuing a class action suit for damages, and this report recommends that bondholders also pursue claims. 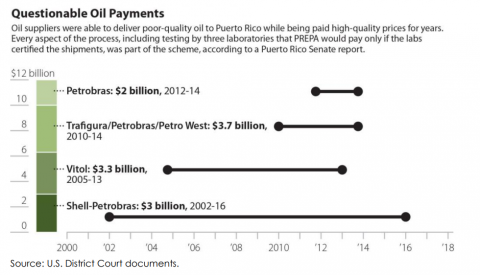 PREPA is playing a pivotal role in Puerto Rico’s rebuilding effort after the island was devastated by hurricanes in the fall of 2017, and the fate of Puerto Rico hinges on the fate of PREPA. A law enacted in June 2018 to privatize PREPA via a series of asset sales and concessions must be understood in the context of the oil industry’s fight to maintain its political and economic control over Puerto Rico’s electricity system.

The Institute for Energy Economics and Financial Analysis has examined the history of the contractual relationship between PREPA and the oil companies with which it does business; lessons learned from the procurement and budget process in question; and how efforts to reform the process so far have failed. Although the weaknesses in the agency’s procurement and contracting processes are clear, they are not addressed in the recently-enacted privatization law ostensibly designed to transform PREPA.

Instead, the new law and other contracting reforms spurred by a 2017 executive order, provide a fresh opening for outside fossil fuel interests to continue to effectively control PREPA. Despite the fact that PREPA’s current fiscal plan, recently certified by the Financial Oversight and Management Board for Puerto Rico (FOMB), sees PREPA’s overreliance on fossil fuels as financially unsustainable, operational reforms proposed by both the Legislature and the governor only perpetuate unaccountable contracting and budgeting processes. These processes are tethered to global oil interests abetted by politicians in Washington that have consistently acted against the interests of Puerto Rico.

The commonwealth of Puerto Rico cannot advance, much less thrive, without an affordable and reliable electricity system. PREPA’s history of mismanagement and corruption—the most glaring examples of which can be seen in the agency’s Fuel Office operations and in the oilpurchasing scheme described in this report—remains a major impediment to its success and to its ability to maintain access to capital markets.

PREPA currently owes over $8 billion to bondholders who may have grounds to make claims for damages caused by PREPA’s mismanagement and corruption in the oil-procurement practices described here.

If Puerto Rico does move forward in building more sources of renewable energy—as the FOMB, PREPA and the governor have committed to do in the budget and in the PREPA fiscal plan—an unintended but positive consequence may be a loosening of the corrupt grip that the fossil fuel sector has on PREPA.