IEEFA West Virginia: If Power Plant Is So Valuable, Why Is FirstEnergy Seeking to Transfer All the Risk to Ratepayers?

If its Pleasants Power Station is as valuable as FirstEnergy Corp. has told the West Virginia Public Service Commission that it is, why is the company so determined to push the ownership risks of it onto ratepayers?

That question was at the heart of much of the testimony presented to the commission this past Friday on what essentially is a proposed ratepayer bailout for the Pleasants plant. 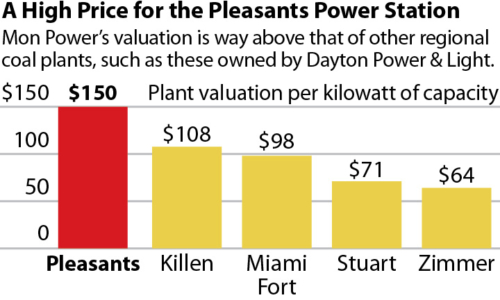 FirstEnergy seeks to transfer ownership of the coal-fired Pleasants plant (located in West Virginia along the Ohio River near Parkersburg) from its deregulated power generation subsidiary Allegheny Energy Supply (AE Supply) to its utility subsidiaries in West Virginia, Monongahela Power Company and The Potomac Edison Company. Under its current ownership structure, Pleasants competes to sell its electricity in the regional power market, and AE Supply makes a profit (or loss) based on whether the revenues obtained from selling the plant’s electricity cover the costs of owning and operating the plant.

If the plant were transferred, as FirstEnergy hopes it will be, to Mon Power and Potomac Edison, customers of those utilities would cover all of the costs of operating and owning the plant, which would include guaranteed profits to the utilities (and FirstEnergy) even if the plant loses money. The plant would still sell its electricity in the regional power market and the revenues would be credited back to electricity customers. But—crucially—the risk that the revenues from market sales could prove insufficient to cover the costs of the plant would be borne by Mon Power and Potomac Edison customers alone, who would see their rates go up to cover the difference.

In its petition to the West Virginia commission, FirstEnergy argued that electricity market prices are likely to rise, such that owning Pleasants would pencil out to a net benefit to ratepayers of $636 million over the next 15 years.

Many parties’ witnesses asked pointedly on Friday why—if Pleasants really is going to be generating $636 million over the next decade and a half—is FirstEnergy so eager to sell it to its regulated subsidiaries?

The likely answer is that the plant no longer earns as much as FirstEnergy would like it to, due to the ongoing environment of low wholesale power prices—low prices that are driven by cheap natural gas, relatively flat power demand, and increasing penetration of renewable energy and the growing uptake of energy efficiency.

Multiple witnesses testified on Friday that, under assumptions more reasonable than the ones FirstEnergy is making about future energy market prices and the plant’s future operating costs, purchasing Pleasants will be a net loss to ratepayers.

And, as pointed out by David Schlissel (testifying on behalf of the West Virginia Citizen Action Group and West Virginia Solar United Neighborhoods), the price that AE Supply (which, again is a FirstEnergy subsidiary) is asking for the Pleasants plant is much higher than the value of other merchant coal plants—including others owned by FirstEnergy—in the same region.

THE PAST YEAR HAS SEEN MAJOR WRITE-OFFS OF COAL PLANT VALUATIONS BY FIRSTENERGY, by American Electric Power and by Dayton Power & Light—all big players in the regional electricity-generation market—precisely because those companies have accepted the reality that their plants simply are not worth as much as they used to be.

All forecasts are a bet on the future. AE Supply and its parent FirstEnergy, by seeking to transfer Pleasants ownership to Mon Power, are betting—cynically, at that—that Mon Power and Potomac Edison’s rosy forecasts for higher energy market prices will not actually pan out. When that happens, ratepayers will be left holding the bag.

This is not the first time FirstEnergy has used this strategy in West Virginia.  Its transfer of the ownership of the Harrison Plant from its unregulated subsidiary to its regulated affiliates in 2012 has cost customers at least $160 million more than they what they would have otherwise paid for electricity.

The West Virginia Public Service Commission would be serving its public by rejecting this deal.

IEEFA Ohio: FirstEnergy’s Bailout Plan Is Paying Off (for FirstEnergy)