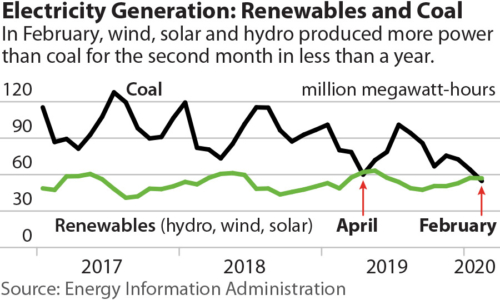 The unthinkable occurred in the U.S. last month: In the dead of winter, renewable energy (utility-scale solar, wind and hydropower) generated more electricity than did coal plants.

This has never happened before.

The data comes with a few caveats. EIA notes that the numbers are not final (there is a two-month lag until numbers are confirmed in the Administration’s Electric Power Monthly) and that the new web-based resource is still undergoing beta testing. Still, the likelihood that renewable generation outperformed coal during the winter, historically a high-demand season for coal-fired generators, is a clear sign of the rapid transition that is reshaping the U.S. electricity sector.

The first time renewables outproduced coal, last April, was a landmark month (see: April is shaping up to be momentous in transition from coal to renewables). February 2020’s results are, if anything, even more important given the time of the year and some of the underlying data. As we noted at the time, the April 2019 results were somewhat influenced by the industry practice of taking coal plants offline during lower-demand seasons (spring and fall) to perform maintenance and upgrades in preparation for higher energy demand during the summer and winter months.

Even more interesting is comparing the daily figures of coal generation last April with this February’s results. February logged 11 days when coal-fired generation totaled less than 1.8 million megawatt-hours (MWh); last April witnessed only five such days. At the other extreme, April 2019 marked 13 days when coal-fired generation topped 2 million MWh; February 2020  recorded only eight. Most tellingly, for the month as a whole, coal generated an average of 1.98 million MWh daily last April; while this February the daily average was just 1.88 million MWh. All of this EIA data can be found here.

The pace of the transition has also quickened as can be seen by comparing coal-fired power generation from February 2019 with February 2020. The numbers are just as startling: In February 2019, coal’s daily generation averaged 2.75 million MWh—870,000 MWh more than in February of this year. Generation, by source, from the two months can be seen in the charts below. 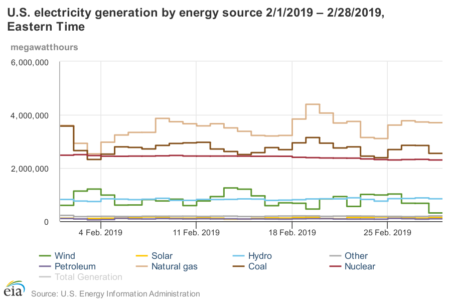 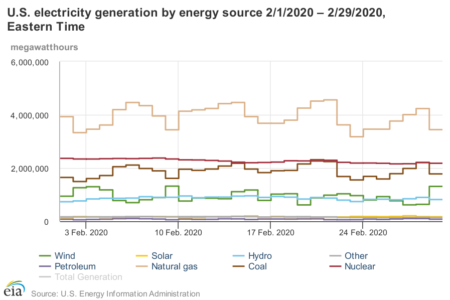 Two takeaways are clear from the data. First, low gas prices have significantly boosted gas-fired generation. After topping 4 million MWh a day only twice in February 2019, gas generation hit that mark 13 times in 2020. Second, coal-fired output has fallen below nuclear generation. Overall, the EIA numbers show that gas accounted for roughly two-thirds of the lost market share for coal, while renewables picked up the remaining third.

The competition will only grow stronger this year. Current Henry Hub spot gas prices are in the $1.75 per million Btu range, an exceedingly low level, and one not seen since early 2016. EIA projections have prices increasing, but not by much. EIA’s latest short-term energy outlook estimates gas prices will average $2.29 per thousand cubic feet this year and $2.62/mcf in 2021 (one thousand cubic feet equals 1.036 mmBtu). At those prices, it will be extremely difficult for coal to regain any market share from gas.

Similarly, increasingly low-cost renewable resources will continue to eat into coal’s share of the electricity market. According to the American Wind Energy Association (AWEA), 9,134 megawatts of new wind capacity came online in 2019, more than half of which (5,746MW) entered commercial service in the fourth quarter. In other words, new wind capacity is just now beginning to take market share away from coal. There is much more wind to come, with AWEA estimating that 44 gigawatts of new capacity is in the development pipeline.

A similar, rapid buildout is under way on the solar side as well. Total solar capacity in the U.S. is now more than 70GW with an additional 45GW in the development pipeline, according to the Solar Energy Industries Association.

These no-fuel-cost resources pose a looming challenge to the nation’s remaining coal-fired generation capacity in a race that coal is clearly losing fast.

IEEFA U.S.: April is shaping up to be momentous in transition from coal to renewables

IEEFA update: Renewable generation in U.S. is set to surpass coal in 2021