IEEFA U.S.: Powder River Basin mines may reopen, but the bad news is far from over 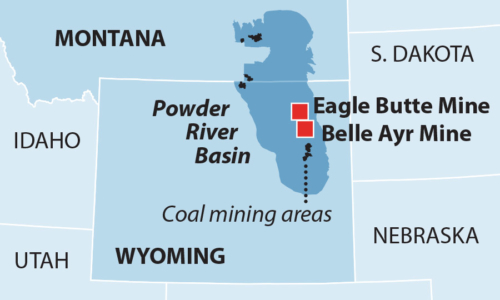 The immediate future of two large coal mines in the Powder River Basin (PRB) may have become clearer last week, with a winning bid from Contura Energy in the bankruptcy auction of Blackjewel. The company has said it intends to reopen the mines, but if and when Contura will actually be able to achieve that goal—and for how long—remains an open question. Final approval of the sale rests on a resolution with the federal government over millions of dollars in royalties that have never been paid, among other issues.

Yet even as this saga continues to play out, the longer-term outlook for the PRB is worsening: according to the latest forecasts, coal production from the basin is likely to fall another 100 million tons by 2023, to 231 million tons.

In the chaotic financial collapse of Blackjewel at the beginning of July, the Belle Ayr and Eagle Butte mines in Wyoming were suddenly closed, along with several Eastern coal mines.

Some 1,100 miners were thrown out of work without notice

As a result, some 1,100 miners were thrown out of work without notice. The two Powder River Basin mines had produced over 35 million tons of coal in 2018, more than 10 percent of the PRB’s total, and their closure imperiled the energy supply for a number of large coal-fired power plants across the country.

This month, after Blackjewel failed to raise the money needed to reopen its mines, the company’s assets were auctioned off. Contura Energy bid on the two PRB mines as well as the Pax mine in West Virginia, which produces metallurgical coal.

This was no white-knight rescue. Less than two years ago, it was Contura that had essentially paid Blackjewel to take the mines, and the hundreds of millions of dollars in cleanup obligations that went with them, off its hands. But the deal, troubled from the start, was never fully realized, and Contura was left holding the mining permits—and responsibility for all the cleanup costs. It was these looming costs that brought Contura back to the table.

Now, just to regain control of the mines, the company will spend $34 million as the auction winner, and is promising to pay tens of millions more in back taxes and royalties, which would have a major impact on the company’s finances for years to come. According to a company lawyer, “We would be providing effectively 20 percent of our free cash flow to the federal government and various government entities…on top of the ongoing royalties and taxes that would all be paid in full going forward.”

DESPITE CONTURA’S BID, THE ECONOMIC VIABILITY OF RUNNING THE BELLE AYR AND EAGLE BUTTE MINES IS DOUBTFUL. Contura, as the former owner of the mines, probably has the best understanding of how to operate them. Yet the company apparently could not figure out how to do that very profitably, or it would not have handed them to Blackjewel for $50 million in “deferred compensation” (S&P Global Market Intelligence, “Contura sells Powder River Basin Mines to focus on Appalachian assets”). Blackjewel was clearly unable to do any better, racking up hundreds of millions in unpaid debts, taxes and royalties before being sold off in pieces.

Indeed, if not for trying to mitigate the huge costs of cleaning up the mines, Contura might not have bid at all.

So it should be no surprise that some reports suggest that Contura might be planning to run the mines for only a year or less, selling the easiest coal it has while focusing on cutting its cleanup costs as much as possible. Coming on the heels of Blackjewel’s sudden demise, the possibility that Contura may not be around very long should get local and state officials to begin some serious planning for the future, rather than assume all will be back to normal with the mines’ reopening.

Most of the coal mined in the U.S. is sold to utilities to generate electricity. Back in 2008, coal was the fuel for half of all the power produced nationally. But the falling cost of renewables has led to the construction of vast wind farms across the Great Plains, and the booming installation of solar panels across regions. This, combined with the inexpensive production of gas from hydraulic fracturing, has led to a transformation of the power sector, where coal is rapidly being pushed out by cheaper, cleaner competitors—a trend that appears to be accelerating.

Utilities are “not only sticking to plans to retire coal-fired power plants,” according to a recent S&P Global report (“U.S. power generators reporting savings, other benefits from phasing out coal”), but “touting the cost savings of doing so while pushing a further transition away from the fuel.”

FOR THE POWDER RIVER BASIN, THE RETURN OF CONTURA ENERGY IS UNLIKELY TO SIGNAL A RETURN TO THE GOOD OLD DAYS. Three more big mines in the region will soon be auctioned off in the bankruptcy of Cloud Peak. Arch Coal and Peabody Energy have plans to merge the operations of their mines, including the largest in the country, in the near future. And Westmoreland Coal, another big producer in the region, only emerged from its own bankruptcy in March after finding few buyers for its mines.

As demand drops and production declines follow, the challenges facing the PRB will only multiply. Mines can close, sometimes unexpectedly, as the Blackjewel bankruptcy has shown, with devastating consequences to workers and communities. The likelihood that more mines will sharply scale back operations or close in the no-so-distant future is rising quickly—along with more layoffs, missed or lowered tax payments, unpaid bills to local businesses, and many other consequent problems.

State and local leaders in Wyoming and Montana need to accelerate their preparation, planning and assistance for dealing with these changes, even as they grapple with the displacement and financial devastation to families and communities that has already taken place.