PacifiCorp’s announcement last week that it will build thousands of megawatts of new wind, solar and battery storage capacity in its transition away from coal will reshape electricity markets across the West over the next 10 years.

Its impact will be felt nationally, too, perhaps nowhere as much as in the Southeast.

The reason behind this is PacifiCorp’s approach to battery storage, which it embraced as part of its preferred least-cost choice for meeting customer needs through 2035 or so. All told, the utility, which serves 1.9 million customers in six states (California, Idaho, Oregon, Utah, Washington and Wyoming) plans to add 595MW of battery storage to its system by 2025, all of which will be paired with new solar—nearly 3,000MW in total.

These newly paired resources—solar and battery storage—will be distributed across the utility’s service territory (as the graphic below illustrates) to help maintain system reliability as the company moves forward with a series of coal plant retirements. For example, PacifiCorp will build 354MW of new solar and an 89MW battery storage unit in Bridger, Wyo., by 2024; it also now plans to retire Unit 1 at the coal-fired Jim Bridger power plant in 2023 instead of 2037 as was scheduled previously. The 531MW coal unit came online in 1974.

Similarly, the utility plans to pair 900MW of solar and 225MW of battery storage in northern Utah to enable it to close Units 1 and 2 at the Naughton coal-fired plant in neighboring Wyoming. The solar and storage capacity will come online in stages from 2021-2024. Naughton 1 and 2, which came online in the 1960s and have a combined capacity of 357MW, will be retired in 2025, four years earlier than previously planned. 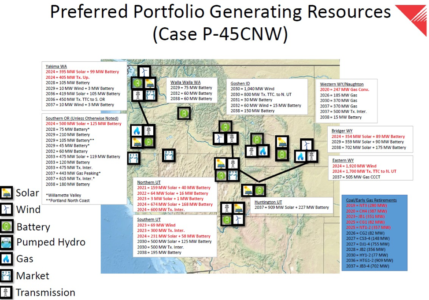 This is only the beginning of PacifiCorp’s transition. The company also intends to added 1,400MW of standalone battery storage to its system by 2028, and to have a total of more than 2,800MW of battery storage in operation by 2038, the end of the forecast period for its current integrated resource plan—all of which will enable the utility to soak up electricity from the 6,300MW of new solar and 4,600MW of new wind generation that it plans to add during this period. 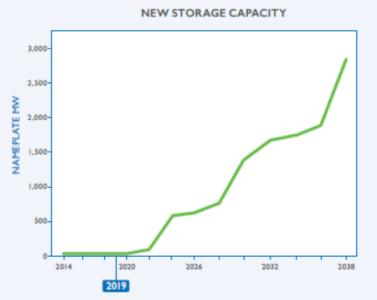 It will be hard for utilities and regulators in the rest of the country to ignore these plans.

AS NOTED IN AN IEEFA REPORT PUBLISHED LAST MONTH, COAL-FIRED POWER GENERATION IN FREEFALL ACROSS SOUTHEAST U.S., 45 coal-fired units across that nine-state region posted annual capacity factors of less than 25% in 2018, meaning they were not—and are not—needed for consistent power generation. Instead, these plants are being ramped up and down, either daily, seasonally, or both, to meet variable needs. Because this is not what the plants were designed to do, it puts more stress on the equipment and leads generally to higher operating costs.

Broad underperformance of Southeast coal plants presents a clear opening for solar-plus-storage plants, using solar during the day to charge storage units that can then be tapped during peak periods in the evening rather than using fossil generation, whether coal- or gas-fired. Examples exist already of this type of usage, even regionally, as IEEFA detailed in a June report, Advances in Electricity Storage Suggest Rapid Disruption of U.S. Electricity Sector. Players include utility companies from Florida to Massachusetts and Arizona.

“Today’s capacity factors for these plants are substantially lower than the historical capacity factors of the plants. It does not appear from the information in the IRPs that DEC and DEP have fully considered early retirement of any of these coal plants by replacing their contributions with other alternative generation resources or with energy efficiency (EE) and demand-side management (DSM) resources.”

Not all utilities have been as supportive of the solar-plus-storage option. In its latest planning update for utility regulators in North Carolina filed at the beginning of September, Duke Energy said its two subsidiaries in the state (Duke Energy Progress and Duke Energy Carolinas) planned to add just 300MW of storage coupled with solar through 2034—a minuscule commitment given that the two utilities serve 3.4 million retail customers and own more than 27,000MW of generating capacity. This lukewarm interest is highlighted in the following passage taken from public filings [emphasis added]:

“The Company is assessing the integration of battery storage technology into its portfolio of assets. Battery storage costs are expected to continue to decline, which may make this resource a viable option for grid support services, including frequency regulation, solar smoothing during periods with high incidences of intermittency, as well as, the potential to provide overall energy and capacity value. Energy storage, in some circumstances, also can have the potential to provide value to the transmission and distribution (T&D) system by deferring or eliminating traditional upgrades and can be used to improve reliability and power quality to certain locations on the Company’s distribution system.”

Southern Company’s Georgia Power subsidiary was equally noncommittal in its 2019 IRP. On the issue of integrating renewables into the grid, for example, the company said [emphasis added]: “New battery energy storage facilities may be viable resources for dealing with these challenges over time.” More generally, the company wrote: “Energy storage deployments are increasing across the United States and have the potential to make positive contributions to the electric system.”

In line with its weak statement, the utility, which has more than 2.5 million retail customers and owns more than 15,000MW of generation capacity, told Georgia regulators it planned “to develop a total of 50MW of energy storage capacity for this IRP to evaluate the technical and economic performance relative to expectations.”

So Georgia Power, too, seems out of touch on this front.

Interestingly, both utility proposals met pushback from state regulators, particularly in North Carolina, where commissioners ordered Duke to submit an analysis of its still-operating coal plants to show whether they are still the lowest-cost power option available:

“Today’s capacity factors for these plants are substantially lower than the historical capacity factors of the plants. It does not appear from the information in the IRPs that DEC and DEP have fully considered early retirement of any of these coal plants by replacing their contributions with other alternative generation resources or with energy efficiency (EE) and demand-side management (DSM) resources.”

Instead of looking for the lowest-cost alternative, the regulators said, it appears that Duke is simply assuming that the plants will continue to run “until they have been fully depreciated.”

As PacifiCorp’s decision suggests, utility companies are going to have an increasingly difficult time demonstrating that aging, infrequently run coal plants are still the lowest-cost alternative in today’s rapidly changing electricity markets. The sharp drop in solar costs and the ability to pair that resource with battery storage, whose price is declining sharply as well, makes them both a cleaner and a more economically sensible option for utilities nationally.