Joe Biden’s win in the U.S. presidential election has sparked thousands of words about coming changes to the electric utility sector; the reality is that the marketplace is already quickly pushing these changes. During the past three weeks, seven utilities have announced plans to close or convert almost 9,500 megawatts (MW) of coal-fired generation across the U.S.* At the same time, the U.S. Energy Information Administration estimated that a record 23 gigawatts (GW) of new wind generation capacity will come online this year, shattering the previous record of 13.2 GW set in 2012.

The coal closures/conversions span the corporate spectrum, including both independent power producers as well as traditional regulated utilities, and cover a broad swath of the country, from Florida to Texas and Wisconsin to Pennsylvania and Maryland, among others. The specific announcements include:

The specifics of each announcement differ, but all come back to a common theme: Keeping the coal plants open would have required significant capital investments, further undercutting their economic competitiveness and slowing the transition to cleaner generation resources.

Alliant, for example, said closing the 72-year-old Lansing plant would save at least $150 million in environmental upgrade costs. Given the company’s goal to be coal-free by 2040, those new costs clearly tipped the decision-making process. Instead, the company plans to add 400MW of solar capacity over the next three years, which will boost the company’s renewable generation in its Iowa service territory to 50 percent.

Alliant’s latest measure follows an earlier announcement this year that the utility would close its Edgewater coal plant in Sheboygan, Wis., by 2023, years earlier than planned. Indicative of the economic problems facing coal generators, Alliant said when it announced the closure that customers would still save money even if Wisconsin regulators allow the utility to recover $230 million it spent in 2017 to comply with new mercury control standards—an indication of just how cheap renewable generation has become.

Similarly, WE Energies said its customers would save $1 billion over 20 years by closing down the utility’s aging South Oak Creek plant (and another 300MW of coal generation to be identified next year), investing instead in a massive buildout of renewable energy capacity. The company’s plans include 800MW of solar, 100MW of wind power and 600MW of battery storage, along with 300MW of new gas power.

Coal’s rising environmental costs were also the driving force behind AEP subsidiary Southwestern Electric’s decision to close its Pirkey plant and shift from coal at Welsh, both in eastern Texas. Here, new ash cleanup requirements tipped the scales; the costs to comply with the rules would have undercut the plants’ economic competitiveness, particularly given the quickly growing amount of wind and solar capacity being installed in Texas and the Southwest Power Pool market. The recent EIA analysis noted that 6.7GW of new wind capacity is expected online in Texas and Oklahoma by the end of 2020—low-cost generation that will cut directly into the two AEP coal plants’ potential market.

The EIA analysis points to the looming expiration of the production tax credit (PTC; projects completed by the end of 2020 still qualify for the credit’s full value, with step-downs through 2023) as a key reason for the current surge in wind construction. But clearly the PTC is not the only force driving utility interest in wind, as is evident in the huge amount of capacity in the various regional market generation interconnection queues in the U.S. According to data from Lawrence Berkeley National Laboratory, more than 55GW of wind capacity was added to these queues in 2019 alone, pushing the overall total to 214GW. A similar story can be seen in the solar sector, where almost 110GW of new capacity was put in the various generation queues in 2019, raising the total to 265GW. An additional 54GW of solar-plus-storage was added in 2019, raising that total to 97GW (see graphic below). 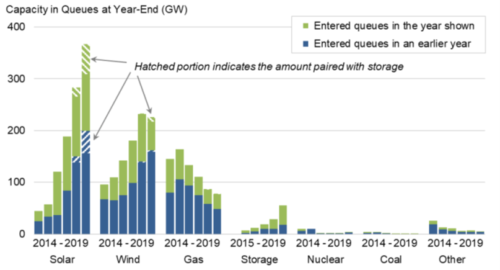 Some portion of this proposed capacity will not be built, but the rapidly growing green queues (coupled with the sizable decline in proposed gas generation and non-existent coal plans) vividly underscores the direction the industry is heading. New wind, solar and storage capacity is cheaper than existing coal-fired generation, paving the way for a rapid move to cleaner generation resources. The impact of the incoming administration remains to be seen, but it’s clear that utilities and independent power producers nationwide are quickly making plans to exit coal and embrace renewables.

*NB: All capacity figures presented here are based on summer generation capability. The nameplate capacity of these units totals 10,406.5MW.