September 26, 2019 (IEEFA Europe) ‒ Poland’s biggest electric utility, PGE, one of the world’s most coal-intensive energy companies, is delaying a transition to renewables even as the financial performance of its coal, gas and lignite deteriorates.

Majority state-owned PGE describes itself as a company in transition, but at present it is doubling down on coal and lignite, while it delays a renewables expansion until 2025-2030 and beyond.

That should be of concern, given year-on-year falls in the financial performance of the company’s conventional business, which comprises fossil-fuel power plants and combined heat and power plants.

In the past four years (2015-2018 inclusive), PGE has allocated more than three-quarters of a record PLN 37 billion (€8.5 billion) capital expenditures and acquisition investments to its conventional business, and 3% to renewables.

In the same period, earnings before interest, tax, depreciation and amortisation (EBITDA) have fallen every year at the conventional business, while the EBITDA of the renewables business, starved of cash, has risen.

PGE is coming around to the idea of large-scale renewables. But other utilities are going much faster, and have seen far more attractive capital returns as a result.

PGE said today, as it announced its first-half 2019 results, that next year it will add 97MW of new onshore wind, while over the next two years adding some 2,290MW of new coal and lignite.

Through the end of 2024, PGE’s share of renewables will remain frozen, as the company brings on-line new gas faster than it retires ageing coal units.

PGE’s big targets for renewables start beginning in 2025, making them too far away to be a certainty. For example, it is targeting some 1,300 megawatts of solar by 2025, compared with only 1MW installed today.

At a time of rising carbon prices, tightening air quality standards, and mandated coal phaseouts in Europe, PGE must move faster if it is to have any possibility of safeguarding its profitability. 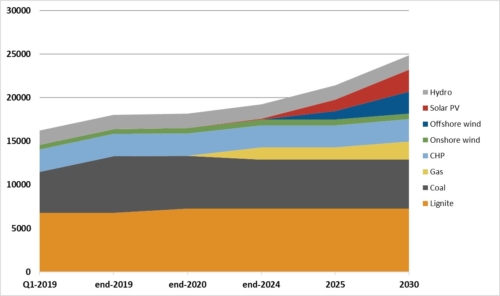 Gerard Wynn ([email protected]) is an IEEFA energy finance consultant based in London.

IEEFA Europe: Poland’s PGE would do well to accelerate plans to diversify away from coal