Just three-and-a-half years after emerging from its previous bankruptcy, Peabody Energy—the world’s largest private coal miner—admitted to investors on Monday that it could face yet another trip to bankruptcy court in the coming months. 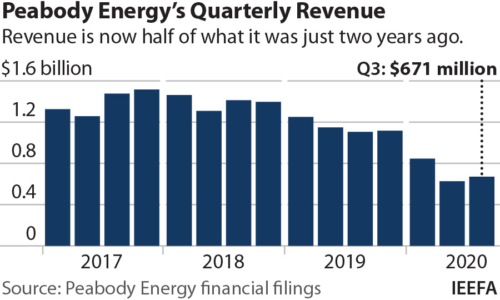 Coal bankruptcies in the United States have become increasingly common. Cheap gas and renewable power have steadily replaced coal in the U.S., contributing to a death spiral of weak demand, low prices, and inefficiencies that has pushed large and small coal companies into insolvency.

Prospects for a quick turnaround seem slim, given the bleak picture of the global coal market that Peabody painted for its investors. According to the company, demand for metallurgical coal used in steelmaking has yet to recover from the global impacts of the coronavirus, and the company expects only modest growth over the next several years. For thermal coal used in power plants, the company acknowledged sharp declines in global coal use from developed economies (see latest Q10, page 7) .

PEABODY HELD OUT HOPES THAT RISING DEMAND FROM ASIA COULD SPUR FUTURE GROWTH, even though many Asian countries have canceled or postponed new coal plant projects as they increasingly pivot to renewable generation. In recent months, governments have announced major national electricity policy shifts in Bangladesh, Vietnam, the Philippines, and Thailand. There have also been highly successful solar tenders from Malaysia and Myanmar that will further limit coal’s upside in Asia. Last month, Japan and South Korea announced ambitious net-zero emissions policy commitments, following China’s plans to become carbon neutral by 2060.

Peabody once seemed relatively immune from the changes sweeping through the sector. The company’s global footprint includes a number of low-cost coal mines in the U.S. and Australia. Its crown jewel—the North Antelope Rochelle mine in Wyoming’s Powder River Basin—is the largest in the world.

Yet some of its biggest rivals in the U.S. and internationally have outperformed Peabody by shifting away from thermal coal in favor of higher-value metallurgical coal used in steelmaking. Arch Resources now refers to its thermal coal mines as “legacy assets” that it plans to quickly wind down.

Peabody has been either unable or unwilling to pivot

But Peabody, with its massive suite of thermal coal mines, has been either unable or unwilling to pivot to a more profitable or financially sustainable business model. As a result, the company’s revenues have fallen dramatically since 2018. As recently as mid-2018, Peabody’s share price stood at $45. Now, it is below $1 per share—a critical threshold that could force the New York Stock Exchange to remove Peabody from its listings.

The plunge in its share price hints at a growing financial market consensus that thermal coal is now on a long-term decline that is likely terminal. Once again, investors, creditors, workers, and the communities with company mines should brace themselves as Peabody struggles to survive amid rapidly changing markets and a deteriorating outlook for the highly polluting, carbon emissions-intensive, technologically challenged industry.

Among the litany of setbacks affecting Peabody:

In releasing its third-quarter financial results, the company said it expects to violate key terms of its credit agreement by December 31. Without a reprieve from lenders, Peabody will likely default on its debt, forcing a financial restructuring and potential wipeout for shareholders.

To be sure, the COVID-19 crisis has deepened Peabody’s woes, as lower industrial electric demand and low gas prices pushed coal to a record-low power market share of 15% in April. But Peabody had been losing financial ground long before the coronavirus hit: The company has now posted losses for five consecutive quarters, revealing financial strains that long predated the current global economic slowdown. Even Peabody acknowledges this, saying that the pandemic simply “accelerated a multi-year decline in coal demand,” according to the company’s third-quarter report (p. 7).

As coal’s decline continues, it will likely push Peabody Energy, the former standard-bearer for the global coal industry, into financial oblivion.