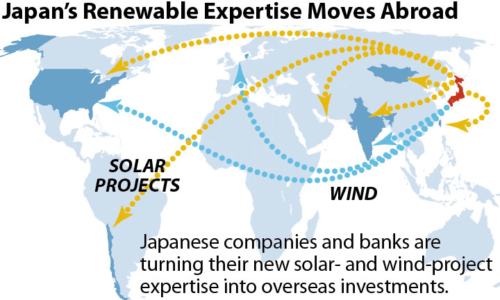 Among one of the key points we made in a report we published last week on Japan’s post-nuclear energy economy is how Japanese energy-investment capital is being pulled inextricably now toward overseas renewable-energy projects.

It’s a wrinkle worth repeating.

Our report—“Japan: Greater Energy Security Through Renewables – Electricity Transformation in a Post-Nuclear Economy”—details how the country is at a crossroads in how it decides where to go from here.

One hint on which way this decision will turn is in Japanese renewable investments abroad.

Several years of US$20-30 billion annual domestic Japanese solar PV investment—over 2013 through 2015—made Japan the second largest installer of solar PV globally behind China. Japanese companies, working in their own backyard, have gained important expertise and a deep understanding of the full implications of rapidly-evolving renewable energy technology. It’s also raised awareness of  investment opportunities emerging elsewhere in the inevitable transition toward a lower-emission global energy market. 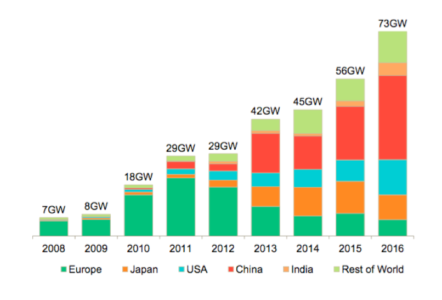 Investors are keen for renewables, a phenomenon that is freshly apparent in Japan’s continuing momentum across both domestic and overseas activity.

Since January, a series of mid-scale Japanese solar projects have progressed. First Solar announced it has secured US$240 million in financing from a Mizuho Bank syndicate for its 60MW Ishikawa Sogo solar project. Thai Solar Energy acquired the rights to develop a US$539 million, 155MW solar project in Onikobe, Miyagi prefecture. Nippon Renewable Energy has commenced a 41MW solar project in Tochigi prefecture. Tokyo Gas in conjunction with Shizen Energy has announced a new 60MW renewable joint venture project, part of a 600MW solar pipeline. LG Group of Korea has teamed up with Canadian Solar and Hanwhat Asset Management to develop a US$143 million, 55MW solar project at the Shin Mine site in Japan’s Yamaguchi prefecture. And the 31MW Solar Farm Minami Satuma also reached financial close, supported by a power purchase agreement from Kyushu Electric.

Even with all this activity, Japanese solar investment is actually being wound back to more sustainable levels. But an interesting companion trend is emerging: Leading Japanese companies are starting to look overseas for further opportunities in the renewable energy sector.

SoftBank, an early mover in the Japanese solar market with a total of 274MW of completed projects and a reported 360MW under development, is now leveraging its expertise in other markets. SBG Cleantech, a partnership between SoftBank, Bharti Enterprises of India and Foxconn of Taiwan, is seeking to develop US$20 billion of solar projects in India. Most recently, SBG Cleantech unsuccessfully bid for all 750MW of the Rewa solar project in Madhya Pradesh, in an auction that broke the previous record low for a solar tariff in India by 32 percent and broke below the US$45/MWh barrier. SBG Cleantech won its first solar tender in December 2015: a 350MW solar project at Ghani solar park in Andhra Pradesh with generation output to be purchased by a 25 year power purchase agreement (PPA) secured by NTPC, India’s largest utility. This builds on SoftBank’s Mongolian wind farm investments supported by Japanese International Cooperation Agency (JICA) financing.

In February of this year, JERA Co. announced it had acquired a 10 percent stake in Indian renewable energy firm ReNew Power Ventures Ltd for US$200 million. JERA is a joint venture between two of Japan’s major electric power companies; Tokyo Electric Power Co. (TEPCO) and Chubu Electric Power Co., both of which are largely dependent on thermal generation domestically. In its announcement, JERA noted that renewables investment is integral to its growth plans and cited the Indian government’s plan to install 100GW of solar and 60GW of wind by 2021-22. ReNew Power is one of India’s leading renewable energy developers with 1.5GW of renewable capacity in operation and an additional 1.8GW under construction. JICA’s Leading Asia’s Private Sector Infrastructure Fund (LEAP) provided US$390 million of debt funding for ReNew Power at the same time.

Also in February, Mitsui & Co. announced the acquisition of SunEdison’s Commercial and Industrial division, which specializes in providing rooftop solar generation. While this was a small acquisition (U.S. $15 million), Mitsui stated that it sees distributed solar as a key growth area both in Japan and abroad. With an equity interest in 11GW of power generation capacity worldwide, Mitsui is aiming to develop its energy business in line with global trend toward renewable and distributed energy.

Among its domestic power generation capacity, including in solar, Japanese conglomerate Marubeni owns overseas capacity of more than 10GW. In September 2016, the company, in partnership with China’s JinkoSolar, made headlines by submitting a record low bid for the Sweihan solar project in the United Arab Emirates. The bid of 2.42 US cents per kWh broke the previous record of 2.91 U.S. cents set in Chile just a month earlier. In March 2017 Marubeni and JinkoSolar signed a 25-year PPA for a 1.18GW solar plant.

JAPANESE INVESTORS, NOTABLY, ARE MOVING BEYOND SOLAR AND INTO WIND, PROMPTED BROUDLY by negative domestic interest rates. Japan’s banks especially have been attracted to renewable energy infrastructure investments abroad by their strong annuity yields backed by long-term PPAs from mostly highly rated utilities. According to Bloomberg New Energy Finance, Mitsubishi UFJ Financial Group (MUFJ) and Sumitomo Mitsui Financial Group were the two largest lead arrangers globally for clean energy asset financing in the first 10 months of 2016. These two banks in particular have moved into offshore wind in Europe. This experience places these banks in a strong position to support the growing Japanese offshore wind industry. (MUFJ has also invested in onshore wind, including by way of a co-investment with German insurer Allianz in the 225MW Great Western wind project in Oklahoma).

In February, Kyushu Electric’s renewable development arm, Kyuden Mirai Energy, won the right to develop a US$1.55 billion 229MW offshore wind project off the port of Hibikinada in Fukuoka prefecture. Kyuden Mirai joins a consortium of Kyudenko Corp, Hokutaku Renewable Energy Service, J-Power and Saibu Gas for construction of the plant, the first scheme to take advantage of a legal modification to the country’s Port and Harbour Law to allow for up to a 200-year use of designated water zones in port-designated areas to leverage existing port infrastructure for offshore wind project.

On the geothermal front, Inpex Corp acquired an effective 18 percent stake in the 330MW Sarulla geothermal power project in Sumatra, Indonesia, in June 2015. Once commissioned, by 2018, this will be the world’s largest geothermal power project. Itochu Corp and Kyushu Electric are co-equity investors alongside Ormat Technologies and PT Medco Power Indonesia. This past January, JICA’s LEAP fund provided a US$109 million loan to the 80MW Muara Laboh geothermal project in West Sumatra, a project being developed by Sumitomo, Engie and Supreme Energy assisted by credit guarantees from Nippon Export and Investment Insurance (NEXI).

In the global energy transition, Japan is developing an edge as its corporations grow increasingly experienced with investing and constructing renewable energy projects overseas across a range of technologies. These technologies will play a major role in Japan itself and will allow the nation to increase its energy security and help achieve its Paris COP21 commitments.

As IEEFA sees it, momentum is clearly shifting from Japan’s current overreliance on imported thermal power, a trend evinced most recently by Kansai Electric and TonenGeneral announcing just this month the scrapping of a plan to build a 1GW coal power plant in Chiba after a similar decision in February by Kansai Electric to scrap the Ako 1.2GW coal-fired power station proposal.

In the meantime, more supportive policies that including legal and economic separation of the national grid for use by all generators equally will encourage Japanese firms to apply their international experience to the domestic market.