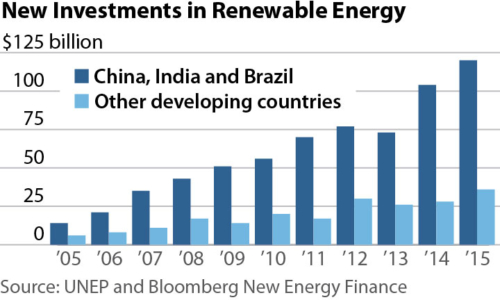 More than half of all renewable investment activity in the world last year occurred in developing countries.

And 2015 was no small year for renewables, as new investment set a record US$286 billion and total transactions (including refinancings) exceeded $US380 billion.

We’re published a memo this morning — “IEEFA Update: Emerging Markets Lead Global Investment in Renewables”— that gets into some of the detail.

We note that broad interest in renewables auctions is spreading—and growing in more and more countries—a sure sign that the trend is gaining momentum. Electricity tariffs in recent auctions have achieved historic lows, and most of the auctions have been oversubscribed.

Our memo asks (and answers) a few questions:

What Are the Key New Emerging Markets in Renewables?

Among developing nations, China, India and Brazil have drawn the most renewable energy investment, a trend that has been supported by strong, clear policy ambitions.

Chile, Mexico, and South Africa are emerging now, took, as important players as well, while Argentina, Jordan, the Philippines, Turkey, and Russia are cited increasingly as attractive renewable-investment countries relative to expectations, especially in solar.

And cumulative wind installs have nearly doubled in the past three years in China, Poland and Turkey, according to the World Wind Energy Association.

Other players are emerging as potentially large solar and wind markets. Among them: Taiwan, which has just upgraded its renewables target to 25 GW by 2025, mostly from solar (from almost nil today).

Why Are Emerging Markets So Attractive Today for Renewable Energy Investors?

Some of the answers we include on this point included that fact that most developing countries are lucky in terms of “resource quality.”

We also think that the relatively high rate of GDP growth in developing countries compared with the developed world makes renewables in emerging economies and especially strong draw in the global hunt for yield.

New advantages are unfolding in developing market, especially where favorable policies and economies of scale have brought down total installation costs (in India, for example, solar tariffs have fallen 40 percent in just the past 18 months).

What Are the Policy Best Practices Driving Renewables Investment in Emerging Markets?

We see several common characteristics across a number of emerging economies where renewable energy is taking off.

To be sure, investing in developing-market renewables is not without risk, and in our memo we get into what some of those risks are.

But the risks, by our lights, is far outweighed by the upside.