SYDNEY—At the first ever ‘Belt and Road’ forum hosted in Beijing in 2017, President Xi pledged the US$900 billion infrastructure project would ‘seize new opportunities… and achieve green and low-carbon development.’

Yet as analysis this month demonstrated, Chinese funding is responsible for more than a quarter of all new coal plants outside its borders, many of which are using out-dated technology no longer allowed in China. 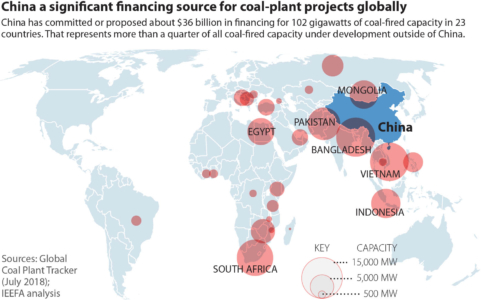 President Xi must swiftly reconcile rhetoric and reality. The consequences of a new generation of coal will be toxic for the environment, toxic for financial institutions involved and toxic for China’s reputation.

Failure will be a green dream turned nightmare. With the US destined for at least two more years of the energy policy equivalent of trying to remarket the horse and cart, success will mean reinforcing China’s place as the global renewable superpower.

A case in point is Pakistan, a country on the brink of expanding its electricity generation capability with Chinese financed and built power plants. China’s role in Pakistan’s infrastructure roll-out, known as the China-Pakistan Economic Corridor (CPEC) is a key part of its Belt and Road Initiative.

Central to the power construction plans is a fleet of new coal-fired power plants some of which will be fuelled by imported coal.

However, there is growing concern over the burden fossil fuel imports place on the current account balance and foreign currency reserves. Indeed, the 1,320 MW Rahim Yar Khan imported coal-fired power proposal was shelved only last month.

With the Rupee already weakened, Pakistan is alert to the problem and is reportedly a focusing on extending the nation’s hydro power build out.

However, a faster, cheaper and more energy-secure alternative is available.

Even leaving aside the health and climate impacts, without subsidies, coal can no longer compete with renewable energy on cost.

Given new plants have a lifespan of over 30 years, a bet on the dirtiest of the fossil fuels is a guarantee of billions of dollars of stranded assets Pakistan can ill afford.

This is not lost on some of Pakistan’s provinces. Sindh, for example, is forging ahead with wind and solar. Nationally, IEEFA estimates reaching a 30% share of electricity generation from renewables by 2030 is highly achievable.

The cost-driven transition to renewables is of course a global trend set to hasten. While the coal price has soared over the past two years, scale combined with technical advances mean renewables will continue to get cheaper.

THE IMPACT ON THE COAL INDUSTRY IS STARK. According to financial analysts Carbon Tracker, 42% of the world coal fleet is already losing money, with this number estimated to rise to 96% by 2030.

In South Africa for example, the China Development Bank (CDB) issuance of a US$2.5bn to the country’s energy utility Eskom failed to stop its unsustainable debt levels increasing tenfold over the past decade as it doubled down on coal. There, the price of mismanagement will be paid by families and business who face a 45% increase in energy prices.

This may not break the bank in China, but the reputational damage of supplying high-cost out-dated equipment will be longer lasting. Already, BRI countries such as Malaysia are pushing back against deals viewed as more in China’s interest than their own. In terms of energy, this centres around the suspicion China is providing concessional finance overseas to provide a soft-landing for a dying domestic coal industry.

This can be avoided, and China has the opportunity and the capacity to employ its unique domestic experience to genuinely catalyse ‘green and low-carbon development.’.

Let’s not forget that China has already exceeded its 2020 solar target by more than 50%. Whilst there continue to flaws, China’s massive expansion gives it unparalleled insight into the policies, investment and R&D required to create energy infrastructure fit for the next generation, rather than one which should be consigned to the last.

Switching its emphasis firmly away from coal would be win-win.

Good news for countries like Pakistan and the millions of other people living along the ‘Belt and Road’ who will avoid decades of polluting high-cost power, and good news for China’s reputation as a trusted partner.

This commentary first appeared in the South China Morning Post on 10 February 2019.