Call them what you will but “capacity payments” in the European utility industry today are looking more and more like subsidies to prop up a fading industry threatened by the rise of renewables.

It’s an expensive arrangement that often rewards decrepit coal- and other fossil-fuel-fired power plants for waiting in the wings—not for generating electricity. 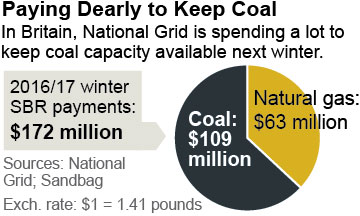 Coal and gas utilities will argue that capacity payments are justified for two reasons: first, that they’re only fair because renewables are supported too (by long-term feed-in tariff structures), and second, that the grid could fail without capacity payments to support back-up power.

But capacity payments are supporting an increasingly uneconomic form of power that it on its way out as energy markets evolve and as climate change and air-quality regulations grow. Today there are more cost-effective ways to support the electric grid.

An illustrative case in point of capacity payments gone awry is the U.K., where such payments to coal-fired plants have risen lately, contradicting national policies that mandate a complete phase-out of coal power by 2025.

The U.K. has three types of non-energy payments to coal:

BRITAIN IS NOT ALONE IN WESTERN EUROPE IN CONTINUING TO KEEP COAL-FIRED POWER ON LIFE SUPPORTS LIKE THESE. Spain also has a capacity market and Italy is planning one.  Germany recently introduced a “standby capacity reserve” dedicating some 230 million euros annually for seven years to pay for 2.7GW lignite-fired standby capacity— in advance of those power plants being permanently decommissioned.

Such subsidies are hard to justify given the falling cost of renewables. They are especially questionable in the European Union, whose emissions trading scheme allocated windfall profits to utilities of at least $10 billion cumulatively from 2005-12. The windfall was meant to help utilities transition to a low-carbon future, but these companies have since played almost no part in the growth of small-scale renewables that compete with coal- and gas-fired plants across Europe, and which have now led to the calls for additional capacity payments.

The Swiss grid system operator, Swissgrid, has promoted an alternative to capacity payments, based on a market-based model. Such an approach would seem prudent in the U.K., too, where a recent analysis of the British electricity system suggests that far from being vital, coal-fired power can be rapidly eliminated over the course of the next few years without hurting national energy security. Supports for coal-fired electricity can be systematically replaced, instead, with investments in efficiency, demand-response programs, storage and grid improvements.

Capacity-payment subsidies like those on display in the U.K. don’t just delay the inevitable. They set a terrible example.

The Turkish Parliament very recently approved a subsidy that will allow lignite-fired power plants to sell electricity at prices higher than current wholesale power prices. Proponents of this change have pointed to the U.K.’s out-dated capacity market as a model.