Data Bite: A Wind-Generation Record in the Lone Star State 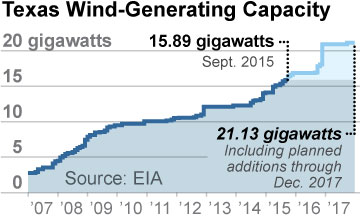 Texas is characterized typically as an oil-and-gas state, but the Lone Star State is also far and away the biggest producer of wind energy in the U.S., outpacing second-ranked California by a long shot.

Globally speaking, Texas is the sixth-biggest producer of wind-powered electricity, right behind India and slightly ahead of Great Britain.

Why? One reason is that it’s among the windiest regions in the U.S. The High Plains region has an abundance of wind, as shown in this “wind resource map” from the Department of Energy. Every state in the U.S. has wind-energy potential, and 39 states have utility-scale wind farms, but America’s great “wind corridor”—it’s most wind-rich region—runs from the Dakotas and eastern Montana into parts of Iowa, Minnesota, and Wyoming south over most of Nebraska, most of Kansas and parts of Oklahoma and New Mexico. In Texas, the wind blows strongest and steadiest across its western expanses and in the high flatlands of the panhandle. Texas has considerable offshore wind-generation promise too, as seen in a Department of Energy analysis that shows where 22 states have offshore wind-development potential.

Another reason Texas is at the forefront of wind-energy development is its energy-entrepreneur history. One example of that: T. Boone Pickens calling the U.S. “the Saudi Arabia of wind” when he proposed an ambitious federal wind-energy development policy a decade ago. Pickens as it turned out was ahead of his time, but the Sierra Club, among others, lauded him in part because he was an oilman who could imagine capital markets moving big-time into renewable energy, as they are doing today.

THE HURDLES TO SUCH AMBITIONS INCLUDE CHALLENGES AROUND INTEGRATING WIND INTO THE ELECTRIC GRID AND IN OVERCOMING entrenched fossil-fuel interests. The former has proven more manageable than the latter in some ways.

Certain data bites say a lot. On the Wednesday before Thanksgiving this year, wind turbines in set a Texas record for wind-generated electricity: 12.97 gigawatts. 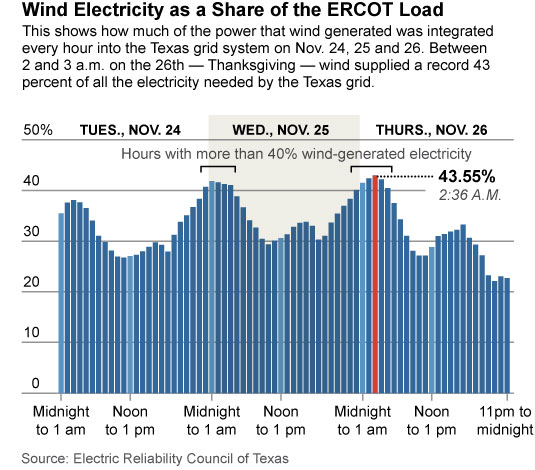 It was one of many recent record-setting days that collectively indicate a remarkable trend in the state’s installed wind capacity. Just a month earlier, on Oct. 22, Texas wind turbines for the first time generated more than 12 gigawatts. All of that power was fully integrated into the grid operated by the independent system operator, the Electric Reliability Council of Texas, or ERCOT, which manages the flow of electricity to 24 million customers. Perhaps most impressive was the record notched on Thanksgiving Day, when wind provided 43.55 percent of total electricity demand on Texas’s power system. As favorable weather conditions persisted, wind generated more than 40 percent of ERCOT’s power for 11 of 72 hours in total from Nov. 24-26, and more than 30 percent during the rest of the hours over that three-day span. 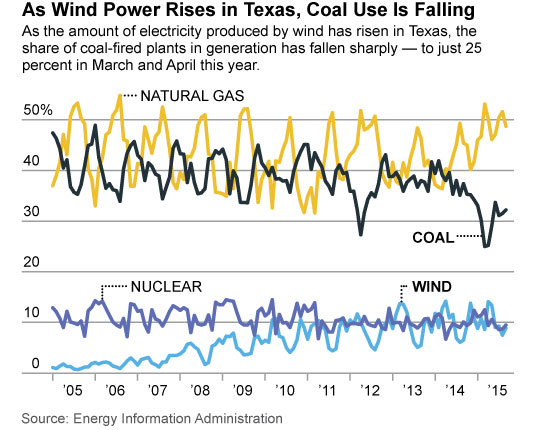 Two seasonal factors were working in wind’s favor on those particular numbers. First, the Great Plains region gets its strongest winds in the spring and fall. Second, demand on the Texas grid is much lower during those months, when cooler temperatures reduce demand for air-conditioning. Yet the trend toward more wind-powered electricity capacity is unmistakable, as seen in the second chart here, which shows Texas’ trajectory over the past few years and the EIA outlook through 2017.

One other statistic that helps put the Texas wind story in perspective: The 15.9 gigawatts of Texas wind-powered electricity capacity notched this past September is more than much of the solar power produced nationally (those 15.9 gigawatts was more, for instance, than the entire solar-generating capacity of the U.S. as recently as June 2014). Texas will add an additional five gigawatts of wind-generated electricity by the end of next year, according to Energy Information Administration projections, potentially allowing wind to provide half of the state’s electric needs at times. It is all but certain that new records will be set.

The fuel that is losing out the most to wind is coal. From 2005 through 2011, coal-fired plants typically provided more than 33 percent of Texas’ electricity and often provided as much as 45 percent. In 2015, coal’s share of generation was less than 33 percent for seven of the nine months through September, and dropped to 25 percent in March and April, when turbines were spinning in strong spring winds. Given the records set over Thanksgiving week, robust wind-powered capacity growth next year, and persistently low prices for natural gas, this trend toward less reliance on coal is likely to continue if only because the marginal cost of the wind-fired electricity is near zero—“free electricity,” as informed energy analysts see it—while fossil-fuel-fire plants require coal or gas for every watt they produce.

Meantime, the Texas wind industry, like the entire U.S. wind industry, is up against a fierce anti-renewables lobby that favors entrenched interests like the coal industry (as detailed in a recent Carbon Tracker report co-authored by IEEFA). The hopeful news on this front is that Congress appears to be leaning toward extending federal tax incentives that could help make what’s happening in Texas a broader national phenomenon.