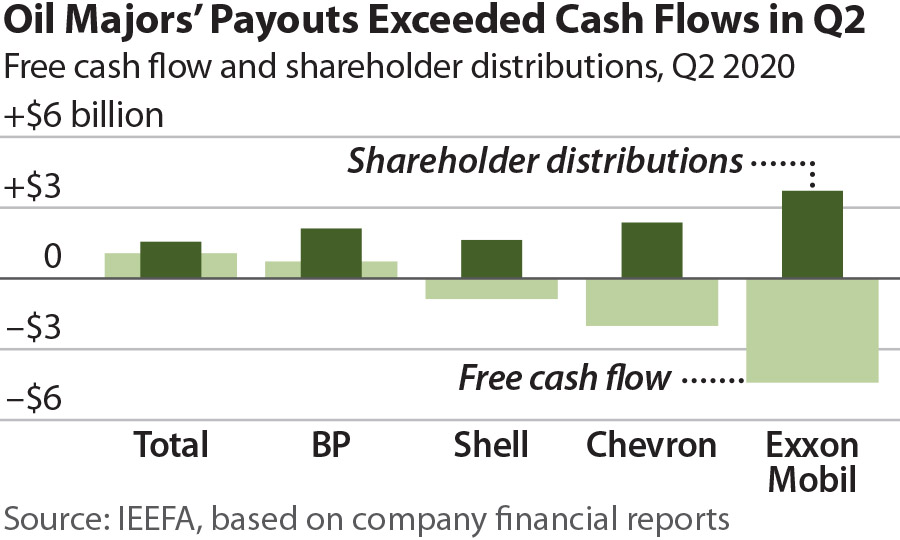 ExxonMobil, Shell, Chevron, Total and BP paid more to shareholders than they generated from operations

August 25, 2020 (IEEFA)— One day after ExxonMobil was kicked out of the Dow Jones Industrial Average, a new analysis shows that the company suffered through one of its worst quarters in years, characterized by sharply negative free cash flows and massive borrowing to sustain its shareholder dividends.

Overall, the five global oil and gas supermajors posted disappointing results after the worldwide coronavirus crisis crimped energy demand and sent prices plummeting. But ExxonMobil’s performance stood out as particularly bad, according to figures reviewed by the Institute for Energy Economics and Financial Analysis.

The five supermajors—ExxonMobil, Royal Dutch Shell (Shell), BP, Chevron, and Total—collectively paid $16.9 billion more to shareholders than they generated from their core business operations, plugging the gap with borrowing and asset sales. The supermajors also continued a trend of downgrading the value of their assets during the quarter. Shell wrote down $16.8 billion in assets; BP, Total and Chevron took write-offs of $11.7 billion, $8.1 billion and $4.8 billion, respectively.

“It was a dismal quarter capping a disappointing decade for the global oil supermajors,” said Kathy Hipple, the report’s lead author.

ExxonMobil sustained the worst performance among the five supermajors during the quarter. Its low free cash flow (negative $4.4 billion) and high shareholder payout ($8.1 billion) accounted for almost half of the cash shortfall from the supermajors.

The second quarter was rocky for most parts of the global economy, as the coronavirus pandemic shut down demand in a wide variety of markets. The IEEFA analysis, however, shows that financial strains for oil and gas majors predated the pandemic. All told, the five companies have funneled $586 billion to shareholders since 2010 while generating only $343 billion in free cash flow (the amounts that companies generate from their core business, minus capital spending).

“The supermajors have engaged in deficit spending for years,” said Clark Williams-Derry, a report coauthor. “But their performance last quarter was particularly dire.”

As oil and gas revenues collapsed, the five supermajors reported an aggregate $5.5 billion in negative free cash flows in the quarter, mostly the result of a negative $4.4 billion in free cash flow from ExxonMobil and a negative $2 billion from Chevron. The red ink flowed even as the five companies slashed capital expenditures from $21.6 billion in the second quarter of 2019 to $15.4 billion last quarter, a 29 percent decrease.

More alarmingly, four of the five companies kept shareholder dividends steady despite their disappointing performance. To help plug their cash deficits, the five companies borrowed heavily, increasing their cumulative debt to $290 billion, a $50 billion increase over the previous quarter. Meanwhile, the amount of cash that the supermajors raised from asset sales dipped to $3.1 billion, a decline of $400 million from the first quarter of 2020.