The closer one examines the financial position of the companies behind the Dakota Access Pipeline project, the weaker they look.

We outlined some of the imminent deadline risk around the project in a report we published a few weeks ago (“The High-Risk Financing Behind the Dakota Access Pipeline”), noting how the developers are facing a Jan. 1 completion deadline they cannot meet.

Missing that deadline could trigger a costly reset with producers and shippers, who will be able to renegotiate contracts signed two years ago with the pipeline company. This will most likely work to the disadvantage of the pipeline’s developers because oil prices have fallen by more than half since late 2014 and because the value of transport contracts are tied so closely to oil prices.

Our report also concluded that the project is an example of overbuild in oil infrastructure in the Bakken region of North Dakota and that, as such, it risks becoming a stranded asset.

Energy Transfer Equity has grown explosively since 2011, and for that matter so has ETP. Both companies have taken on massive debt to fuel this growth. And while asset values have soared at both the parent company and the subsidiary, revenues have fallen sharply since 2014. The chart below for ETP illustrates the problem (ETE would show a similar pattern). 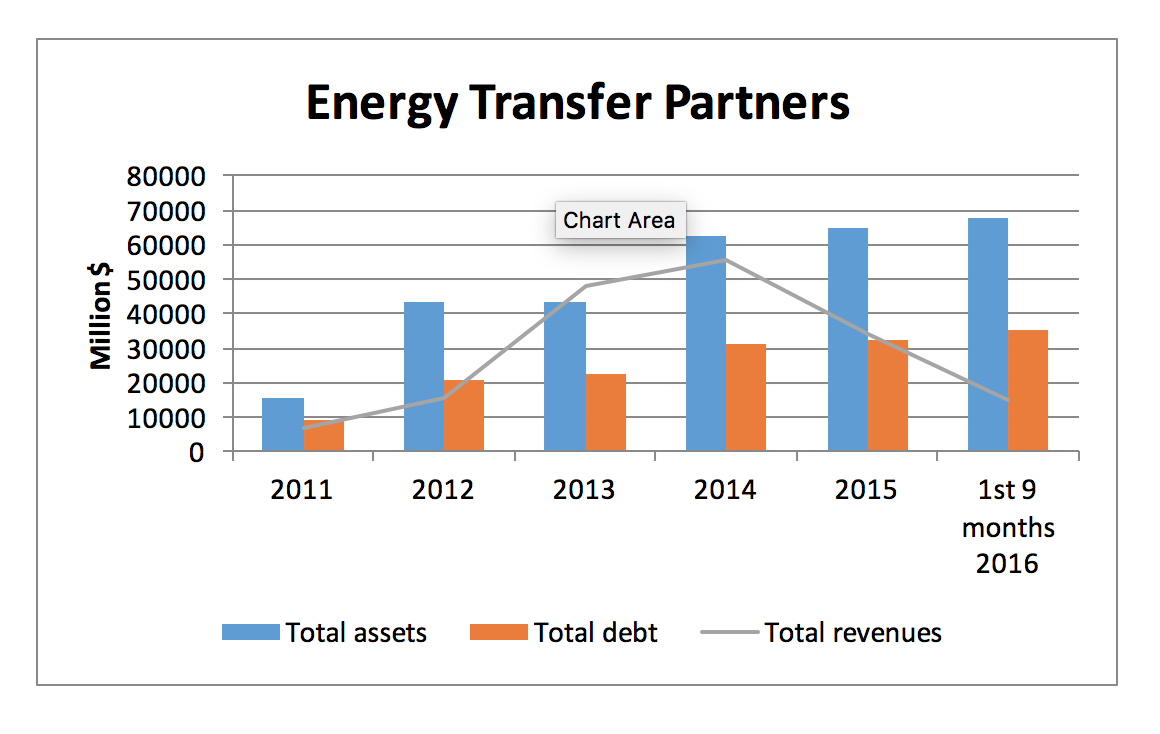 ETP, like many oil and gas companies, has been squeezed badly by the collapse in oil and gas prices that began in late 2014. The company has been battered on this front, and in the meantime has been spending on several projects that have yet to produce revenue. Big capital spending coupled with weak revenues over four of the last five quarters translates into ETP having paid out more to investors than it has earned from operations—a circumstance that is obviously unsustainable and may well soon spur a severe cash crunch.

Energy Transfer Equity has $1.2 billion in debt maturing in 2017 but had only $472 million of cash on hand at the end of the third quarter of this year. ETE might roll over some of this debt in hopes of buying some time. But if the company is to borrow more money at reasonable rates, it will have to keep its many projects on schedule—not just DAPL, but, among others, the Revolution, Rover, Permian and Bayou Bridge pipelines.

Moody’s placed both ETP’s and ETE’s credit rating on negative outlook in June. The ratings agency cited an “extremely challenging” operating environment for oil and gas companies across the board. It noted the effect of weak commodity prices, the long-term implications of two years of heavy spending cuts in exploration and production, weakening counterparty credit, “limited near-term prospects for EBITDA [earnings before interest, tax, depreciation, and amortization] growth,” and “costly access to equity capital markets.”

ETP, Moody’s concluded, “faces heightened ‘execution risk’ in its efforts to shore up its balance sheet.”

Moody’s currently rates ETP debt at only one notch above junk status, and in November it put Sunoco Logistics on negative outlook.

BEYOND THESE WEAKNESSES, THE ENERGY TRANSFER COMPANIES HAVE SEEN A DELAY IN SELLING A STAKE IN DAPL to raise $2 billion in cash. In August, the companies announced that sale, of a 37 percent stake of two Bakken pipelines (DAPL and Energy Transfer Crude Oil Pipeline) to Marathon Petroleum and Enbridge Energy Partners.

ETP executives say the sale cannot be completed, however, until DAPL receives its final easement from the U.S. Army Corps of Engineers. Approval of the easement was delayed  indefinitely in early December.

The original sale contract includes an additional detail of particular importance: Any party to the transaction can walk away after Jan. 3, 2017.  This week, Marathon and Enbridge agreed to change that date March 31. But while Marathon’s or Enbridge’s interest in owning a stake in the pipelines may not have materially changed in the past few months, the easement question and may eventually present enough of a wrinkle for them to walk away from the project entirely.

This would significantly harm ETP’s already rickety finances, but it would keep Marathon and Enbridge from having to pay billions for a project that is at increasing risk of becoming a stranded asset.

IEEFA Update: The Public-Relations Disaster That Is the Dakota Access Pipeline