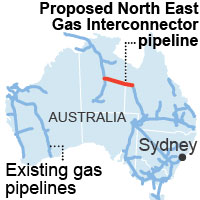 The report—“Pipe Dreams: A Financial Analysis of the Northern Gas Pipeline”—also examines the implications of awarding an unregulated monopoly over the pipeline to Jemena, a Singaporean and Chinese government-owned company, via State Grid Corp of China (60 percent) and Singapore Power (40 percent). The report notes that Jemena has paid no income tax in Australia in the four years to 31 December 2015. 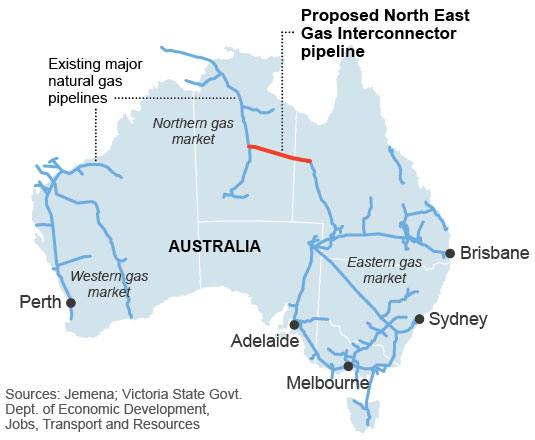 The construction of the northern gas pipeline is predicated on a set of fundamental misunderstandings, the most glaring of which is the lack of customers. The shining hope of increased royalties through the establishment of a shale gas industry appears to have blinded the Northern Territory Government to economic reality. Developing a pipeline which aims to deliver high-cost gas into an already saturated market is the whitest of white elephants.

Backers of the NEGI proposal have already cut capacity by 25%, with the pipe resized from 14-inch to 12-inch pipe in April 2016.

Our research suggests this scale-back is likely to be only the beginning. In April, the International Group of Liquefied Natural Gas Importers (GIIGNL) estimated the global LNG market in 2015 was over-supplied by 26 percent.   Meantime, global LNG supply is rising rapidly, with global LNG liquefaction capacity expected to reach around 400 Mtpa in 2020, an increase of 30% from 2015.

The Australian government forecaster, the Office of the Chief Economist, has predicted a global surplus of LNG capacity out to 2030.  Moreover, at prices seen in the first half of 2016 to date, the entire east coast onshore gas export industry of Australia is running at a loss.

The Northern Territory shale gas industry is in its infancy and the reality is that production of this onshore gas would come at significantly higher cost than even the east coast onshore gas export industry, which is already too expensive in a global context. The gas produced would be expensive at the wellhead, expensive to transport across an unregulated transmission network and expensive to liquefy in high capital cost plants.  Developing this high cost shale gas resource, let alone a pipeline, flies in the face of common sense.

Our analysis also calls into question any potential economic benefit of the project.

Even if gas prices were to unexpectedly increase, profits from any NEGI gas production would flow offshore due to the unregulated monopoly awarded to Jemena.

The Northern Territory government has gifted two overseas governments the right to run a natural monopoly that is unregulated and the pipeline can charge whatever tariffs it sees fit.  If the development of the gas resources of the Northern Territories onshore fields is to proceed, this monopoly service provider will accrue the majority of the economic benefit.

In 2015, Jemena restructured and issued $800m of convertible notes to its shareholders.  The rate charged on these notes, 10.25%, is far above a commercial borrowing rate for a company such as Jemena.  APA Group (APA), a similar company operating pipelines, paid an interest rate of 4.97% in 2015.

Our report concludes that this is a method of transferring wealth generated by Jemena to the parent shareholders (the government of China and Singapore) and to avoid paying Australian Income tax.

With no viable market, uncertain production and what looks to be a poorly negotiated deal with Jemena. It’s hard to escape the conclusion this project is an ill-conceived pipe-dream.

Bruce Robertson is an Australia-based investment analyst for IEEFA.