February still has an entire week left but the understatement-of-the-month award has to go to Kevin Crutchfield, the chairman and CEO of Alpha Natural Resources. 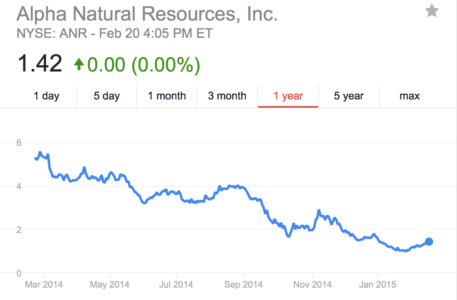 “Yet again a challenging year for the coal industry,” Crutchfield said when the company came out with its grim fourth-quarter and full-year financial results for 2014.

“Challenging” is a nice word for “dire.” Alpha’s numbers chronicled a bad year indeed, and the company’s forward-looking guidance indicated little likelihood of recovery in 2015.

None of these trends is likely to change substantially in 2015. Revenues will probably be eroded further this year, as there is little indication of a price pickup. The company badly needs an increase in the price of metallurgical coal, but it’s probably not going to get one (last week Goldman Sachs lowered its outlook on the price of metallurgical coal through 2016). Company liquidity will likely be pressured by the fact that Alpha must pay off a $154 million note.

The company could see its shale-gas venture start drilling in 2015, depending on the prices for natural gas—which are now low—but this initiative won’t do much for the company’s finances.

So a fifth year of losses is likely.

Alpha is responding to this likelihood by reducing capital expenditures, and it may also close more mines, continuing a trend established over the past few years. It might even be in the market to sell some of them, looking for a reasonable deal even in these tough times.

The company has $3.9 billion in long-term debt and faces looming payoffs over the next several years. How it will approach this future after a long period of poor financial performance and limited outlook remains to be seen.