The last coal-fired power plant to come online in Virginia—and one of the newest in the country—is operating at marginal capacity and remains online only because it is being financed through a largely hidden ratepayer subsidy to its owner.

VCHEC ran at 19.86% capacity during the first eight months of this year, according to the most recent data from S&P Global Financial Intelligence, and it produced no power at all in May and June.

Commission filings emphasize how running VCHEC makes little financial sense by pointing out, for instance, that keeping it online will cost 22 times what it would cost to operate the underperforming two-unit Clover plant in Halifax County, which had a capacity factor in 2019 of less than 17% and which Dominion’s integrated resource plan (IRP) indicates will close by 2025.

The Virginia City Hybrid Energy Center (VCHEC), an 8-year-old, 624-megawatt coal-fired power plant in Wise County, Va., built and run by Dominion Energy through its subsidiary Virginia Electric & Power Co., is struggling to compete with other regional sources of power generation. Market and policy forces will continue to work against the plant, keeping it at risk of closure for the foreseeable future. 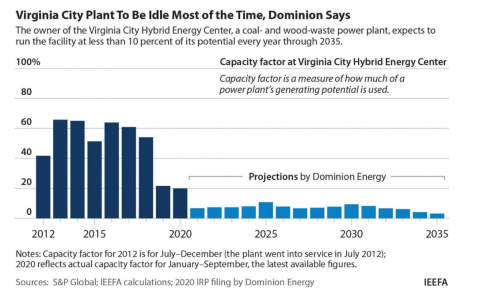 VCHEC ran at 19.86% capacity during the first eight months of this year. At its peak performance in 2013 and 2014, it operated at slightly more than 65% of its capacity, but has fallen off over the past two years, to 54% in 2018 and 22% in 2019. If it remains online—which is unlikely—Virginia Power estimates its annual capacity factor will average less than 7.7% over the next 10 years, meaning its output will be almost insignificant.

Economic-transition models around the early closures of Navajo Generating Station in Arizona, the San Juan power plant in New Mexico, the Centralia Coal Plant in Washington, and part of the Comanche Generating Station in Colorado can serve as models for responsible change. Closure of VCHEC will cause local economic pain but ignoring the likely possibility will only lead to unnecessarily abrupt consequences.

Lawyers for Dominion have argued that it is in no one’s interest for the company to reveal financial information on VCHEC. Quite the opposite is true, however, as the community around VCHEC will face a needlessly sudden economic hit in terms of jobs and tax revenues if it is not informed about the likely future of the plant. VCHEC employs 153 full-time workers, supports an additional 350 to 400 jobs in the area, generates as much as $8.5 million in local tax revenues to Wise County and the town of St. Paul, and creates as much as $40 million annually in local economic activity. Dominion’s cooperation and partnership will be necessary to support the community’s preparation for plant closure and transition.

The decline of VCHEC is not occurring in isolation. Coal plant closures have become an almost weekly occurrence in the U.S. as cheaper forms of generation come online and as capital markets abandon coal in line with investor and customer preferences. While market forces are driving change, policy is a factor as well, and this is as true in Virginia as it is anywhere. Enactment of the Virginia Clean Energy Act in April signalled the beginning of the end of coalfired electricity generation by Virginia power producers, of which Dominion is the largest.

Local and state officials and other community leaders in Wise County should be planning now for the local economic impacts of VCHEC’s closure by requiring full transparency from Dominion on its plans for the plant and by aggressively pressing for serious reinvestment in the local economy.

Brent Israelsen is a guest contributor at IEEFA.