An Opening for a Better Energy Course in Egypt 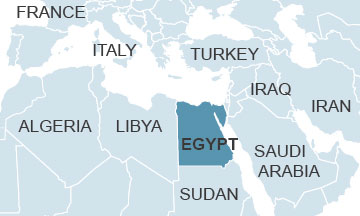 “80 Gigawatts of Change,” an important new report commissioned by the Egyptian Center for Economic and Social Rights and the Heinrich Böll Foundation offers some crucial and timely detail on how the most populous country in the Middle East might best manage its energy future.

Egypt today has an electricity shortage—the country requires 30 gigawatts of electricity to keep its lights on but has access to only 26—and its deficit causes frequent outages and disruption during peak-demand times. The situation only stands to worsen without wise action: the government anticipates demand for electricity to reach 80 gigawatts by 2035.

Egypt’s electricity sector, as it stands, is fueled primarily by natural gas, which accounts for 91 percent of generation (most of the rest comes from hydroelectric power).  The Egyptian government sees construction of a new fleet of coal-fired power plants as the fastest and best way to address its electricity problem, a move—if it proceeds—by which Egypt would go from producing zero gigawatts of coal-fired electricity to 11 gigawatts by 2035. 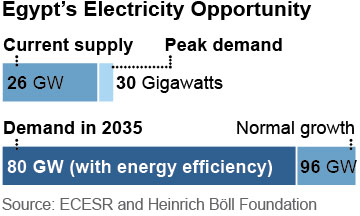 When confronted with energy shortages (and the political unrest that can come with them), leaders often look for fast answers. And indeed some challenges are best solved with extraordinary measures taken with little public input. Prudent energy-infrastructure policy, however, is rooted in analysis and input that takes time and thought. Mistakes made today will have long-lasting and costly consequences.

This new report lays out seven alternative energy scenarios. All see Egypt continuing to rely heavily on natural gas for electricity generation, although the dependency varies by how much and which new energy sources are developed.  Each scenario reshapes the Egyptian system by turning to specific core fuels or technologies —wind, solar, nuclear, coal, hydro and biomass—and then building around that core. Each scenario analyzes access, cost, emissions, job creation and import/export dynamics.  Eacjh also includes a new energy-efficiency dynamic that will create jobs and lower costs along the way.

The report makes no judgment of any particular scenario, but it includes numbers that tell a story worth noting. The coal-buildout option produces fewer jobs than the others, emits more CO2, relies heavily on imported fuels and makes no progress toward improving electricity access. Other scenarios (including one constructed around a decentralized electricity model) produce more jobs, emit less CO2, reduce reliance on imported fuels and bring the potential to make electricity more accessible to the poor.

Our research at IEEFA shows that technology and cost structures for wind and solar energy are improving at a far faster rate than those of coal-fired power plants. New-build tariffs for renewable energy are coming in at historically low prices in a number of countries, and renewables come without the built-in inflation factor that comes with coal-fired electricity. Coal-fired electricity falls short in one other key arena: its core technology is behind the innovation curve and out of step with the times.

“80 Gigawatts of Change” notes too how Egypt’s energy sector is heavily subsidized by the public sector, amounting to 14.5 percent of national GDP. This supports an aging fossil-fuel dependent model of economic development. . The report also touches on the need for a better delivery system of more robust regulation.

The report’s core recommendation is crucial: That Egyptians expand their energy-policy work by considering longer-view scenarios, to 2050. Over-the-horizon planning can show how energy systems, which typically require investments in infrastructure with a useful life of 40-50 years, will perform over time.

This sort of planning will serve Egypt well. It builds a sound electricity system and it can also build public confidence in both the government and the private sector rather than undermining it.