Tri-State’s power-generation plans through 2050 show it will continue to rely on coal even as electricity markets move swiftly toward other, less costly forms of generation. This belies the public relations campaign by Tri-State that portrays itself as being on the vanguard of a fast-moving national transition away from coal.

In contrast to declining prices for renewables, Tri-State projects substantial price increases in the next 30 years and is already charging members more than market norms.

While Tri-State leaders have seemed to see relationships with its members as largely transactional— “just business”— member co-ops perceive the company’s executive behavior as high-handed and its ties to Tri-State too costly to continue and long overdue for restructuring.

As electricity-generation markets continue to shift rapidly away from coal and toward other sources of generation, a major power wholesaler in the western United State faces an insurrection among member co-ops seeking better access to renewable energy, more affordable rates, and more say in how they buy or produce power. 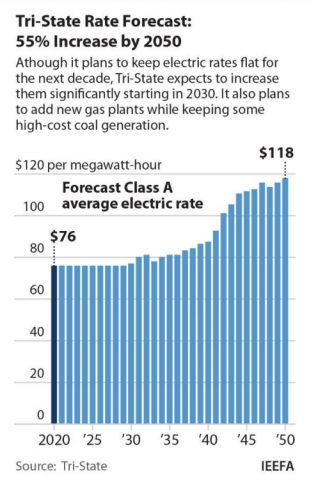 The wholesaler, Westminster, Colorado-based TriState Generation and Transmission Association, also has angered and alienated member co-ops with its combative management style. Two coops—Kit Carson Electricity Cooperative in Taos, New Mexico, and Delta-Montrose Electricity Association in Montrose, Colorado—have already paid exit fees collectively of almost $100 million to leave Tri-State. Two others in Colorado—La Plata Electric Association in Durango and United Power in Brighton—are trying to negotiate agreements to procure or generate their own electricity. Others among Tri-State’s 42-member roster of small-town co-ops have also been questioning their ties to Tri-State.

Tri-State has lagged in keeping up with power-generation trends. This despite desires by several of its largest member co-ops to integrate cheaper renewables more rapidly and despite state policies in Colorado and New Mexico that support a faster transition from fossil-fired power. An April 2020 Tri-State filing with the Federal Energy Regulatory Commission (FERC) includes projections that have the company continuing to get 65% of its electricity from coal-fired sources through the early years of the 2020s. Then—even after its coal plants at Craig, Colo., have closed—Tri-State intends to get a combined 25% of its power from Springerville Generation Station Unit 3 in Arizona and Laramie River Station in Wyoming through the 2030s. The FERC filling also has Tri-State expanding its gas-fired power combustion to account for as much as 20% of its power production from 2030- 2040. While some major utilities in the West have set goals of 45% to 50% renewable energy by 2030—and 100% renewables by 2045 or 2050—and are now strategizing exactly how to achieve these goals. Though Tri-State says it plans on getting 50% of its power from renewables by 2024, it has yet to say how it will get there.

Tri-State power is expensive, and tri-state plans to charge even more in the years ahead

While Tri-State has portrayed itself publicly as a company on the vanguard of a fastmoving national transition toward cheaper power, it plans annual rate increases beginning in 2030 that will raise wholesale prices by 55% in the ensuing 20 years, increases brought on in part by debt tied to coal. Tri-State’s $76-per-megawatt hour (MWh) cost to members, which already exceeds market norms, will hit $118 per MWh by 2050. A good part of the increase Tri-State envisions will come from its debt-laden ties to coal and expansion into gas, but in comparison, costs across the industry are actually falling with the rise and expansion of zero-fuel-expense power generation.

Tri-State has aggressively tried to protect its primacy over members through proceedings at the Colorado Public Utilities Commission (PUC), FERC, and Colorado state courts. In doing so, it has infuriated some member co-ops. Tri-State has recently adopted a strategy of “regulator shopping,” seeking to bypass state rules by taking legally questionable steps to qualify for federal regulatory oversight. Members see it as a betrayal of local values and are now asking about the true purpose of Tri-State, why its executives are paid so much, and who exactly gains when Tri-State clings to an outdated model of high-priced power generation.

Tri-State is risking its survival as a regional power generator

Tri-State’s business model is so outdated that it could drive the association out of power generation entirely, leaving it with the sole task of providing transmission of electricity.