In Lawsuit Over Prairie State Energy Campus, What’s Happening in Missouri Might Not Stay in Missouri 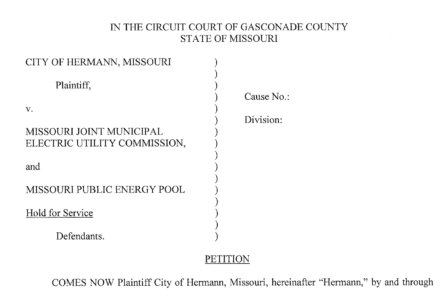 Wall Street voices, Missouri politicians and Peabody Energy have decreed that the city of Hermann, Mo., must remain tangled in the multiple-municipality financial quagmire created by the struggling Prairie State Energy Campus.

Hermann, which touts itself proudly as “the most beautiful town in Missouri,” is no pushover, though, and has responded by saying “not so fast big guys” in a hard-hitting lawsuit that has implications beyond Hermann.

Hermann wants out of its long-term, high-priced electricity contract with the Missouri Joint Municipal Electric Utility Commission, MJMEUC, which is part owner of Prairie State. What should have a been routine matter—Hermann owns a 2.5 percent stake in MJMEUC, a share that could easily have been redistributed back through other MJMEUC members—has now turned into a potential flashpoint that could help scores of communities elsewhere that have been damaged by their ties to the overpriced, poor-performing plant.

The Hermann case, filed last week, goes to the core of what’s wrong with the financing behind Prairie State, a coal-fired plant in Illinois whose tentacles reach into eight states and whose construction was orchestrated by Missouri-based Peabody.

This lawsuit raises more red flags than a NASCAR pileup:

So the city is asking for remedies:

Every community in the Prairie State portfolio—and there are more than 200 of them—was told that if the deal did not work out they could opt out.

The lawsuit unfortunately represents both a breakdown in business relationships and a failure of political leadership. State officials are aware of Prairie State but remain silent, although MJMEUC is a creature of state government and state politics. Allowing this bad deal to stand is quite arbitrary and quite wrong. One historic point along these lines: In 2013, the town of Marceline, Mo., amicably exited MJMEUC, a move that Fitch Rating Services said was positive for MJMEUC’s credit rating. Why MJMEUC would not settle with Hermann is peculiar.

The suit raises even larger issues:

It’s also of considerable note that many communities today are drastically overleveraged because of Prairie State. The economic and fiscal decay from too much local government debt occurs slowly—layoffs of city employees in seemingly unrelated budget moves, electricity-rate increases at a time when electricity prices are dropping nationally, the draining of local government reserves built up over years, increases in sales and property taxes, and businesses quietly closing their doors.

Missouri state finance officials, if any are awake, would do well to take note.

Who’s litigating this case also matters. Curtis, Heintz, Garrett and O’Keefe of Clayton, Mo., is a prestigious firm with deep regional roots that does top-notch work and is run by well-schooled members of the Missouri Bar. They understand utility law and state and local government finance. They are formidable and quite well equipped to take this case to the mat.