India should invest in developing green hydrogen for fertiliser production instead of grey hydrogen (hydrogen extracted from natural gas).

A shift to green hydrogen for fertiliser production would reduce dependence on expensive imported LNG.

India is ramping up urea production capacity to be self-reliant in fertiliser production by next year and to accomplish the government’s Aatmanirbhar mission. A revival plan for five closed fertiliser plants, with an investment of Rs40,000 crore (US$5.4 billion), is on track with an anticipated annual addition of 6.3 million tonnes (MT).

Investment should focus on decarbonising urea production and lowering natural gas use by shifting to green hydrogen instead of the present technique of using grey hydrogen (hydrogen extracted from natural gas). This would be critical to reducing import dependency and promoting self-sufficiency.

Chemical fertilisers used in India can be classified as either nitrogenous or phosphatic & potash (P&K) fertilisers. Urea is the major nitrogenous fertiliser. P&K fertilisers include di-ammonium phosphate (DAP), murate of potash (MOP) and a combination of nitrogen, phosphorus, potassium and sulphur (NPKS).

Historical use and subsidy policies have tilted the balance hugely towards nitrogenous urea, even though there is a recommended ratio of nitrogen, phosphorus and potassium (N:P:K) of 4:2:1 for Indian soil conditions. The ratio was close to ideal in FY2009/10 but the introduction of Nutrient Based Subsidy (NBS) regime for P&K fertilisers in 2010 and the resultant removal of price controls led to a rapid increase in prices of non-urea fertilisers, making urea the preferred fertiliser. The average split in consumption between urea and P&K fertilisers is 60:40. In FY2020-21, urea accounted for 58% of the total fertiliser consumption in India, the balance being NPK fertilisers (refer Figure 1). 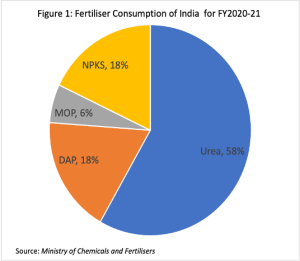 Gas is a critical feedstock and fuel for urea production and accounts for almost 70-80% of the cost of production, depending on feedstock prices and the energy efficiency of production plants. Dwindling domestic gas production has resulted in a rapid increase in use of imported liquefied natural gas (LNG) – in the form of Regasified LNG (R-LNG) – in the fertiliser sector in India. In FY2020/21, R-LNG accounted for 63% of the total gas consumption in the fertiliser sector. As shown in Figure 2, the incremental consumption of gas in the sector has been from imported LNG, which has reached new price levels in the past year, making it a very expensive input.

This increased dependence on expensive LNG for urea production has resulted in increased fertiliser subsidies, which in FY2022/23 will exceed a trillion rupees for the third consecutive year. 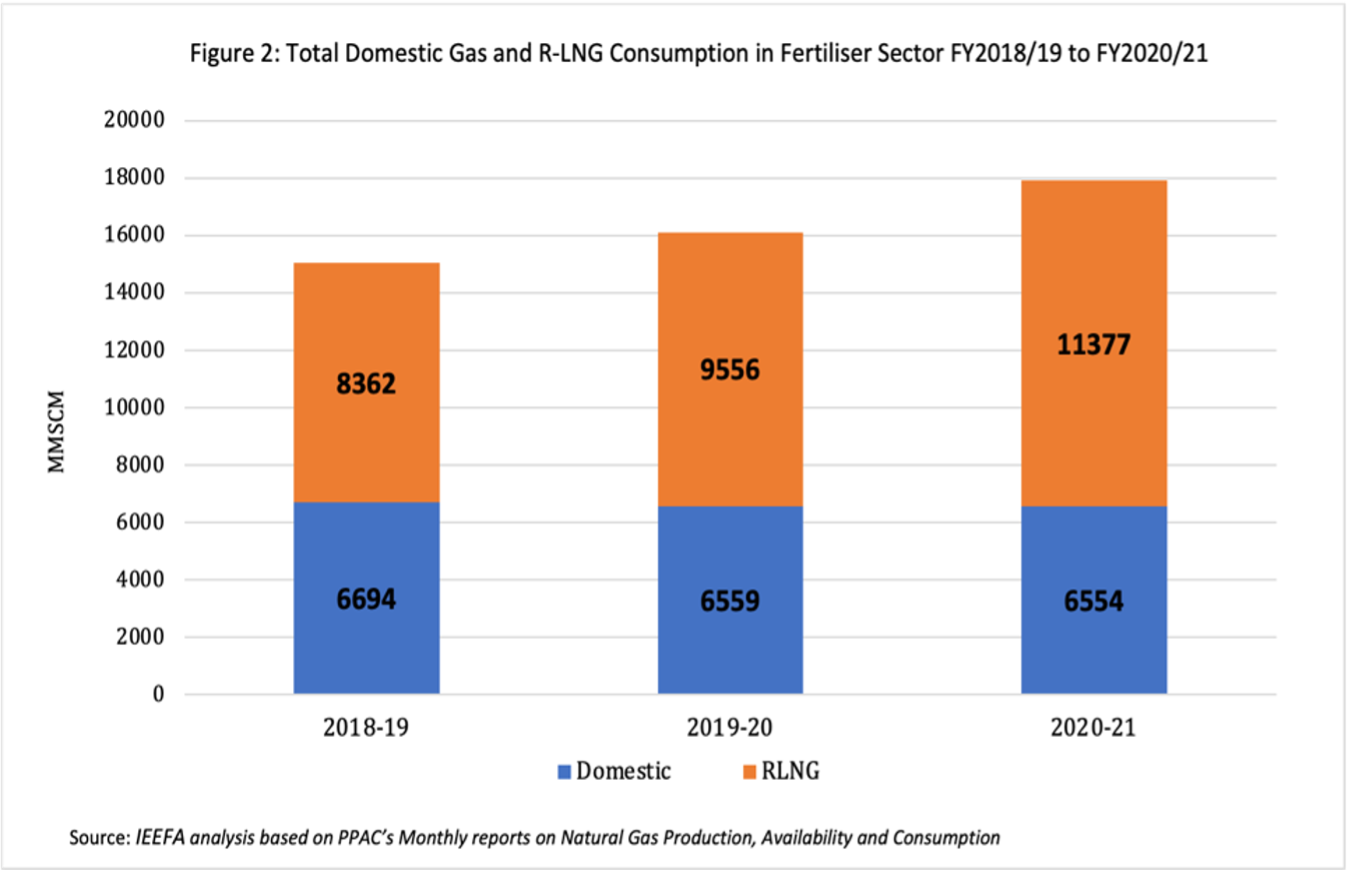 Imports account for about 33% of India’s total urea consumption. Between April 2021 and January 2022, India imported about 7.2MT of urea, adding to the national production of 21MT. The proposed revival of fertiliser plants with the expected annual urea production of 6.3MT could possibly make up for these urea imports but the question arises: does India have the key raw material available domestically?

Adding new urea plants would have worked as an excellent strategy if India had enough relatively cheaper domestic gas to feed the proposed urea units. The total gas consumption of the 30 gas-based urea plants was 17,931 MMSCM (million metric standard cubic meters) in FY2020/21. Of this, domestic gas supplied 6554 MMSCM or 27% of total consumption – competing sectors with no subsidy provision such as CGD and power also require domestic gas for viable operation.

The trend for the past few years is that the incremental gas supply for urea plants is met by imported LNG. Clearly, building new urea plants or reviving old ones at a cost of almost US$5.4 billion does not make India completely self-sufficient in urea production. In fact, it increases our dependence on an expensive, imported fossil fuel characterised by immense price volatility and shortages in the past few months.

There has been increase in domestic production of gas with some recent discoveries in the Krishna Godavari (KG) basin. For FY2023/24, the domestic gas production target has been set at 50 billion cubic meters (bcm), the equivalent of 50,000 MMSCM. This will be difficult to achieve, requiring a huge jump in production – the figure for FY2021/22 was 29.5bcm. However, even if the production target is met, there would be the abiding challenge of sectors competing for the limited domestic gas resource. After the recent 11th round of city gas distribution (CGD) bidding, the total compressed natural gas (CNG) and piped natural gas (PNG) coverage is expected to reach 70% of the population, which would be allocated the major portion of domestic gas. Further, India’s 450 gigawatts (GW) of renewable energy target by 2030 will need operational gas power plants for peaking power requirements, unless large-scale battery storage experiences rapid upscaling.

Instead of investing limited fiscal resources in reviving closed plants and increasing natural gas imports and subsidies, India will achieve a better return by educating farmers on efficient urea use, promoting organic farming and investing in green hydrogen technology for ammonia.

Ammonia is the main intermediary for nitrogen in all nitrogen-based fertilisers. At present hydrogen is extracted from natural gas (grey hydrogen) for conversion to ammonia and urea, making it a very carbon-intensive process. Decarbonising the ammonia and urea processes would require production of hydrogen via electrolysis of water using clean sources of energy.

Fertiliser manufacturing and refineries consume 98% of India’s grey hydrogen, so these hard-to-abate sectors are primed for green hydrogen. India should invest in the latter instead of reviving closed units. 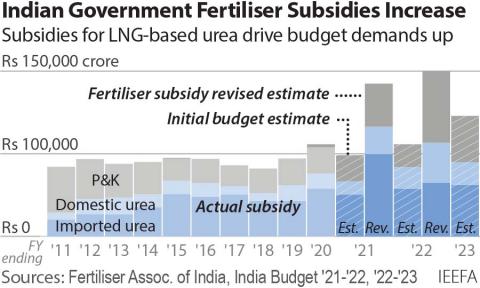 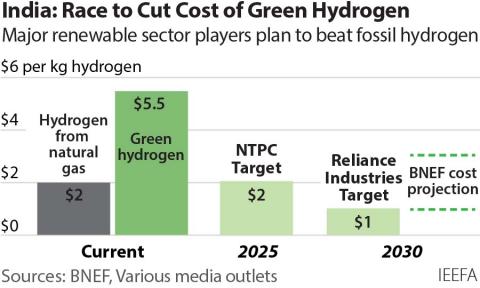 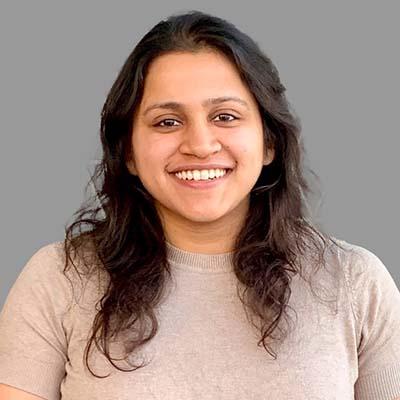 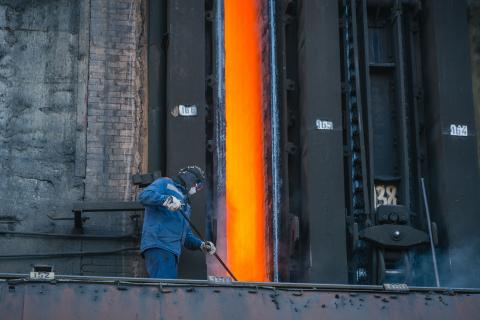