Inaction is Blackrock’s biggest risk during the energy transition

The sheer size of the investments it manages, and the influence it subsequently wields, have led to BlackRock being dubbed the world’s largest shadow bank.

IEEFA notes BlackRock has the capacity to play a powerful leadership role in the current investment discussion over the direction of fossil fuel investing.

Despite the recognition of physical climate risk from this highly risk-focused firm, and acknowledging the insuffiicent in U.S. government policies and mispricing by global financial markets, leadership has not prevailed. BlackRock remains highly exposed and in IEEFA’s view largely unprepared for climate-related investment risk.

BlackRock, the world's largest fund managing US$6.5 trillion, has lost investors over US$90 billion in value destruction and opportunity cost in just a few select holdings over the past decade, due largely to ignoring global climate risk.

A detailed review of BlackRock’s policies and disclosures makes clear that the largest investor in the world’s action on climate risk does not match its rhetoric.

For all the opportunities BlackRock has had to demonstrate global leadership, the firm appears to only just be beginning to embark on an evaluation of the issues surrounding sustainable investing and climate risk.

The Bank of England, the Intergovernmental Panel on Climate Change (IPCC) and others have repeatedly highlighted the growing magnitude of climate risks to financial markets, including in April 2019 estimating stranded asset losses at over US$20 trillion globally by 2050. A back-testing of financial markets conducted today cannot delineate the scope of the approaching-but-yet-to-be-realized investor wealth risks gradually being identified.

This report has identified US$90 billion in value destruction and opportunity cost for BlackRock investors over the last decade in a select group of fossil fuel-heavy investments. Should the Bank of England’s analysis be correct, this represents just the tip of the iceberg.

BlackRock’s myopic management of its fossil fuel holdings, as part of its $6.5 trillion global portfolio, drags down investor returns. In holding after holding across the coal, oil and gas space around the world, weak performance over the last decade lags the market and weakens both actively and passively managed investments.

Most recently, the failure of BlackRock to clearly and systematically address the problems of value destruction in the fossil fuel sector has lost the investment house US$19bn in just over three years in one holding alone—General Electric.

Any reasonable assessment of stranded asset risks relating to climate change would recognize that coal and gas turbine demand has been clearly impacted by a global pivot towards renewable energy.

Rather than identifying and managing this risk, GE doubled down on thermal power in 2015 with its acquisition of Alstom and then again with Baker Hughes in oil and gas. Since then, GE’s market capitalization has declined by over US$150bn (-67%). 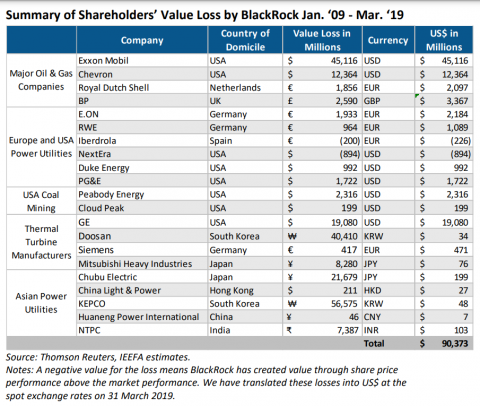 As GE’s biggest shareholder, BlackRock investors have shouldered a disproportionate share of this wealth destruction.

In January 2019, the giant Californian utility Pacific Gas & Electric (PG&E) filed for bankruptcy due to well over $20bn in potential liabilities associated with recent wildfires— what the Wall Street Journal called “The first climate-change bankruptcy.” In 2018, BlackRock owned 5% of PG&E.

BlackRock makes public statements about how capitalism needs to change to deal with climate change, yet at the same time, the firm has become the world’s largest passive investor in fossil fuels.

A 2019 survey of 127 pension plans with €2.2tn in assets under management by Create Research found that more than one-quarter (27%) of those surveyed said index managers were not meeting their stewardship goals at all, while 23% said they were only meeting them to a limited extent. The report concludes “passive funds should not mean passive owners.”

An increasing number of Blackrock’s Key clients are noting this failure of stewardship across passive investing.

A simple move to adopt even a slightly lower carbon intensity index benchmark as the default option for investors in global exchange-traded funds could have profound implications for the market and the flow of global capital.

BlackRock has steered away from the world-leading climate strategies of Divest-Invest taken up by the likes of the Norwegian Sovereign Wealth Fund (SWF), the New York State Common Retirement Fund, Local Government Super of Australia, AP4 of Sweden, and Legal & General Investment Management U.K. (refer Section 6).

Instead, BlackRock has opted for an engagement strategy with the aim of changing the corporate behavior of companies.

IEEFA notes it is entirely questionable whether Blackrock’s engagement activities are achieving material results, particularly given that the firm does not provide full disclosure or evaluation of its company engagement actions.

Clearly, engagement with firms like General Electric, ExxonMobil and Chevron have not aligned with BlackRock’s climate strategy nor its fiduciary duty to protect investor capital. As the Government Pension Fund of Norway notes, effective engagement requires consequences for non-compliance with investor directives.

Nor has BlackRock shown leadership in spearheading investor moves to get major companies to align with the Paris Agreement.

Even though the International Energy Agency has repeatedly warned that the world is on the wrong trajectory to deliver on the Paris Agreement, BlackRock is one of the largest funds most likely to align itself with fossil fuel boards and their entirely inadequate sustainability plans.

In April 2019, BlackRock published a report entitled “Getting Physical,” an analysis for the assessment of climate-related risk. Accepting that climate, as well as societies and technology are all changing, the report notes that the consequences of such change brings both risks and opportunities for investors. The report authors highlight a key conclusion:

“Our early work already strengthens our conviction that sustainable investing is increasingly a ‘why not?’ proposition.”

IEEFA concurs, and asks: why is BlackRock talking the talk, but has yet to walk the walk?

BlackRock plays a powerful leadership role in the current global investment debate over the direction of fossil fuel investing, but the direction it is largely offering is backward. The company stands exposed as its investments are blind to mounting losses, its engagement strategies timid and ineffective and its board conflicted. A new path is needed that leads the company, its clients and the global economy toward climate health and a new cycle of profitability and growth.

Press release: Coal plants in the PJM region are a losing bet for private equity investors