A report that came out last month from the nonpartisan Government Accountability Office recommends that Congress eliminate the risky system of self-bonding by coal-mining companies. But the report also raises concerns about the financial stability of surety-bond companies, a much more common form of reclamation bonding, as well as problems with underfunding for mine cleanup costs.

The report concludes that self bonding, which allows miners to promise they will pay for cleanup of mine sites rather than buying surety bonds or putting up collateral or against reclamation responsibilities, poses too much of a potential burden to taxpayers.

Part of the problem is that the increasingly complex corporate structures of mining companies makes it difficult to assess their true health.

The risk to taxpayers stems from the fact that once companies get into financial trouble and become unable (or unwilling) to live up to their self-bonding commitments, it can be very difficult for them to obtain replacement bonding.

The report also explains how federal and state taxpayers alike are exposed to unanticipated reclamation costs that could arise from underfunded bonding, especially as it relates to water pollution. 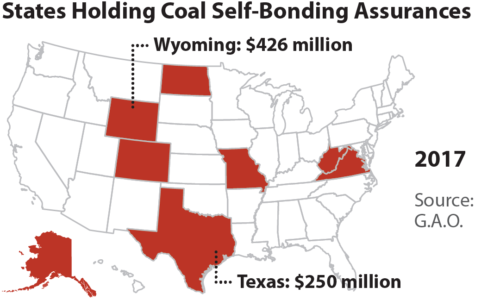 Four of the eight states that currently have outstanding self-bonded assurances have very high levels of exposure to the practice. More than 60 percent of all coal bonding in Missouri, North Dakota and Alaska is through self-bonding, and nearly 50 percent in Colorado. In three of the eight states, the dollar value of self-bonding exceeds $200 million: Wyoming’s total is $426 million, while Texas and North Dakota both have self-bonding levels over $200 million.

Nationally, coal industry self-bonding amounts to $1.2 billion, about 12 percent of all reclamation assurances.

YET THE RISKS RUN DEEPER THAN THE SELF-BONDING question alone. The great majority of coal reclamation assurances nationally are backed by surety companies that guarantee 76 percent, or $8 billion, of all coal mine reclamation in the U.S.

The GAO report points out, though, that the ability of surety-bond companies to live up to their obligations is potentially suspect, and states, tribes and the federal government would do well to take notice. Otherwise, taxpayers may be left to foot the bill. The GAO report raises questions as to whether surety companies have sufficient financial stability to meet their obligations, especially in the event of a sharper downtown. 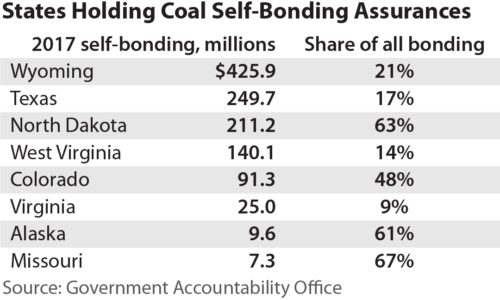 GAO investigators found that more than 450 reclamation assurances were forfeited from July 2007 to June 2016, and nearly a quarter of those failed to cover the cleanup costs; 13 of 25 coal-mining states reported at least one forfeiture.

As utilities continue to eliminate coal from their generation mixes, turning instead to cheaper natural gas and renewables, the financial condition of many coal companies is likely to worsen.

Just this month, auditors for Westmoreland Coal—the tenth-largest U.S. coal company by volume—revealed in the company’s year-end financial statement “that substantial doubt exists as to [Westmoreland’s] ability to continue as a ‘going concern.’”

OTHER COAL COMPANIES, TOO, MAY SOON BE facing similar challenges following the bankruptcy of FirstEnergy Solutions, which owns two big coal plants in Ohio and is looking to void long-term power-purchase agreements with several other coal plants. Murray Energy, the fourth-largest coal company in the U.S., counts FirstEnergy among its biggest customers, having sold more than 3 million tons of coal to FirstEnergy’s Bruce Mansfield plant in 2017 and nearly 2 million tons to its W.H. Sammis plant.

And it has been barely two years since three of the largest U.S. coal companies filed for bankruptcy within months of each other—Alpha Natural Resources, Arch Coal and Peabody Energy.

All these problems are a stark reminder that the coal-mining industry is still fraught with risk, and that those risks are not going away anytime soon. The GAO report highlights the need for greater scrutiny of not just the financial health of coal-mining companies and their ability to self-bond, but of the looming obligations reclamation-insurance companies as well.

Taxpayers deserve better oversight so that they aren’t stuck with coal’s cleanup costs.

IEEFA Update: An Effort in Congress to Bail Out the U.S. Coal Industry at Taxpayers’ Expense