IEEFA update: Federal lending to the oil and gas sector would be a complete waste of money

The federal government recently decided to provide cash to businesses that have been harmed by the coronavirus pandemic. The cash is designed to help businesses survive what is expected to be a short-term economic disruption. The oil and gas industry is also being considered for support. The industry, however, does not only face a short-term cash crunch. It faces an impending train wreck. 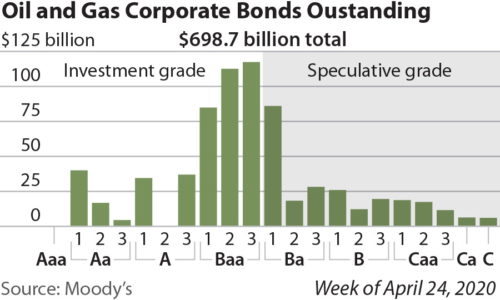 In financial jargon, the federal money is for companies with short-term liquidity problems, but the oil and gas industry faces long-term solvency issues. For those with immediate problems, the money can serve as a bridge back to normalcy; for the oil and gas sector, it is a waste of taxpayer money. If the money were to be channeled exclusively to this sector, the net result would still be an oil and gas industry that is oversupplying the market, pummeled by low prices, and sitting in last place on the stock market.

The oil and gas sector holds $744 billion in outstanding bonds and debt (out of the $7.9 trillion in total corporate debt) and has been the subject of special pleadings by the White House. Almost 83% of the industry’s debt could be eligible for refinancing under the federal program; a recent letter from several senators from oil-producing states asked that high-risk debt in the sector also be eligible for refinancing. Even the strongest parts of the industry, the oil majors, have not escaped fallout from the virus, a triggering event that has brought the last ten years of poor financial performance into stark relief.

PRIOR TO THE CORONAVIRUS OUTBREAK, THE OIL AND GAS SECTOR HAD LONG BEEN IN FINANCIAL DISTRESS. The Wall Street Journal reported in 2015, 2016, 2017, 2018 and 2019, on the trend of low oil and gas prices driven by oversupply. There are too many companies and countries, producing too much oil and gas, at low prices and profits and for a slower-growing economy. Long-term low oil and gas prices brought on by a worldwide oversupply threatens the industry’s financial solvency.

Most of the exploration and production sector is overleveraged and facing a spate of bankruptcies. Upcoming debt maturities are an ever-present reminder of this unsustainable business model. The pipeline sector is overbuilt. Weak economic demand cannot turn low feedstock costs for petrochemicals and plastics into a new growth story.

INVESTORS ARE DISSATISFIED WITH THE OIL AND GAS SECTOR. For most of the last decade, the industry was in last place in the stock market. The sector holds only 2.6% of the Standard & Poor’s Index, whereas it once dominated the market with 28% in the 1980s. ExxonMobil, the industry leader, was once worth $500 billion in market capitalization. The company hit a low of $139 billion on March 16, 2020. These facts have not quite penetrated the consciousness of the money managers, investment bankers and Washington policy makers who have continued until now to keep the sinking ship afloat.

The CARES Act was not designed to save an insolvent industry

The CARES Act provides liquidity to companies that would be going concerns if it weren’t for the pandemic. At the onset of the outbreak, 52% of all oil and gas debt was either below investment grade or very close to it. The federal program is designed to rescue, for example, a small restaurant where patrons would like nothing better than to flock back to a friendly place to enjoy a good meal in the company of friends. Federal support keeps the labor force together during hard times and makes it easier to reassemble the team quickly as the pandemic subsides. On a larger scale, such government support is expected to safeguard key industries, like airlines, where the customer base is also expected to return as the economy starts to grow.

The CARES Act was not designed to save an insolvent industry suffering from deep structural problems. Direct cash to oil and gas companies may buy them some more time, but the time will be spent drilling more oil and gas for an oversupplied market that has not produced profits for most of the last ten years. Unlike restaurants and airlines, where there is a strong likelihood that a decent customer base awaits, the oil and gas sector faces an increasingly unstable future.

The federal government’s efforts should be focused on sectors where workers and businesses will actually benefit from public investments. For the taxpayer, money to the oil and gas sector is a waste.

IEEFA update: Loan program for coronavirus-impacted businesses excludes oil and gas companies. Or does it?