IEEFA Update: In Federal Coal-Policy Reversals, Trump Is Handing Out Snowballs in a Blizzard

Its reversal earlier this year of a moratorium on federal coal leases put into place last fall by President Obama got the Trump administration lots of applause from the industry.

It got more this week for rescinding a rule that came onto the books several months ago in a federal policy change meant to end huge longstanding handouts to coal companies (for more on how that practice benefited the coal industry to the tune of billions of dollars see our report from a while back “The Great Giveaway: An analysis of The United States’ Long-Term Trend of Selling Federally Owned Coal for Less Than Fair Market Value”).

While coal lobbyists cheer these policy reversals in public they most know they mean next to nothing.

Coal production in the U.S. is declining (see our recent entry on that, “The Coal ‘Comeback’ of 2017”), and it’s because of a demand problem, not a supply problem. The jury is still out on how much further it will decline and how fast, but even the most generous outlooks see a 30 percent drop from the peak production levels of a decade ago.

Most coal companies acknowledge declines in domestic markets, but producers in the Powder River Basin of Montana and Wyoming have emphasized how they serve export markets to Asia too. This is something of a misleading narrative, however. A 2014 General Accounting Office audit found that only about 2 percent of Powder River Basin coal ever made its way to foreign markets. The lion’s share of U.S. exports come from mines in Northern and Central Appalachia, and the vast portion of the market for U.S. coal is domestic.

BY WAY OF EXAMPLE ON THE POWDER RIVER BASIN, WHICH IS THE SINGLE BIGGEST AMERICAN COAL RESERVE, Cloud Peak Energy says it is bullish on export sales but its overseas operation continues to lose money. The core problem with export markets is that they are in structural decline, and many coal-producing companies seem to know it. Signal Peak, an export-dependent Montana mine owned by FirstEnergy and the Gunvor Group, has seen its value written down to zero.

The Bureau of Land Management some years ago noted astutely that “companies generally have a good understanding of the coal market, and if they are willing to pay the fair market value for a tract, then they are demonstrating the demand for coal.”

This principal can be seen at work today.

Since the decision by the Trump administration to lift the moratorium, two companies, Contura Energy and Kiewit, have withdrawn lease applications for access to almost 420 million tons of Powder River Basin coal. Likewise, Cloud Peak and Arch Coal have delayed their applications for lease on an additional 420 million tons. The BLM notes the delays have been requested due to the poor economic condition of the coal industry. The companies are holding off, frankly, because they see no value in more leases. 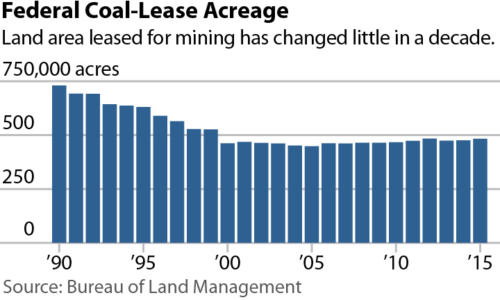 A LONGER-TERM LOOK BACK AT THE TREND IN FEDERAL COAL LEASES IS TELLING AS WELL: It has been flat for well over a decade.

Powder River Basin coal will not fetch much of a price in this market, and companies that really want to press lease applications there are only speculating. Federal law prohibits government from supporting coal company speculation.

The reluctance among most producers to move forward on new leases is a clear indication that indeed they do understand market conditions. We see no demand for Powder River Basin coal either, and from our point of view it looks like the Trump administration in its policy reversals is handing out snowballs in a blizzard.

What, if any, benefit has been gained by coal companies remains to be seen.