June 7, 2019 (LONDON) – Paris-based Credit Agricole has become one of the first banks to join a growing investor coalition demanding that electric utilities exit coal generation by 2030, underscoring the urgency for strategic change at major energy companies across Europe and other OECD countries.

Credit Agricole Group includes banking and asset management activities, such as Amundi, which has €1.4 trillion assets under management. In setting out its new “medium-term plan” on Thursday, the Group committed to excluding utilities that continued to burn coal after 2030 in OECD countries.

“(We) commit all the Group’s entities to a common climate strategy…exiting from thermal coal production in EU and OECD countries by 2030,” the bank said in a statement on its website.

CREDIT AGRICOLE, WITH $11.5 TRILLION IN ASSETS UNDER MANAGEMENT, HAS NOW JOINED INVESTORS DEMANDING THE SAME COAL EXIT deadline in a letter to the Financial Times last December.

Taking these in turn, in its latest “Factbook,” published March 2019, RWE still forecasts a lignite mining end date in Germany of “mid-century,” notwithstanding a German government-appointed panel earlier this year recommending a coal and lignite phaseout date of 2038. RWE has demanded compensation if the 2038 end date is enforced.

Uniper has written down its Dutch coal asset by €1.1 billion

Uniper is the only utility still building new coal power plants in western Europe, preparing to bring online its new 1,055MW Datteln 4 coal plant due 2020, even as the German government prepares to implement a coal phaseout. That plan is ominously similar to the utility’s decision to open its Maasvlakte 3 coal plant in the Netherlands in 2015, just before the Dutch government committed to a 2030 phaseout. IEEFA estimates that Uniper to date has written down its Dutch asset by around €1.1 billion, or more than half its original value, since commissioning the plant four years ago.

Czech-based CEZ plans to cut installed coal capacity almost in half by 2025, to 3.9 gigawatts, but has only committed to zero-carbon generation by 2050.

Enel’s Spanish subsidiary, Endesa, is investing to extend the life of at least two of its coal power plants, AS Pontes and Litoral, but has said these have a very limited future beyond 2030.

Poland’s biggest utility, PGE, has invested heavily in coal generation, to buy coal plants, build new ones, and extend the life of those it already operates. PGE appears seriously out of step with international trends on exiting coal and taking climate action—unsurprising given one of its three strategic options assumes “that climate policy is substantially relaxed,” going forward. Under that strategy, PGE has been working for more than a decade to gain concessions to continue the company’s lignite mining well into the middle of the century, after its present Szczercow mine has closed in 2037, and its Turow mine in 2045.

THESE FIVE EUROPEAN UTILITIES: PGE, CEZ, RWE, UNIPER, AND ENDESA, MAY BE FORCED TO REVISE THEIR COAL DEVELOPMENT PLANS, as the finance community continues to pile on the pressure to shift to urgently needed low-carbon alternatives. 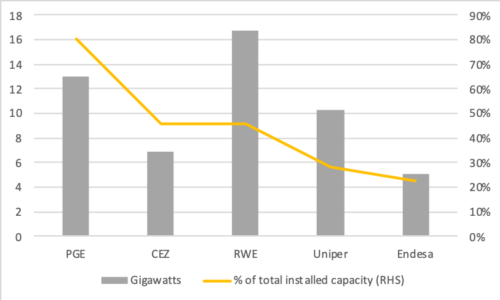