Preparations to float Dalrymple Bay Coal Terminal (DBCT) on the Australian Stock Exchange appear to be heating up, with a potential listing date slated for the fourth quarter of this year.

EAGER TO DISPOSE OF THE ASSET, DBCT management are reported as having restarted the float process, courting retail brokers last week. DBCT will be repackaged as ‘Dalrymple Bay Infrastructure’ (‘coal terminal’ is presumably less palatable branding) and pitched (optimistically) as an asset with 7% potential running yield (with no commitment of a return of capital).

While Dalrymple benefits from a fixed regulated revenue stream provided by the take-or-pay contracts in place with its customers, the potential for a 7% yield appears to be ostensibly unachievable. Take-or-pay contracts with customers are usually long-term for 5 to 10 years, with customers obligated to pay a fixed amount for the term of the contract. The prices Dalrymple may charge customers are fixed annually by its regulator, the Queensland Competition Authority (QCA). Dalrymple’s revenue is therefore capped, with no growth potential under current levels of carrying capacity.

Initial market estimates had speculatively valued Dalrymple equity at approximately A$2–A$2.5 billion. Cash on hand as of March 2020 was A$26 million and undrawn facilities at A$99 million.[1] Projected Cashflow for 2020 was A$120 million which, according to Moody’s, would be sufficient to cover the company’s short-term operating cash needs. In the absence of any plans for expansion (which would require additional debt financing), operating cashflow under the current regulation regime will be stable for the next 5 to 10 years. An operating cashflow covered 7% untaxed investment yield on a company with an estimated A$2 billion market capitalization would clearly therefore not be achievable.

In the current market environment, even companies with promising growth potential and strong balance sheets have suspended or significantly cut dividends.

IN ADDITION TO MARKET CONCERNS AND CASH FLOW CONSTRAINTS, Dalrymple is highly levered operationally and financially, and may struggle to maintain its initial investment yield. Estimates by Moody’s suggest the terminal’s current debt burden would require 12 years to be fully repaid. This is, of course, assuming that all cash flows were applied to debt repayments (resulting in 0% investment yield).

Dalrymple’s debt obligations are sizable over the next five years (see Table 1). Total debt maturing through 2026 exceeds A$2bn, with A$580m falling due next calendar year.

Table 1: DBCT’s Debt Obligations Are Sizeable Over the Next Five Years ($AUD millions) 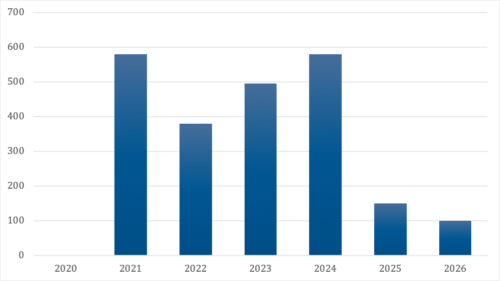 In September 2020, Dalrymple attempted to refinance its loans falling due in 2021 in the local market. The bond issue failed. On the second attempt, the company had to resort to overseas markets, ultimately raising the funds in a secretive U.S. private placement deal.[2]

THE QUEENSLAND GOVERNMENT’S OWN COAL FORECASTS further highlight dwindling demand for metallurgical exports, underpinned by more recycling from scrap metals and China’s reduced requirements for steel. ‘The study of long-term global coal demand’ published by the Queensland Treasury[3] estimates global demand for Queensland coking coal imports could almost halve by 2040. The report predates China’s October 2020 announcement that it would commit to net-zero emissions by 2060, a move which could imply a dramatic reduction in China’s use of iron ore and the coking coal required to process it into steel. It also pre-dates rumours of a China boycott of Australian thermal and coking coal.

The International Energy Agency’s (IEA) World Energy Outlook 2020 estimates that global coking coal production and consumption will decline annually by between 1.8% and 3.6% this coming decade, the latter being catastrophic for the industry.[4] This is a critical risk for an asset with a 50 year lease (and 49 year option).

In an attempt to increase the profitability of the terminal in 2019, DBCT appealed to the QCA to remove all pricing tariffs and allow the company to negotiate the prices it charges freely. In a draft decision, the QCA swiftly rejected the proposal stating that DBCT was a monopoly with excess market power. Hence, DBCT will continue to be regulated by the QCA who will also continue setting pricing tariffs until 2030. A devastating decision for the company, one which will continuously impact Dalrymple’s profitability.

CLASSIFIED AS A MONOPOLY, Dalrymple has little to no potential for growth. Further, burdened by fixed pricing tariffs and increasing refinance risk, the asset is unlikely to generate any investment yield growth, and has a long-term capital risk factor that rises should the world align on lifting its Paris Agreement ambition, like China has just pledged.

Betting on a potentially stranded asset is a clear financial risk. Institutional investors have been quick to distance themselves, and now as a last resort, Brookfield is looking to less-well informed Australian retail investors to bail them out of a coal terminal with a heavy debt load.

It will be interesting to see if the new branding does the trick.

Analyst Trista Rose has worked for investment banks in London, New York and Sydney and was part of the proprietary trading team at Macquarie bank. Trista has degrees from the University of Queensland, University of Oxford and is now pursuing a Master’s in Sustainability at University of Sydney.