A commentary that appeared the other day in the Bond Buyer, the debt industry’s newspaper of record, is but the latest salvo in Wall Street’s misguided war on Puerto Rico.

The column, by a representative of Spire Wealth Management, complained strenuously that Puerto Rico was only hurting itself by pressing for much-needed debt relief.

Such arguments, which we’ve heard before—in bond insurers’ campaign to avoid paying claims, in op-eds that argue for investor class protection in the wake of Hurricane Maria, and in pushback from hedge fund billionaires—are shamelessly self-serving and hardly in the best interest of Puerto Rico.

Puerto Rico bond prices, as the chart here shows, have been worth far less than their face value for several years running now as the commonwealth’s economy has deteriorated. Prices have dropped precipitously this year, following the government’s bankruptcy in May and after Maria dealt the U.S. territory such a crippling blow that much of it is still in darkness. 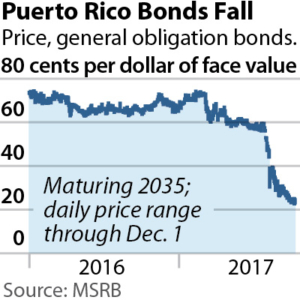 Bondholders are not the innocents they make themselves out to be.

Indeed, many of the investors who continued to lend money to Puerto Rico did so after it was obvious that the commonwealth was in no position to pay it back.

LENDERS KNEW THEIR ABSURDLY HIGH YIELDS DID NOT COME WITHOUT RISK, yet Wall Street continued to hawk Puerto Rico debt in spite of numerous warnings by Moody’s Investors Service and others.

The economy of Puerto Rico simply was not capable of producing enough sales-tax revenue, or any type of revenue, to service its ballooning debt. Had investors bothered to look they would have found that large portions of bond proceeds were going just to pay salaries—a sure sign of distress.

Some bondholders today are wrapping their self-righteousness in the fact that due-diligence teams and the Puerto Rico government itself told them everything was fine. They have a point—and they should pursue that point by suing their advisors for fraud and holding their lawyers accountable for their complicity.

In one of many acts of sheer fiscal irresponsibility, Gov. Ricardo Rosselló earlier this year eliminated a commission to audit Puerto Rico’s debt. That commission in its short life pointed to failures by attorneys, underwriters, fiscal advisors, accountants, credit agencies, government bureaucracies and energy consultants to issue proper warnings to bondholders. Shortly after that report was issued, the Securities and Exchange Commission let on that it was investigating bond issuance by the Puerto Rico Electric Power Authority. The Federal oversight management board that has since stepped in has issued a contract for an investigation of the Puerto Rico debt issuance. Stay tuned.

THERE IS NO HISTORICAL SUPPORT FOR BONDHOLDERS who argue that debt markets will abandon Puerto Rico if the commonwealth insists on debt relief.

Exhibit A is the city of Detroit, which when it reentered the bond market after bankruptcy in 2013, saw demand for its bonds oversubscribed. Detroit’s example shows how when debt is canceled and fiscal controls are established, governments are repositioned to back new loans.

Moody’s, which puts out an annual report on municipal debt defaults, backs up this thesis. The credit rating agency, in chronicling some 70 defaults over the past 30 years, notes that pretty much everyone is still borrowing.

Puerto Rico bondholders would do well take their losses now. The latest Certified Commonwealth Fiscal Plan, dated April 17—five months before Hurricane Maria—allowed for payment of only about 12% of the fiscal 2018 debt service due from the commonwealth and closely related entities. Things have obviously only worsened, and dragging out the debt-repayment argument will only increase volatility, drive prices even lower, impair fiscal solvency and impede Puerto Rico’s recovery.

Such resistance will result in smaller paybacks and more delay on forging the necessary public and private consensus needed to move forward. And putting off the inevitable will benefit nobody but the lawyers, accountants, and financial consultants who signed off on these shabby deals in the first place.

Tom Sanzillo is IEEFA’s director of finance. This commentary first appeared in today’s edition of the Bond Buyer.

IEEFA Puerto Rico: How to Play Hardball With Bondholders