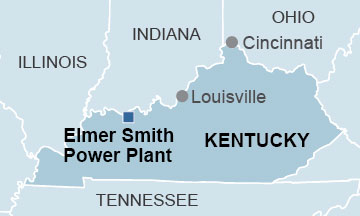 We’ve published a memorandum today explaining why the aging coal-fired Elmer Smith power plant in Owensboro, Ky., must be retired soon and how Owensboro Municipal Utilities would do well to invest in renewable electricity generation instead.

Our memorandum describes how the plant—whose two units date from 1964 and 1974—has become increasingly uneconomic to operate and in all likelihood will continue to be a drain on ratepayers for as long as it remains in operation.

Our findings show that the facility is long past its prime, that it cannot compete with other sources of generation, and that, as a result, ratepayers in Owensboro are needlessly subsidizing a large portion of the cost of the power from Elmer Smith that is being sold to wholesale customers.

While our review was prepared at the request of the Ohio River Valley chapter of the Sierra Club Beyond Coal Campaign, it is a wholly independent analysis of the faltering economics of Elmer Smith. It emphasizes that tens of millions of dollars of new investments will be needed to keep the plant running and, using the utility’s own analyses, shows that retail rates will increase by 20 percent by 2018 and 80 percent by 2025 if both units at Elmer Smith are not retired.

Our recommendations, in addition to timely closure of both units of the plant, include the following:

The Elmer Smith power plant is an example of a dying vestige of the U.S. utility industry—coal-fired generation that is dirty, expensive and no longer viable in the new energy economy.

Emblematic of a Sector in Distress, Homer City Power Station in West Pennsylvania Is on the Ropes