IEEFA India: India’s electricity sector transformation has made progress in 2019/20

India’s electricity sector ambitions have been widely acknowledged as potentially transformational and have put India on the world centre stage in terms of reinvigorating the global drive towards the Paris Agreement.

Prime Minister Narendra Modi has set ambitious, clear, long-term targets. Despite some material near-term headwinds that have developed over 2018/19, the level of ambition has been reinforced, with Power Minister R. K. Singh’s latest announcement being to target of 450 gigawatts (GW) of renewables by 2030, representing a total of 55% of planned capacity.

In this note we examine the progress to-date in 2019/20, particularly in light of the rapid deceleration in economic growth which in turn has reduced near term electricity demand. Conventional power generation (excluding renewables) was down 12.9% year-on-year in October 2019, with this decline continuing in November 2019.

After a decade of GDP growth averaging over 6% annually, India has unexpectedly hit a near-term economic slowdown.

Electricity generation across India, including renewables, grew 6.8% year-on-year in the June 2019 quarter.

Electricity growth slowed to a still robust 5.3% year-on-year in the September 2019 quarter. However, the December 2019 quarter started with a record 12.9% decline in conventional generation in the month of October 2019 (total including renewables is estimated at negative 9.6% year-on-year). This decline has continued in the first three weeks of November, such that year-to-date 2019/20 electricity demand is 5.2% below the Central Electricity Authority (CEA) target. 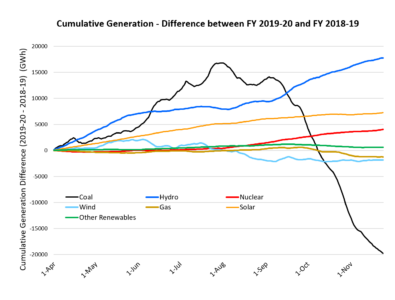 With this being offset by a one-off skyrocketing of hydro-electricity generation (+18,000GWh on strong outputs from the Northern Region across the year, and in the Western Region since the monsoon), total generation is up just 1.9% year-on-year year-to-date (solar and nuclear are both up, wind and gas are marginally down).

To put this in context, Figure 2 provides IEEFA’s estimates of India’s capacity and generation mix by the end of the 2019/20 year, based on electricity production growth lifting marginally in the last four months to average +2.6% year-on-year to 1,415 terawatt hours (TWh) overall.

The financial distress in the thermal power sector is ongoing and proving difficult to solve. In addition to excessive financial leverage and the inflationary impacts of rising coal and rail transportation costs, the coal-fired power plant sector is grappling with utilisation rates 20-25% below design rates.

The sector is not assisted by the downward pressure of deflationary renewable energy tariffs.

Hydro generation is up 18TWh year-to-date (20% generation growth relative to a 1% increase in capacity, showing this is almost all a one-off / seasonal high), putting this sector on track for a capacity utilisation rate approaching 39% relative to the 33% average over the last five years.

Investors continue to pivot away from Indian thermal power generation due to renewable energy being the lowest cost source of new power generation, and the ongoing shortages in cost-effective fossil fuels continuing.

A number of state-centre policy issues and some centre government policy contradictions (e.g. the dilemma of implementing ‘Make in India’ while maximising low cost renewable installation investments) have seen renewable energy installation momentum stall over the last 12-18 months. Over 5GW of tenders have been cancelled and another 6GW of auctions undersubscribed due to insufficient investor interest (mainly due to poor terms and excessively low tariff caps) reflecting a number of policy headwinds.

Despite this, IEEFA would note that 38GW of renewable energy auctions have been completed since June 2017, and another 25GW of tenders have been called. With solar module prices down 15% year-on-year to just US20c/w in 2019 in the Indian market, renewables are set to maintain or expand their cost advantage over expensive, polluting, emissions/water intensive thermal power generation.

Technology developments and economic advantages strongly intertwine with a clear government ambition to put India in a position to transform its electricity sector over the coming decade.

IEEFA expects the renewable sector to rebuild momentum into 2020.