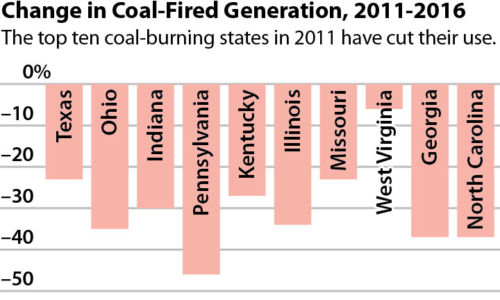 “Anyone who watches the energy markets knows the coal industry is in serious trouble. The political rhetoric around the energy markets is higher than it’s been for years, if not decades. The truth of the matter is that nothing can reverse the market forces that are pushing coal into further decline … there’s really no hope for any kind of long-term reverse of the industry’s decline, no matter what the coal industry or its allies in government would like people to believe.”

That’s the opening of an IEEFA webinar that went up this week on our YouTube channel, one in a series of IEEFA online data-driven presentations.

The speaker on this installment, David Schlissel, our director of resource planning analysis, proceeds from the forcible opening above into a devastating analysis that shows, slide by slide, the electricity-generation transition occurring nationally.

Schlissel emphasizes the market-driven nature of the change, explaining in no uncertain terms how it is creating winners and losers—and how the coal industry is not among the former.

Here are a few of what Schlissel boils down into his “key takeaways”:

Schlissel also emphasizes how the decline of coal is playing out state by state, especially (see slide 8 on the video for a fascinating 20-state breakdown). Colorado and West Virginia are the outliers in this snapshot, reporting coal-usage 2011-1016 declines of “only” 12 percent and 6 percent, respectively. The average decline is 30 percent, however. Eight states have reduced coal usage by 30-39 percent: Arizona, Georgia, Illinois, Indiana, Iowa, Michigan, North Carolina and South Carolina. Three have cut their coal-fired generation by 40 percent or more: Alabama, Oklahoma and Pennsylvania.

The implications are broad. Schlissel notes how coal-industry payrolls in the U.S. peaked long ago, including over 800,000 workers in 1924 before declining steeply and steadily for decades, spiking back up some in the 1970s, and then resuming in a decline the persists to this day—such that fewer than 80,000 people are employed by the U.S. coal industry now (slide 11 in the presentation is a picture worth a thousand words).

There’s more: An array of market forces have taken root, all working against coal. These include low natural gas prices, rising costs associated with coal-plant operations, little or no growth in electricity demand, and growing competition from wind- and solar-power generation. They encompass operations and regulatory costs that rise as coal-fired plants grow old.

Schlissel is blunt in his description of the core implication: “Less generation from coal-fired plants and lower revenues from each megawatt-hour sold.”

He points out, notably, that “industrial and commercial businesses are increasing their use of clean power,” creating private-sector momentum that isn’t likely to be swayed by tweets from the commander in chief. Among the household-name corporations that have adopted 100-percent-renewable-energy strategies: Google, Walmart, Facebook, Mars Inc. and Nestle.

And he notes astutely that the politics of energy favor this trend. Wind is “the newest ‘cash crop’ in the Midwest,” “the wind lobby is strong” and the wind- and solar-generation industries now employ hundreds of thousands of people (that’s slide 45 in the webinar) who will not look kindly on politicians who obstruct their livelihoods.

Meanwhile, the U.S. coal fleet ages on, much of it dating back to when before Richard Nixon was president, and much of it burdened with legacy costs that continue to rise.

IEEFA Texas: The Beginning of the End for Coal-Fired Electricity