As coal dependence falters in the U.S., wind-powered electricity generation is on the rise. In less than a decade, the mix of fuels used for generating electricity has gone a major shift.

The two maps below show where the changes are most marked.

Twelve states, most of them in the wind-rich Great Plains or the upper Midwest, are getting more than 10 percent of their power now from wind, a threshold first passed by Iowa in 2009. Last year, two states—Iowa and South Dakota—generated more than 25 percent of their electricity from wind. On some days in some of the areas highlighted here, almost 50 percent of electricity demand is being met by wind.

This transition has happened quickly. In Texas, for instance, the country’s largest electricity market, wind’s share of generation jumped from 2.4 percent in 2007 to 11 percent last year. 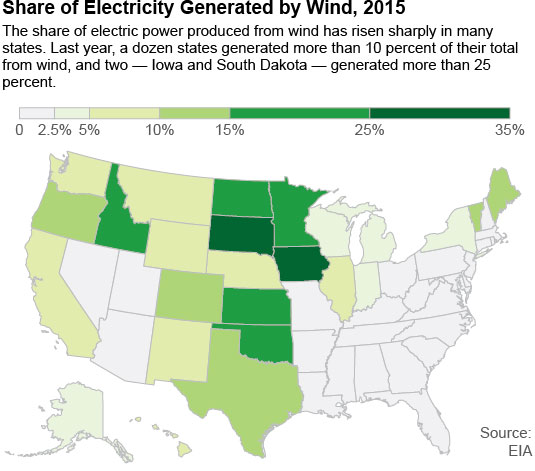 One way to register the rise of wind is by how much more electricity the U.S., as a whole, gets from wind-powered generation than it did just a few years ago. In 2007, according to the Energy Information Administration, the U.S. generated 0.9 percent of its electricity from wind. By last year that number had risen to 4.9 percent (an almost fourfold increase in eight years).

Another side of the energy-transition coin is apparent in the second map here, which shows where coal-fired electricity has suffered its deepest declines. The states that have reduced their coal use the most (measured in millions of tons)—Indiana, Georgia, Ohio and Pennsylvania—have done so largely by turning to natural gas. 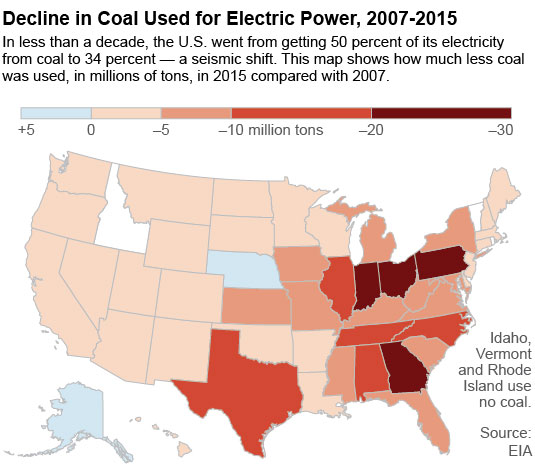 Nearly every state has reduced its dependence on coal-fired electricity generation since 2007. The U.S. today gets only about a third of its power from coal, a 16-percentage point in less than a decade. The chart below shows how this decline is part of a broader diversification in electricity generation. 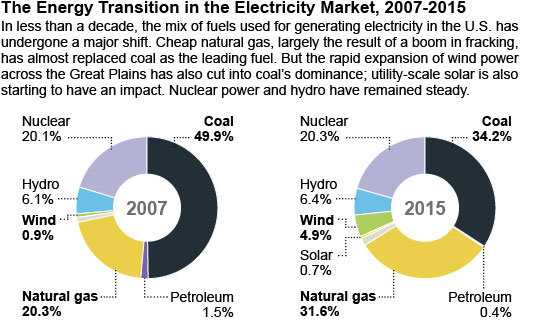 There’s no evidence that these trends are changing, and no wonder the U.S. coal-mining industry has collapsed.