Solar energy is increasingly complementing the rapid deployment of wind and hydro-electricity projects around the world.

Recent improvements in economies of scale, solar-technology breakthroughs and rapid cost deflation all augur for yet another record year in 2016. Together, solar, wind and hydro are accelerating in particular the substitution of thermal power generation by renewable energy alternatives.

As a result, stranded asset risks in coal loom large, real and imminent.

A data point of special note: Global deployment of solar reached a record 50 gigawatts in 2015.

The REN21 global renewables review out this week highlights that number, which brings global installs to a cumulative 227 gigawatts, a 28 percent expansion in the solar base globally in just one year. Figure 1 here shows how China is now the largest solar project operator globally. China installed 15.2 gigawatts in 2015; runner-up Japan added 11 gigawatts.

IEEFA sees China easily exceeding its 2015 record with a target of 20 gigawatts of new solar in 2016. UBS currently has China installing more than 13 gigawatts of solar in the first six months of 2016, ahead of a solar tariff cut effective July 1*. The U.S. is seen doubling annual solar installations in 2016 (GTM forecasts to as much as 16 gigwatts), which would put it in second place globally. 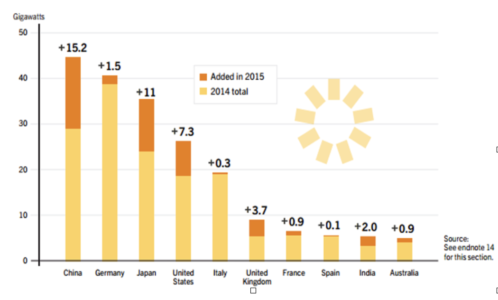 MEANWHILE IN INDIA, ENERGY MINISTER PIYUSH GOYAL JUST THIS WEEK ANNOUNCED THERE IS EVERY CHANCE INDIA
will bring forward its target date for reaching 100 gigawatts of solar installs by 2021-22.  (This even as the International Energy Agency says India won’t achieve that milestone until 2030).

Here’s Goyal on this point: “I think a new coal plant would give you costlier power than a solar plant.”

Goyal specifically targets a tripling to 10.5 gigawatts of solar deployments in the year to March 2017, after a tripling to 3 gigawatts in 2015-16. Energy security, energy independence, domestic power sourcing, zero emissions, zero water and air pollution plus the long-term deflationary nature of solar are all drivers of the Modi government’s strategy. Goyal has also announced India will kick start domestic manufacturing of solar equipment under its “Make in India” program, with the goal of having domestic solar manufacturing costs be the lowest in the world within 18 months, a position already achieved in the EPC (Engineering, Procurement, Construction) of solar projects in India today.

GLOBALLY, THE COST OF SOLAR ELECTRICITY CONTINUES TO DECLINE AT A DOUBLE DIGIT ANNUAL RATE, AND IEEFA SEES THIS TREND CONTINUING through the end of this decade.  The chart here derived from Bloomberg New Energy Finance speaks volumes. 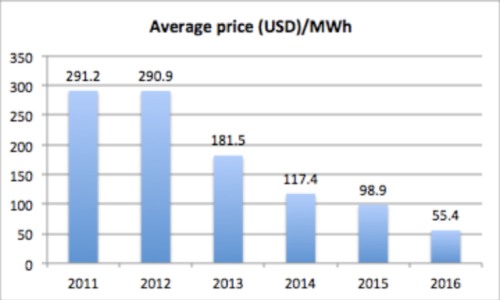 Solar delivered a new record low power purchase agreement of US$30/MWh in Dubai in May 2015, a price drop of almost 50 percent in just 16 months. This record-setting bid came from a consortium made up of Abu Dhabi renewable energy developer Masdar and Spanish developer FRV. It puts solar in Dubai below the cost of any alternative source of electricity and will underpin plans for a rapid deployment across the Middle East.

This month, GTM Research forecast U.S. commercial solar prices dropping by 25 percent between 2015 and 2020 to less than US$1/watt, while the price decline in the U.S. residential segment is seen at 30 percent.

And in May, a new global solar cell efficiency record was set by the University of New South Wales in pushing sunlight-to-electricity conversion efficiency to 34.5 percent, more than 50 percent better than the cell efficiency of solar currently deployed in commercial markets. (This milestone, achieved by Mark Keevers and Martin Green, is of particular note because the latter is the pioneer in the very technologies that are transforming global electricity markets).

Solar electricity generation, to sum up, is set to transform global electricity markets over the next decade. Deployment rates continue to grow at 10-20 percent annually around the world, and the cost of solar electricity continues to decline at double-digit rates every year.

Battery storage commercialization over 2016-2020 will only accelerate the deployment of solar, a trend that Andrew Vessey, the CEO of AGL Energy, best  distilled last month when he said batteries will “change the world“ of energy investments.

In Adani’s New Data, a Shift to Renewables