Wholesale electricity prices are being pushed down by the rise of renewable generation.

The pace of this change has surprised almost everyone, and indeed would have been difficult to imagine just a few years ago.

Crucially, renewables need only capture a relatively small market share for disruption to occur, and to continue. While it may take decades yet for renewables to become the dominant form of generation globally, their presence today is permanent and their advance inevitable.

By way of recent example, in 2016 Germany—the fourth-largest economy globally—saw two of its biggest companies, the power utilities E.ON and RWE, voluntarily break themselves up. Those moves came in response to a transformation that is reshaping the power-generation sector almost everywhere and wreaking havoc among utilities that have arrived late to this conversion. Germany is of special significance since the nation pioneered Energiewende, a policy shift toward a low-carbon economy that is now being adopted globally.

From Europe to Asia, from the Americas to Africa, wholesale electricity prices are being pushed down by the rise of renewable generation, which has no fuel costs and whose developers can now consistently outbid fossil fuel-based generation.

This report documents the gathering momentum of this trend, and how the impact of renewables on electricity prices is a key driver of this change. 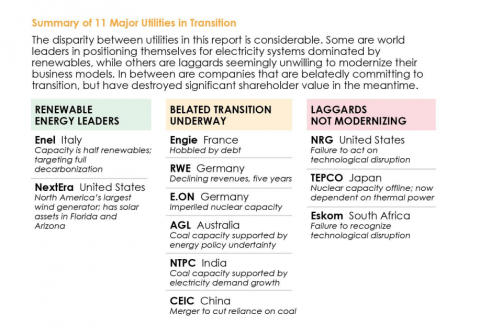 IEEFA is hardly alone in its view of transition. According to Morgan Stanley, for one, wherever utilities compete to sell electricity on an open market, those at the forefront of renewables will see significant upside while the owners of fossil-fuel and nuclear-powered fleets will suffer.

The disparities among utilities in this regard is considerable. Some are world leaders in preparing for electricity systems dominated by renewables, while others are laggards seemingly unwilling to modernize their business models. This picture is further complicated by the presence of companies that are belatedly committing to transition and, as a consequence, have inflicted significant damage to shareholder value in the meantime.

This report presents 11 brief case studies of leading electricity utilities that collectively illustrate the wide variation in readiness for a future of cheap renewable energy.

The singular lesson from the 11 case studies presented here:

Electricity utilities that perform best going forward will likely be those that transition to renewable energy-based business models in a way that avoids the financial damage typically incurred by late movers. Those that avoid or work against the roll-out of renewables will be met by a future that does not include them.